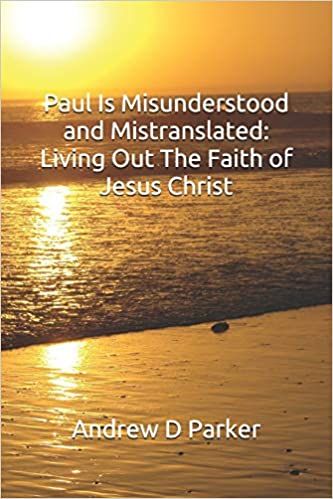 Paul is Misunderstood and Mistranslated: Living Out the Faith of Jesus Christ

After thirty years of studying and researching the Greek NT scriptures, the author of this book discovered that the NT in the Greek is teaching for Jesus’ followers to be on the journey of living out the faith that Jesus Himself taught, lived out and exemplified. Paul was misunderstood by the Protestant Reformers and is still being misunderstood by Protestantism, in part because our Bibles are being mistranslated to agree with the Reformers with regard to salvation. Paul was teaching that obeying God and Christ is required for salvation; only he was rabbinically placing the works of obeying Jesus inside the vehicle of faith. And his “not by works”, something Jesus was not teaching, was aimed at the Judaizers and legalistic Pharisees of his day not those who were striving to do what Jesus instructed and exampled. Some of the confusion is because many do not understand that Christianity is a covenantal-nomistic system (a covenant system with law) which requires obedience to law (cf. John 15:1-17). Paul was teaching obedience to the law of Christ as he was teaching the “faith of Jesus”, the faith that Jesus taught and exemplified. He was not merely teaching us to have faith in Jesus.This book goes through much evidence, including different translations, Greek lexicons and other witnesses showing that Paul was teaching that following and obeying Jesus, being on the journey of living out the faith that Jesus taught, lived out and exemplified, is the type of faith that God is looking for.

Andrew Parker was a successful computer programmer analyst who turned his talent toward diligently searching through the scriptures in their original languages. He holds a master’s degree in Bible and a Master of Divinity Equivalency from Abilene Christian University, and is a member of the faculty of NationsUniversity. He was at the top of his classes in graduate level Greek and Hebrew. He studied Greek and Greek New Testament under Dr. Carroll D. Osburn, a note-worthy New Testament textual critic. After completing his master’s degree at ACU, Andrew spent several decades (much of it full-time) reading, studying and researching the scriptures in their original languages, though his primary focus has been on the New Testament. He has translated much of the New Testament and written much about his findings.