Sisters in Christ brought together by massive California wildfire.

However, the Ventura Church of Christ members never really connected.

In a weekly assembly filled with 150 souls, Hathway, 88, sat toward the back. 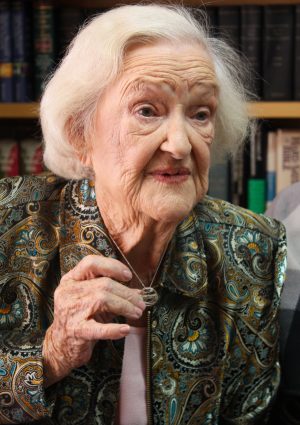 Dee Hathway, 88, shows a free #VenturaStrong necklace, with a diamond, that she received from Fox Fine Jewelry.

“So I had to get him out, take care of him more,” the World War II veteran’s widow said of her quick exits after the closing prayer.

Rabe, who lost her own husband, Tom, eight years ago, occupied a pew up front, taking advantage of the church’s special technology for the hearing impaired.

That meant Rabe, who placed membership in 2014, seldom crossed paths with Hathway, a Ventura church member since Harry Truman was president.

Standing to sing, the women recognized each other’s faces from across the auditorium.

But they had no idea they lived 10 houses apart in a neighborhood known for “its winding streets and sweeping views of the Pacific Ocean.”

Then came the Thomas Fire, the largest wildfire in California’s modern history.

Fanned by powerful Santa Ana winds, the fast-moving blaze — which ignited Dec. 4 — destroyed hundreds of homes in this city of 110,000, about 65 miles west of Los Angeles.

Among the victims were Hathway and Rabe, who escaped with their lives but not much else.

Related: Flames and prayers in California

Since their homes erupted in flames, they’ve relied on relatives, friends and, especially, their church family — including each other.

“The Lord works in mysterious ways,” Hathway said with a chuckle.

“We know each other now,” added Rabe, with a smile. 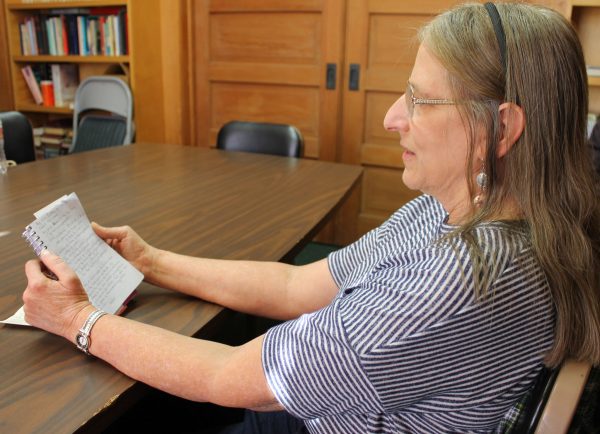 Crystal Rabe, a member of the Ventura Church of Christ, reads handwritten words from Isaiah 61:3 as she reflects on the Thomas Fire.

“Alysa, it’s so good to hear from you,” Hathway told her.

“Aunt Dee, I’m not calling with good news,” Cook replied. “There’s a fire headed right toward you. You need to get out.”

“Aunt Dee, I’m not calling with good news. There’s a fire headed right toward you. You need to get out.”

But when Hathway headed across the street to check with neighbor Howard Miller, she didn’t see any flames on the mountain.

Miller assured her the police would come if an evacuation were needed.

Within minutes, though, flames lit up the sky.

“About eight or nine minutes had passed, and by then, the entire top of the mountain was on fire,” Hathway said. “Actually, it was the most brilliant, beautiful orange.”

At that point, her neighbor urged her to hurry and leave with his family.

However, the diabetic Hathway needed to grab her insulin first, she said. Her grandson Matthew Hathway showed up and told Miller to go ahead. West said he’d make sure his grandmother got out.

Previous wildfires had skipped Dee Hathway’s house — where she had lived for 59 years — so she said she wasn’t too worried.

“I wanted to stop and go pound on the doors of all my neighbors, but Matthew said, ‘No, the police should be here soon,’” she said. “He just wanted to get me out. And we took nothing, except for the insulin.” 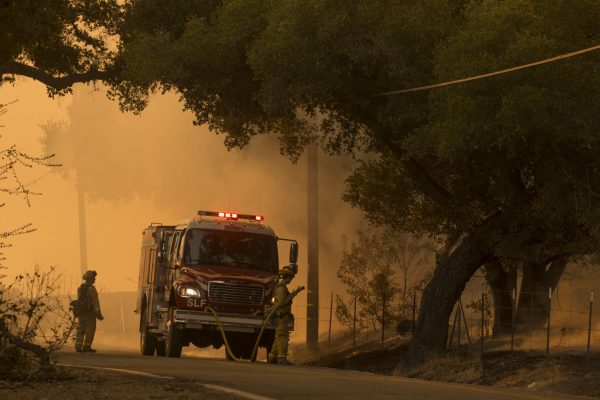 The Thomas Fire destroyed hundreds of homes in Ventura, Calif.

Actually, her grandson picked up one thing on the way out the door: the case containing his grandfather’s Purple Heart, military dog tags and U.S. flag. (Edward Hathway entered the U.S. Navy at age 17 in 1944. Stationed in the South Pacific on the USS Hoggatt Bay, he was injured in an on-deck explosion in 1945.)

Everything else would be lost. 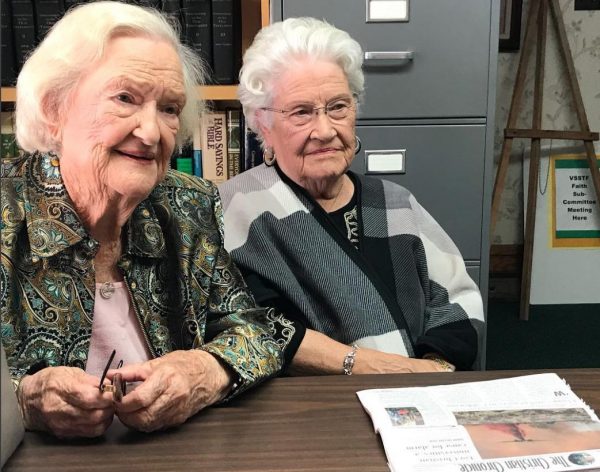 Dee Hathway and Nelda Gemmell, members of the Ventura Church of Christ, discuss their experience with the wildfire. The blaze destroyed Hathway’s home as well as the home of Gemmell’s granddaughter.

She awoke to a firestorm

Before falling asleep the night of Dec. 4, Rabe took out her hearing aids and put them beside her bed.

About 3 a.m. Dec. 5, she awoke to an itching leg. She went to the bathroom and put aloe vera ointment on it.

That’s when she smelled smoke.

“I went downstairs and opened the front door,” she said. “It was just a firestorm out there.”

When she called 911, she learned that authorities had evacuated the area hours before. But she would not have heard banging on her door. She raced to cram her pet birds’ cages into her car before she drove away.

“They’re small, but I wanted to save them,” she said of the society finches. “You could hardly get the door open or stand out there. The ashes were falling like pancakes, and if they hit the ground, they burst into flames. So it was dangerous to be out there.” 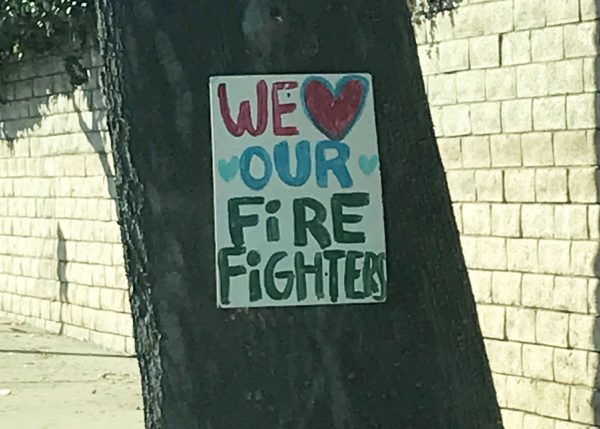 A sign on a tree beside a major street in Ventura, Calif., expresses appreciation for firefighters.

“Every single thing is ashes,” she said of what remains of her personal possessions.

Rabe and her husband had enjoyed collecting paintings. The fire destroyed them all.

“There’s nothing that was able to survive the high heat,” she said.

Beauty rising from the ashes

In the fire’s aftermath, the Ventura congregation turned its attention to helping the victims, particularly Hathway and Rabe.

“They were the first ones we were concerned about,” said Dave Schulze, the congregation’s minister for 29 years.

The Ventura Church of Christ joined with the Red Cross, the local school district and 25 area churches of various denominations to respond to victims’ needs that were not covered by insurance.

“Just keep all of our community in prayer,” said deacon Vernon Alstot, a former longtime firefighter. “There will be some people struggling with a lot for a long time.” 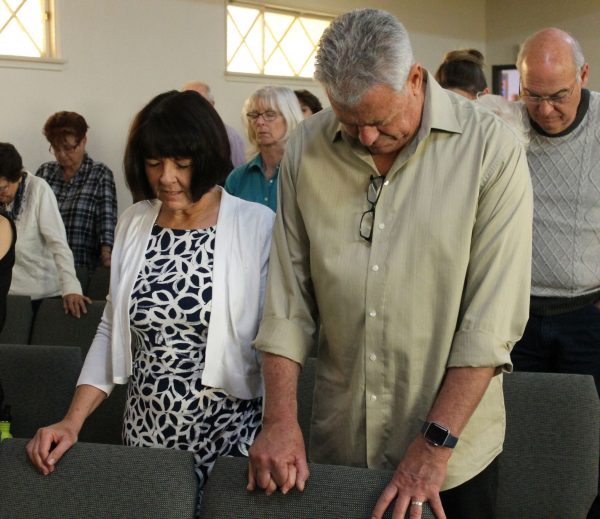 Deacon Vernon Alstot, a former longtime firefighter, and his wife, Denette, pray during a Sunday morning assembly of the Ventura Church of Christ in California.

The Thomas Fire — not fully contained until Jan. 12 — burned 281,893 acres, destroyed 1,063 structures and damaged 280 other structures, according to the California Department of Forestry and Fire Protection.

Both Hathway and Rabe were insured, so their financial concerns were not severe.

But emotionally, they needed — they still need — love and support.

A fellow church member, Joyce Waller, opened her home to Rabe until the fire victim could find temporary housing.

The congregation, meanwhile, knew how disappointed Hathway was to lose all her cherished photos.

“So members of the church went through all of their photos here and made me an album,” Hathway said. “Isn’t that lovely? But you know, it’s just been a hard time for a lot of people in Ventura.”

For Rabe, words from Isaiah 61:3 — shared with her by her sister Natasha Kern — offer comfort: “And provide for those who grieve in Zion — to bestow on them a crown of beauty instead of ashes, the oil of joy instead of mourning, and a garment of praise instead of a spirit of despair. They will be called oaks of righteousness, a planting of the Lord for the display of his splendor.”

In a handwritten note she shared with The Christian Chronicle, Rabe said: “May we all recognize the hand of God and the love of God and the joy of serving the Lord in all circumstances wherein the Lord reveals glimpses of his divine providence. And we in the grace of that moment say ‘Amen’ to all.”

Rabe already has begun the process of rebuilding her home.

Hathway, on the other hand, will live in a small cottage across from her grandson’s place.

“The good thing about this is that now we know each other. God is with us every minute. Jesus stands with us through all our troubles.”

“But I admire you so much,” she said to Rabe. “We’re survivors.”

And now they’re more than familiar faces to each other.

“The good thing about this is that now we know each other,” said Rabe, exchanging a warm hug with a sister in Christ she barely knew before the fire. “God is with us every minute. Jesus stands with us through all our troubles.”

‘Welcome to Pepperdine, where we have 60 mph winds and…