A Hawaiian honeymoon sounded perfect, so Neil and Carolyn Myers decided to fly for the first time.

Taking off, they were a little apprehensive.

“We just held hands and said, ‘Lord, you may be taking us, but we’re coming together,’” Neil Myers joked.

Did I mention that — by the time the couple got around to a honeymoon — they were in their mid-70s and had been married for 57 years?

Their trip came a year and a half ago, but it brought an experience they won’t soon forget. “I’m thoroughly convinced the Lord had a hand in this,” said Neil Myers, a retired preacher who serves as an elder for the West Walker Church of Christ in Carbon Hill, Ala.

What made their island trek so memorable? Not the sand or the waves. Not the tour of historic Pearl Harbor. Not even the travel at 35,000 feet.

Rather, the couple’s introduction to the Church of Christ at Pearl Harbor — a close-knit congregation that has served an estimated 3,000 military personnel and their families over the last 60 years — made a lasting impression.

“We spent the Lord’s day with them,” Neil Myers said. “We were impressed with the worship. It was very spiritual, and the lessons were good.”

Carolyn and Neil MyersMoreover, he and his wife discovered that they knew one of the elders, John Graham, a retired sheriff’s deputy with whom they had worshiped on a Montana vacation a decade before.

Neil and Carolyn Myers learned that the 150-member congregation — the largest Church of Christ in Hawaii — was facing a major financial challenge.

The church near the U.S. Air Force and Navy bases known as Joint Base Pearl Harbor-Hickam needed to raise at least $1.1 million to avoid eviction from the Navy property it had leased since 1956, as The Christian Chronicle first reported last year. The deadline: May 2016.

Otherwise, the Navy planned to “excess” — or sell — the site that houses the church’s main chapel, its parsonage, a classroom facility, a training building and a fellowship hall dubbed the “Aloha Room.”

Members and guests gather for Sunday morning worship at the Pearl Harbor Church of Christ. (PHOTO BY BOBBY ROSS JR.)Church leaders had explored the possibility of a commercial loan. However, banks put a high priority on long-term contributions by permanent members.

That was a problem because 80 percent of the Pearl Harbor membership turns over every three years. Military families stationed at bases all over the island of Oahu receive frequent transfer orders.

“I just couldn’t imagine the government taking over two-and-a-half acres of land that these brethren had for 60 years,” Myers said.

And he couldn’t shake the feeling that God was calling on him to help.

“If you believe that, then you just can’t turn your back on it,” he said.

So the couple made a personal financial commitment, and Neil Myers shared the story at every Alabama church that would let him. “People have responded,” he said. “It’s just overwhelming to me.”

In Colorado, Phil and Sara Sykora also rallied support. The Sykoras attended the Pearl Harbor congregation in the late 1970s when Phil Sykora, now an elder for the Littleton Church of Christ, worked for the Government Accountability Office.

Sara Sykora was baptized there.

“I just think of what a support it was for all the military wives,” she said. “So many of the wives had husbands in the Navy, and they were out in subs for six months at a time.” 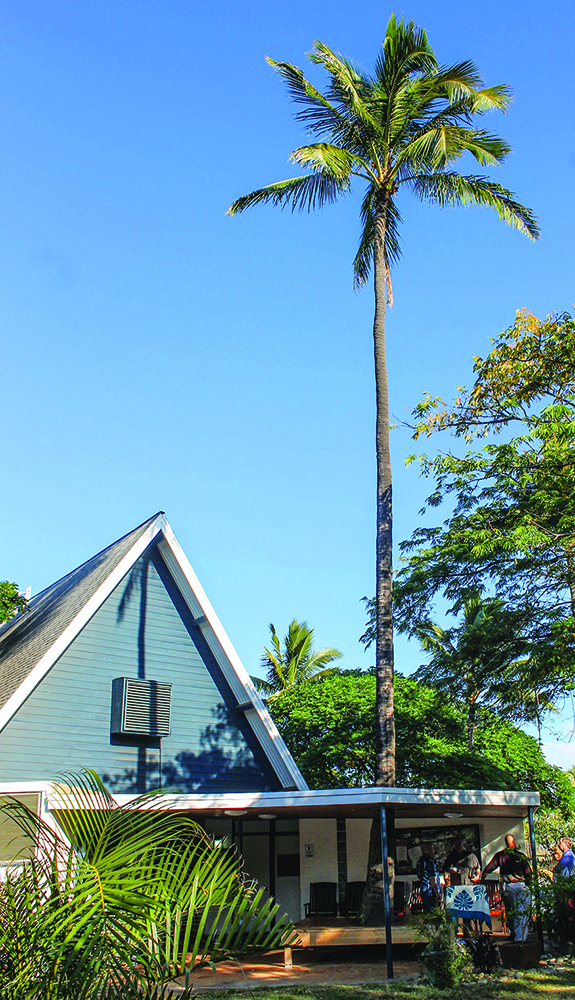 An outside view of the Pearl Harbor Church of Christ’s main chapel in Honolulu. (PHOTO BY BOBBY ROSS JR.)In Nicaragua, missionary Benny Baker and his wife, Donna, likewise felt compelled to give.

“I was one of the 3,000 they touched and kept close to the church by their love and support,” said Benny Baker, who served in the Navy from 1968 to 1971. “I do not remember names, just a lot of special people.”

Here’s the fantastic news: The Myerses, Sykoras and Bakers are just a few of the 395 individuals and 68 congregations that gave. The “lion’s share of contributions” came from Chronicle readers, minister and elder Steve Byrne said.

With funds received and promised, the church has raised the $1.1 million needed to buy the land and pay related fees, elders Byrne, Graham and William Wood said.

“For a small military congregation like Pearl Harbor to have raised the vast majority of the needed funds in just over a year’s time, all the glory must go to God. We continue to offer him our ‘Mahalo,’” Byrne said, using the Hawaiian word for “thank you.”

The church plans to celebrate during a 60th anniversary reunion event June 24-26.

Pearl Harbor members sacrificed to give $450,000 of the total. Women raised money by holding garage sales and selling a potluck cookbook. 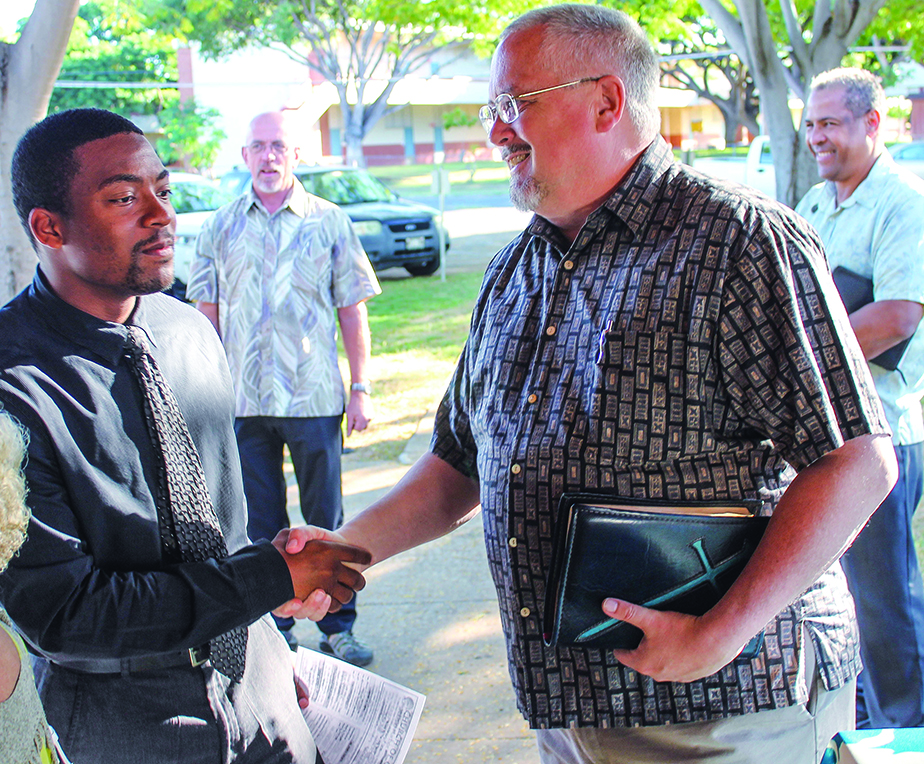 Minister and elder Steve Byrne, right, shakes hands with Ra’heim Bass. (PHOTO BY BOBBY ROSS JR.)“Our paying off the debt early leaves little doubt … that God has a plan,” said Jenni Logsdon, wife of Army Lt. Col. Toby Logsdon, “and no man or seemingly impossible amount of money is going to stop him from blessing and advancing his kingdom. What an exciting privilege it is to be a very, very small part of the amazing picture that is God’s plan.”

Neil and Carolyn Myers also were excited to be a part of God’s plan.

Just don’t expect them to make a habit out of air travel.

“We survived the flights,” Neil Myers said with a chuckle. “I’m not anxious to do it again.”