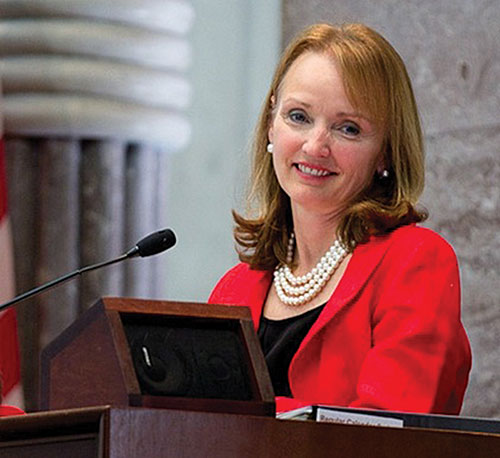 Speaker of Tennessee’s General Assembly says her spiritual support system is vital for staying focused on what matters
Alan Groves
NASHVILLE, Tenn. — On Jan. 11, 2011, Beth Harwell was unanimously elected the first female Speaker of the House in the Tennessee General Assembly.

Harwell, who has completed three terms as Speaker, is a graduate of Lipscomb University in Nashville. She is one of 13 state legislators who identifies as a member of the Church of Christ.

Harwell’s interest in politics began during the Watergate scandal of the early 1970s. While others were losing faith in the political process altogether, Harwell, who remembers watching the hearings with her grandmother, observed the system work out its flaws with stoic fascination.

A native of Pennsylvania, she moved to Nashville to attend Lipscomb. She later earned a master’s from George Peabody College and a doctorate in social science education from Vanderbilt University.

Just a few miles from Lipscomb, at Belmont University in Nashville, Harwell served as assistant professor of political science. She often considered putting what she was teaching into action. Since her first election in 1988 she has thoroughly enjoyed seeing the concepts that she once taught, “jump from the textbook pages and come alive,” she said.

Harwell and her husband, Sam, have three children — Allie, Sam and Tucker.

Earlier this year, Harwell sat down with The Christian Chronicle to discuss her perspective as a Christian woman and politician.
How, if at all, does your faith influence your policy-making decisions?

It influences my values, of course, which affect a couple of different things. Sometimes that might be specific legislation and sometimes it may be the way I conduct myself in the political world, interacting with other members of the General Assembly.
What would you say to Christians who are uncomfortable with actively participating in the political process?

Don’t be. Stay informed, be in touch with your representative or senator and share your thoughts.

On the state level, you can actually make contact with your state representative or senator and they appreciate hearing from constituents.

Engaging is important if you want your values represented.
Do you have a close relationship with the 12 other members of the General Assembly who identify as members of Churches of Christ?

I do have a good relationship with them. There is also a non-denominational Bible study from time to time held in the morning, led by members. I attend that as often as I can.
What strategies do you use to stay spiritually active amidst your busy schedule?

I actively set aside time for prayer or personal Bible study. As I said before, the ability to unplug and do that consistently gives me better perspective.
How important is your church family to your personal life, as a spiritual and emotional support system for a stressful career?

Incredibly important. In politics, sometimes it is hard to unplug and refocus. Spiritual support systems are important because they keep you focused on the most important things in life, like faith and family. If those are strong, everything else falls into place.
Some critics say that Churches of Christ tend to oppress or discriminate against women in the church. What is your opinion on the role of women — both inside and outside the church?

I do not personally see that.

My church family has always been encouraging of me, whatever I wanted to pursue.

I attended Lipscomb, of course and they were also very encouraging — I never felt as though they were discriminatory of me.

When I was elected Speaker, a lot of people made a big deal out of the fact I was the first woman to achieve that. But I am always quick to remind them that it was my male colleagues that elected me and placed their trust in me.
What advice would you give young Christian women who might also be interested in politics?

If you feel led in that direction, do get involved. That doesn’t have to mean running for office. That can mean working in politics or volunteering on a campaign.

Get involved in your community and become a part of some causes and organizations you believe in. Being an active member of your community will ignite that desire for public service.

ALSO ONLINE: Fred Thompson, a former U.S. senator for Tennessee and actor who once ran for president, died Nov. 1 at age 73. He had roots in Churches of Christ and was baptized in Lawrenceburg, Tenn. Read Bobby Ross Jr.’s profile of Thompson.