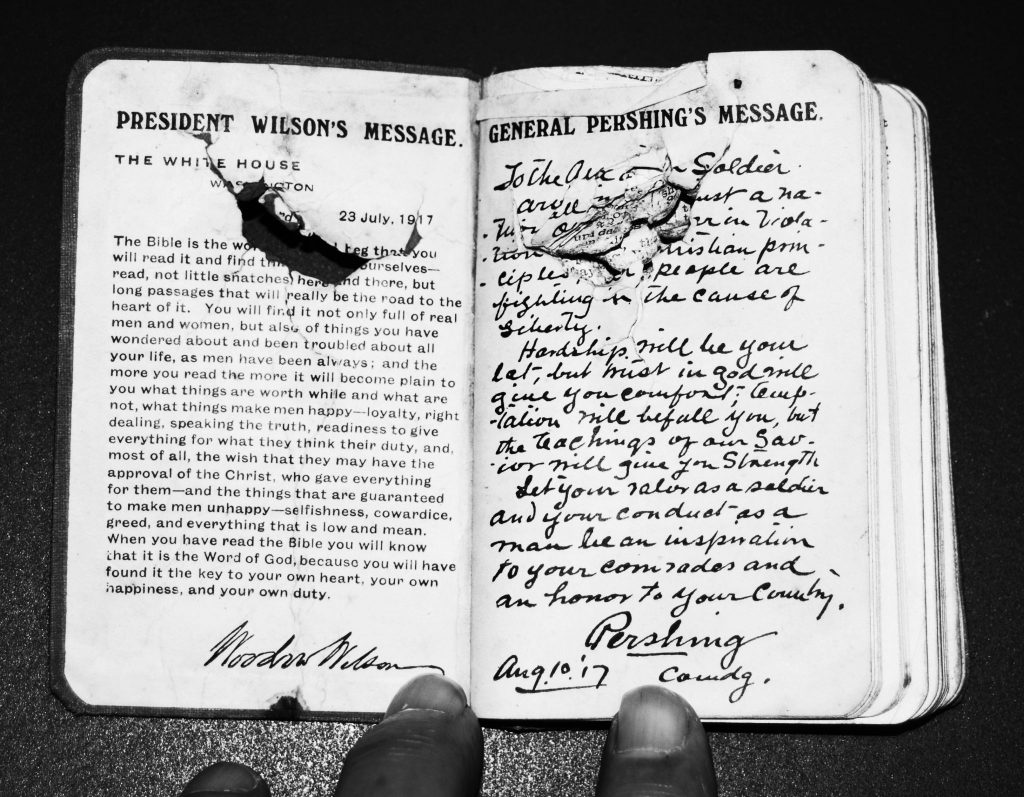 LEBANON, Tenn.— A century-old, khaki-covered paperback New Testament with a hole torn through its pages makes a mighty case for the power of prayer and divine intervention. 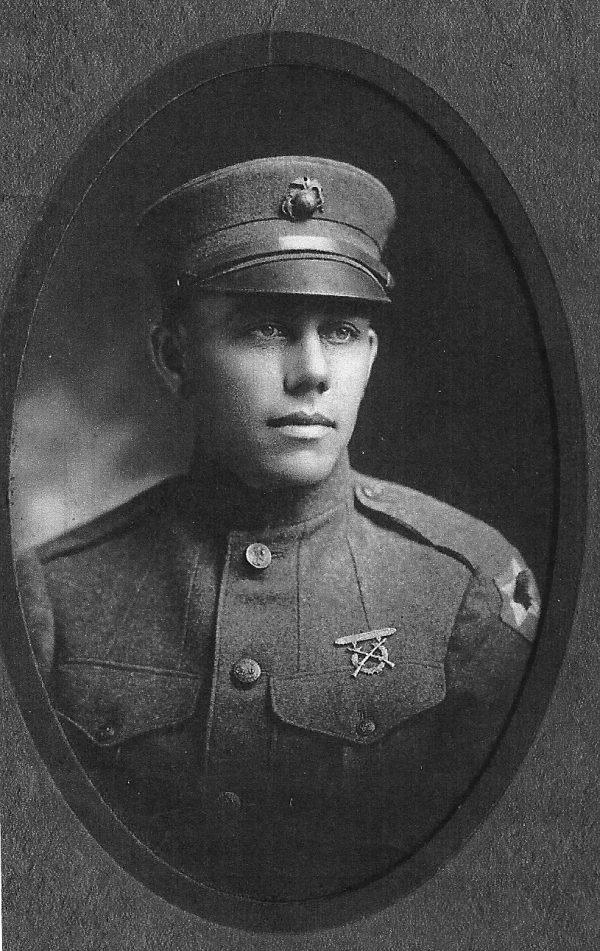 Ross Neal volunteered for the U.S. Marines in 1918.

The family heirloom, plus a cross-shaped medal and a disfigured metallic slug, are treasured by Andy Austin, a member of the Stanton Church of Christ.

They testify to the legacy of his grandfather, Thell Ross Neal, a Marine whose life was spared by the Good Book 100 years ago in the trenches of France during World War I.

“Without the word of God I wouldn’t be telling this story,” said Austin, who was a year old when his grandfather died. One of his earliest childhood memories, burned clearly in his mind, centers on his mother and her sisters all hugging and crying while holding the tiny New Testament they pulled from a trunk.

“Mama really loved him and talked about him a lot,” Austin said. “I feel like I know him from what she and my grandmother told me.”

Neal was born March 5, 1891, in the Smith County community of Grant, Tenn., about 12 miles east of Lebanon. In his early 20s he moved to Winterville, Miss., to work with his brother, Mack, on a cotton farm.

Known affectionately as “Daddy Ross” to his children and grandchildren, Ross Neal labored beside his brother until 1918 when America entered what would soon become known as “The Great War.” 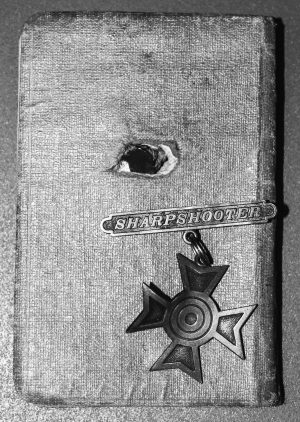 Doctors who treated Ross Neal after the Battle of Saint-Mihiel credited this New Testament and medal with saving the young church member’s life. A piece of shrapnel remains intact in the pages.

Mack Neal, who was married and had a daughter, got a summons to go to war. His brother, who was single, offered to stand in for him. In New Orleans on Feb. 10, 1918, Ross Neal signed up for the Marines.

The 5-foot-8,134-pound Tennessee volunteer traveled to the newly opened Paris Island training facility in South Carolina. The hunting he did as a youth served him well, and he earned a medal for sharpshooting before he boarded the USS Henderson and sailed for France. The 27-year-old saw battle in Chateau-Thierry, Belleau Wood, Soissons and Marbache.

He saw friends get gravely injured.

While visiting one in a hospital, someone gave him a paperback New Testament.

On Sept. 15, 1918, his division fought German troops in the Battle of Saint-Mihiel.

“Before we started our attack one of the officers said, ‘Neal, put that sharpshooter’s medal in your pocket. It offers a shiny target,’” Neal told The Nashville Tennessean as he recounted the ordeal in 1946. “I pushed the metal back in my blouse pocket behind a copy of the New Testament.”

The Germans mortars rained “a shower of shrapnel,” said Austin, remembering details from his mother’s retelling of the battle. “His good buddy on his right got hit and fell to the ground, and he hollered, ‘Neal, help me!’

“He leaned over to help him up and another shell came and a shower of fallen branches fell on them. He reached to get a better grip and another shell went off and he was hit. He felt it hit his right hand first. He was hit in several places and passed out from a concussion.

“The doctor told him, ‘If you hadn’t had that Bible, we wouldn’t be talking to you right now.'”

“When he came to he was in a field hospital lying on an examination table in a tent. When he asked about his friend, they told him he was dead.”

While he had cuts on his hand, arm, side and leg, Neal was told by medics that they found nothing serious. But the soldier felt a strong pain in his chest. It likely was pneumonia from spending nights in the trenches, he was told.

“Then they saw the hole in his pocket,” Austin said. “It was a solemn moment when they saw that quarter fragment of shrapnel that had penetrated the New Testament but had been stopped by the medal over his heart.

“Everybody was stunned. The doctor told him, ‘If you hadn’t had that Bible, we wouldn’t be talking to you right now.’”

THE PAIN OF THE POSTWAR YEARS

Back in Tennessee, Laura Etta Frakes had been praying fervently on her knees for Ross Neal’s safe return. 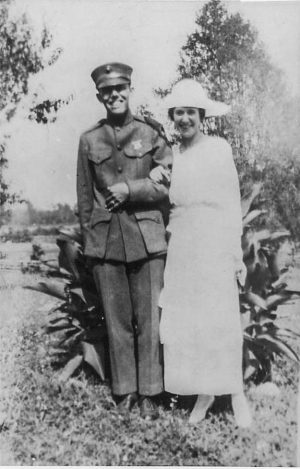 Frakes, a native of Gallatin, Tenn., had met the young man five years before he joined the Marines. Both were attending a gospel meeting hosted by the Silver Springs Church of Christ near Mt. Juliet, Tenn.

“The moment they met they fell in love,” their grandson said. “They kept in touch while he was working in Mississippi, and he came home to visit. They talked about getting married, and then the war broke out.”

After the near-death experience, Neal returned to the battlefield and served until the war ended on the 11th hour of the 11th day of the 11th month of 1918. He concluded his time in Europe stationed on the Rhine River, living with a German family during the occupation.

He received multiple medals for his service, which ended in February 1922. Five months later he and Frakes married and spent their honeymoon in an antebellum mansion in Lebanon, Tenn., that later became Ligon-Bobo Funeral Home, where both of their funerals were held.

Neal worked as supervisor of a cotton farm and operated a general store in Bigley Bend, Miss. But his health rapidly declined. When the family returned to Lebanon in 1938, he was practically disabled.

“He kept having these spells that would come on him,” Austin said. “Nowhere in his military records does it say it, but Mama believed he was exposed to mustard gas, and that affected his nervous system. …

“Later on his doctor told my grandmother, ‘He needs to be kept in constant motion.’ So they put him in a rocking chair every day, and Mama Ross and the five kids took turns rocking him every day until he fell asleep at night.” 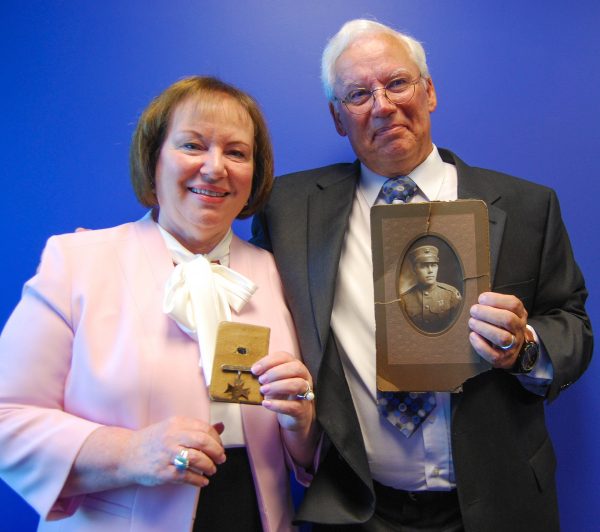 Liz Austin Baines and Andy Austin hold a photo of their grandfather, Ross Neal, and the small New Testament with the sharpshooter medal that saved his life.

‘BETWEEN LIFE AND DEATH’

The family worshiped with the Lebanon Church of Christ, now the College Hills Church of Christ. The Neals’ granddaughter, Liz Baines, is a third-generation member of the congregation and helps in a children’s class just as her mother, Frances, did for decades.

When World War II arrived, “the church knew Daddy Ross’s story, so the elders gave every male member who was in World War II a pocket-sized New Testament,” Austin said.

“If you can’t see God’s hand in this story, you’re blind.”

Ross Neal died Dec. 7, 1954, exactly 13 years after the attack on Pearl Harbor. He was 63. He was laid to rest in Lebanon’s Cedar Grove Cemetery.

“I know that I wouldn’t be here if God hadn’t put the Bible between that shrapnel and my grandfather’s heart. He intervened between life and death right there, and from that life I got life, and I have a wonderful family.

“It’s a sacred thing to us. If you can’t see God’s hand in this story, you’re blind.”

Update: Church of Christ service reinstated at Fort Sill For…