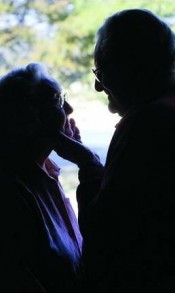 Be my valentine: Couple who met at senior center to exchange wedding vows today

Joanne Bratton
MOUNTAIN HOME, Ark. — Louise Hansen is getting a special Valentine today, in more ways than one.
Hansen, 83, was stunned when a former acquaintance, LeRoy Valentine Jones, showed up at the Van Matre Senior Center six months ago.
She came up to me and said, ‘Do you remember me?'” recounted Jones, 88, smiling at his soon-to-be wife.
“I surprised him, I guess,” she said.
The two met through mutual friends more than 30 years ago and became recently reacquainted in Mountain Home. After a six-month romance, they plan to tie the knot today at the senior center. Both are members of the Mountain Home church.

“We’re both lonely and we needed friendship and companionship,” said Jones. “We have a lot in common.”

Both were happily married for many years but are now widowed. After thetwo became reacquainted in August, Jones called Hansen and asked if shewanted to take a walk in Cranfield Park.

The two are all smiles as they talk about their shared interests.Besides taking walks by the lake, they enjoy playing cards, dominos andbingo at the senior center, where they also eat lunch five times a week.

“We had no idea we’d meet anyone,” Hansen said. “We became friends because we knew about each other in the past.”

Although the couple had talked about getting married on a hill by alake or at the Mountain Home church after a Sunday morningservice, they decided to get married at the senior center with alltheir friends present, they said.

“We’ll be there with friends,” Jones said. “Lunch follows the wedding — but it’s Dutch treat,” he added with a laugh.

Jones grew up in the Iberia, Mo., area and moved to Arkansas fromBelleville, Ill. He worked more than 40 years in sales and nearly 30years in real estate.

Hansen is from the Mt. Vernon, Ill., area and worked in stores and as a bookkeeper in offices.

The two first met in the mid-1970s when they were living with theirspouses in Horseshoe Bend. The couples would get together and play cardgames, like Pinochle and Hand and Foot, Jones said.

The couple hasn’t made plans yet for their future, but want to travel and visit family and friends.

They hope to visit Jones’ daughter, who lives north of Seattle, and mayborrow her motorhome to tour the area. Both enjoy traveling.

Jones said he also may participate in jam sessions at the seniorcenter. He plays acoustic guitar, concertina, harmonica and rhythminstruments like spoons and bones.

Both seem happy about sharing the rest of their lives together.

“I told her, ‘I feel like we belong together,'” Jones said, remembering when he proposed. “She said, ‘I agree.’