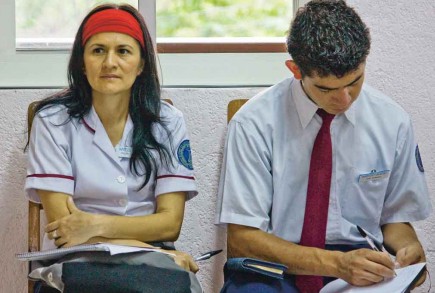 Baxter trains Latinos to reach Latin America — and the U.S.

Erik Tryggestad
TEGUCIGALPA, Honduras — Howard Norton asked the Lord for one more mountain. And he got it.
Fifty years ago, Norton boarded a boat for Sao Paulo, Brazil, to serve as part of a church-planting team. In the years since, Norton served as a pulpit minister and educator at Christian universities in the U.S. In 2008, he preached a sermon at the College Church of Christ in Searcy, Ark., titled “Give me this mountain,” inspired by the teachings of renowned minister Reuel Lemmons.
“Even as I preached, I was thinking to myself, ‘I really would like to have another mountain,’” Norton said.
The mountain he received is a literal one — the Baxter Institute, a ministry training school for Latin American Christians that rises among the peaks of Honduras, surrounded by lush mango trees and majestic European pines.
Launched about three years after Norton sailed for Brazil, Baxter is a focal point for missions in Central and South America. In mid-2009, Norton traded his Portuguese for Spanish and became the institute’s president.
“It would be hard for me to find an educational model better than this one,” he said from his modest office on the school’s campus. “You could take what our students learn about the Bible in four years and compare it to a four-year program at Abilene Christian, Harding University, Oklahoma Christian, Lipscomb, Freed-Hardeman, and it would hold up just fine.”

The institute had its genesis in the suburbs of Mexico City. Harris Goodwin, an entrepreneur and minister for the Hollywood Church of Christ in California, noticed that Mexican ministers were struggling to scratch
out a living. He wanted to help.

He named the school after Leta Baxter, the aunt of longtime Church of Christ preacher Batsell Barrett Baxter. Leta Baxter had a heart for “people who had been chewed up by Hollywood” and showed them compassion, Goodwin said.

In 1978, due to difficulties with the Mexican government, Goodwin moved the institute to an old coffee plantation in Tegucigalpa. Getting permission from the Honduran government wasn’t easy, but God “moved the people that opened the gates, and they keep opening the gates,” said Goodwin, now 85 and living in the Honduran capital.
When Baxter moved to Honduras, the nation had only two or three Churches of Christ, said Miguel Aguilar, one of the first Hondurans baptized here by missionary Dan Coker. The institute helped launch more than 200 congregations across the nation, said Aguilar, who now serves as Baxter’s director of spiritual life.
Now, the institute has about 25 full-time staff and 65 on-campus students from 11 nations. Like U.S. universities, they must take “obligatorios” — required courses in math, science and history — in addition to Bible classes, said Bob Young, chairman of the institute’s board of directors. Students also spend time as interns, working with Central American churches.
Osbel and Madelin Triana came from the island nation of Cuba to train at Baxter. After they complete the program, the Trianas hope to plant congregations in the Cuban province of Mayabeque, home to half a million souls and only two Churches of Christ.
Baxter offers a weekend program for ministers in the Tegucigalpa region and a correspondence program for ministers who live farther away. Ministers across Latin America — even in remote locales — have Baxter correspondence diplomas hanging on their walls.
While many Baxter students plant churches in Latin America, some move to the U.S. Marlon W. Grande, a native of El Salvador, graduated in 1986. He now works as a counselor in Maryland and preaches for a 50-member Spanish service at the Dale City Church of Christ in Virginia.
“Baxter changed my life in so many ways,” Grande said. “It gave me character and direction, gave me the opportunity to be a better man.”
The institute also gave him the ability to see new mission opportunities. In conversations with U.S. Christians, he said, “I have said … you guys are doing ministry efforts in other countries, but the biggest opportunity to evangelize the world is in the United States.”