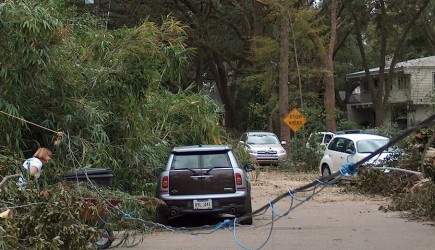 Joy McMillon
Despite the oppressive heat, Goodwood Boulevard Church of Christ members and volunteers in Baton Rouge, La., continued this week offering meals, generators and cleaning supplies to Hurricane Gustav’s victims.
The Category 2 storm pounded the state’s capital city on Sept. 1 killing at least two people, downing trees and power lines and cutting a swath of destruction in a city well upriver and almost 50 feet above sea level. Sustained winds of up to 61 mph and gusts up to 91 mph ripped through the city, cutting off power to nearly 300,000 people. Roughly 60,000 were still without power on Monday, city officials said.
It just goes to show that a hurricane is more than a coastal menace.
“There is a lot more damage here than I expected,” said Mike Baumgartner of Disaster Assistance, a relief effort overseen by the Alachua, Fla., church.
Baumgartner arrived Friday in Baton Rouge, prepared to cook and help coordinate volunteers, a job made easier by the fact that the church’s electric power returned Sunday afternoon after being off for a week.
Baumgartner cooked lunch for 450 people on Monday, and church officials expect to feed 500 to 1000 daily for a couple of weeks. At that point, they will reassess needs and plan for the future, he said.
Some of the worst wind damage occurred in the Broadmoor/Sherwood Forest area in north Baton Rouge, where the church building is located. Power is not expected to return to the area for three weeks, according to Goodwood Boulevard’s minister, Doug Burleson, who was busy delivering meals to the neighborhood Monday afternoon.
“It’s a good time to walk through the community,” Burleson said.  “Most people are sitting on their front porches with the generator going in the garage because they can’t go back to work just yet.”
Nashville-based Churches of Christ Disaster Relief and congregations in Tennessee, Alabama and Mississippi have delivered much-needed supplies, he said. Volunteers have distributed food, water and supplies at the building and in the community. Members from Tennessee will arrive this week to begin setting up Bible studies.
On Sunday morning members conducted worship at the building in spite of the power outage. “We had a great window- and door-lighted worship period,” Burleson said.  About 200 of their regular 300 members attended services in the dark.
The church building’s roof was beaten up by the storm, and a dozen members have had “pretty serious” damage to their homes, he said.
Burleson’s home continues to be without power and hot water. Like other volunteers, he takes advantage of the recently brought-in shower trailer.  “I’m living here at the church building and lovin’ it,” he said.
Goodwood Boulevard played a role in relief efforts after Hurricane Katrina struck the Gulf coast three years ago. An estimated 160 people from New Orleans sought shelter there for 22 days.
Members now are hosting about 20 people in their homes from the 130-member Hollywood Road Church of Christ in Houma, La.