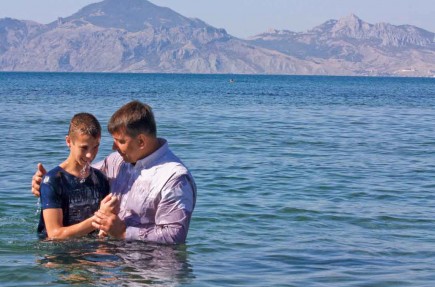 Baptized in the Black Sea

ORDZHONIKIDZE, Ukraine — In waters once patrolled by Soviet submarines, Roman Onischenko gave his life to Jesus.

The 16-year-old was one of 11 people — male and female, young and old — baptized in the Black Sea on a Saturday afternoon.
The new births were part of a three-day conference that drew more than 300 Church of Christ members and spiritual seekers to the shores of Crimea, a beach-lined peninsula in this former communist nation. Church members stepped cautiously around sunbathers to watch their sons, granddaughters, aunts and friends become Christians. Dozens also lined the boardwalk, clapping and cheering as minister Sasha Prokopchuk drew each new convert up from the chilly water.
For Onischenko, baptism in the Black Sea is a family tradition. His father, Valera, was searching for “a pure approach to the Bible” when he discovered the Crimea conference through a television program hosted by Prokopchuk. In 2006, the family attended and Valera Onischenko was baptized.
“And, as it says in the Bible, ‘his whole household believed,’” said Valera’s wife, Irena, quoting John 4:53. She was baptized a year later at the conference. The couple’s daughter, Kristina, followed in 2008 and aunt Svetlana in 2009.
This year, Roman became the final member of the family to be baptized.
The family worships in their home in Novooleksiivka, a tiny town in the center of the Crimean peninsula. Their neighbors think they’ve joined a religious “sect” and are getting money from Americans. They haven’t, and they’re not, the family said.
Irena Onischenko prays for unity among believers and for more young people in their region to become part of the church.
Meanwhile, gathering with hundreds of fellow believers at the conference is an “indispensable” part of the family’s life, she said. The thought of skipping a year “cannot even be discussed. We are here.”

FREE THINKERS AND COZY FEET
When they weren’t on the beach, attendees gathered in a Soviet-era lecture hall, next to a smiling statue of communist leader Vladimir Ilyich Lenin.
Some wore shorts and sandals — and one held a set of giant swim fins — as they sang gospel hymns.
Konstantin Zhigulin, a church member and professional musician in St. Petersburg, Russia, led them in Russian translations of “Holy, Holy, Holy,” and “Shout Hallelujah” and original compositions, including the words of John 3:16 (“For God so loved the world …”) sung in a three-part round.
Prokopchuk talked about the Old Testament story of Esau, who traded his birthright to his brother, Jacob, for a bowl of stew. The minister urged the audience to focus on permanent, spiritual matters instead of temporary needs.
The conference “is kind of like a big battery” that recharges Churches of Christ, said Evgen Sosnovsky, a Christian in the eastern Ukrainian mining town of Dobropole.
Many believers meet in small groups across this vast nation of 45.4 million souls. Prokopchuk’s ministry, which includes the television program, a faith-based magazine and a Bible study correspondence course, has a mailing list of 70 Churches of Christ that are registered with the Ukrainian government and 158 churches, not yet registered, that meet in homes — ranging from two to a dozen Christians each.
The largest congregations meet in the Donbas region, in Ukraine’s industrialized, Russian-speaking east.
Missionaries from Churches of Christ conducted campaigns in Donbas soon after Ukraine became an independent nation in 1991. A church-supported ministry, Eastern European Mission, provided Bibles, which many Ukrainians had never before seen. Hundreds were baptized.
It was more than the faith’s novelty that brought the people of Donbas into the church, Sosnovsky said.
During the Soviet era, “free thinkers” who disagreed with communism had two choices — exile in Siberia or labor in the Donbas mines, Sosnovsky said. “And so, here in Ukraine, people love freedom.”
Sosnovsky, a coal miner, became a Christian in 2002. He ministers for a 30-member congregation in Dobropole. At work, he uses the long, slow descent into the coal mines — which can last an hour — to share his faith.
“In mining, we wear gumshoes,” he said. “And if you stick your foot without socks in this shoe, it will start bleeding and it will be painful.
“The person without God is the same way. There is a soul in his body that is bleeding.  But when Holy Spirit starts dwelling in your body, it’s like rubber around the soul. The foot is warm and cozy.”
MORE THAN A HOLIDAY
Evangelism is harder here than it was two decades ago, Prokopchuk said. People are distracted from spiritual matters by the need to earn money in Europe’s struggling economy.
But many Ukrainians respond to the television ministry, which focuses on Christian daily living, he said.
The show also invites viewers to attend the Crimea conference. Eastern European Mission provides funds for the show and the conference.
Yaroslav Ciesielski, a member of a small Church of Christ in Radom, Poland, traveled here to reunite with his spiritual brothers and sisters. Along the way he joined Vladimir Pestov, a longtime friend who lives in the nation of Moldova, across Ukraine’s western border.
Pestov, who is not a church member, said he was impressed by the gospel lessons at the conference — and especially the a cappella singing, which reminded him of the Orthodox Church back home.
Svetlana Demchenko, a church member in Kharkov, Ukraine, said that worshiping alongside hundreds of fellow Christians “joins us together and makes us one big child of God.”
Demchenko became a Christian seven years ago, after a friend invited her to church.
Demchenko’s father died fighting the Nazis, who occupied the Crimean peninsula during World War II. After her baptism, God became the father she never had, she said.
The conference is more than a holiday, she added. “It’s a chance for all of us to receive God’s blessing — something you can’t measure with anything in the world.”