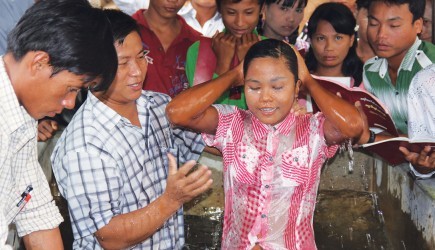 STAFF REPORTS
The Southeast Asian nation, also known as Burma, was devastated in 2008 by Cyclone Nargis, which claimed more than 138,000 lives.
Arkansas-based Partners in Progress fed 9,000 people for a year after the storm, said Bill McDonough, who oversees the ministry, supported by Churches of Christ.
Baptisms followed, “and we have watched in wonder as they changed their hearts and lives and brought their friends to Jesus,” McDonough said.
Ten congregations now flourish in the delta region, he said.
For more information, see www.partnersinprogress.org.