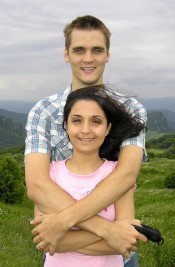 Erik Tryggestad
Two church members spent sleepless nights praying for safety and deliverance after their trip to the Republic of Georgia was interrupted when fighting began with neighboring Russia.
Now home in Kentucky, Gerrit and Rusudan Hopman are praying for the family they left behind — and the estimated 118,000 Georgians forced from their homes during the conflict.
“It’s not really a war — it’s an attack. People’s lives have been devastated,” Rusudan Hopman told The Christian Chronicle from the couple’s Lexington, Ky., home, less than 24 hours after returning to the U.S.
Rusudan, a native of the former Soviet republic, is a fourth-year medical school student at the University of Kentucky. Her husband, who grew up in North Carolina, is a second-year student at the university’s law school. They attend the Southside church in Lexington.
Rusudan’s father brought her to the U.S. in 1995. Then age 13 and suffering from leukemia, Rusudan received a bone marrow transplant at St. Jude Children’s Research Hospital in Memphis, Tenn.
There Rusdan’s father met Marvin Nutt, who introduced the Georgians to the White Station Church of Christ. Church members Earl and Ruth Manning became Rusudan’s host family.
Rusudan was baptized in Memphis and attended Harding University in Searcy, Ark. She met her future husband, a fellow Harding student, during a semester abroad program in Australia. They married in 2006.
The Hopmans arrived in Telavi, a small city in southeastern Georgia, to visit Rusudan’s family on Aug. 7 — the same day Georgian forces attacked separatists with ties to Russia in the province of South Ossetia, about 100 miles away. The separatists previously had attacked Georgian villages, Gerrit Hopman said.
On Aug. 8, Russian troops and tanks poured across the border and began attacking Georgian forces. As the attacks escalated, Rusudan’s father heard rumors that Telavi would be bombed. The family fled to a friend’s house away from the city before making their way to the capital, Tbilisi, where officials at the U.S. embassy were preparing to evacuate Americans.
While spending the night in Tbilisi, the couple heard explosions. The next morning they learned that the city’s military airport had been bombed.
“I felt sure the Russians were going into Tbilisi,” Gerrit Hopman said. “All of the sudden they announced that they were going to stop fighting. Nobody was going to stop them. That was God’s work.”
Embassy officials bused the couple south to Armenia, where they spent the next few days arranging flights home. When they checked their e-mail, their in-boxes were flooded with prayers from their church family, Rusudan said.
Though thankful for their safe return, the Hopmans are concerned for Rusudan’s father, stepmother, brother, sister and grandparents — all still living in Georgia. Though Telavi was spared from the violence, news reports tell of widespread looting, Rusudan Hopman said.
Members of the Southside church share the couple’s concerns.
The church’s ministers and elders “have set a good example for our congregation to be prayerful,” member Rachel Franklin said.
“In this case, our prayer was answered when Gerrit and Rusudan made it home safely. We are still praying for the safety of Rusudan’s family.”