As debates about immigration grip the U.S. in 2018, here's a look back at The Christian Chronicle's coverage of the Mexico border crisis of 2014.

Erik Tryggestad
President and CEO
Editor’s note: This story originally appeared in the November 2014 issue of The Christian Chronicle.

McALLEN, Texas — “Shoes!” A woman yelled the word, emphatically, as she hurried past Dale Fielder, in answer to his question: “Is there anything you need?”

Fielder, an elder of the Church of Christ North in Pharr, Texas, stood between television cameras and tables covered with donated clothes, bearing signs that read “Niños” and “Niñitas” (“boys” and “baby girls”).

As many as 172 immigrants per day have filed through this Respite Center, a brief stop at the end of a 1,700-mile exodus from Central America.

The lucky ones make it to this South Texas city, after spending weeks — even months — wading through alligator-infested rivers and riding atop train cars.

They sell everything they have and pay coyotes, smugglers, as much as $6,700 to take them, illegally, across the Mexican and U.S. borders. Many die along the way — assaulted, robbed or trafficked into sexual slavery. Those who survive arrive here with clothes — and shoes — in tatters.

“It takes real courage,” said Brenda Riojas, spokeswoman  for Catholic Charities, which oversees the  Respite  Center and another one 60 miles east in Brownsville, Texas. Daily, she hears heartbreaking stories from the families — of husbands and brothers killed by gangs in El Salvador, Honduras, Guatemala and Nicaragua.

• From the cartel to Christ

“We truly see them as refugees,” Riojas said. “They’re not coming here on a whim, to get rich. … It’s a means of survival.”

Faith groups of all stripes have pitched in — including the Harvey Drive Church of Christ in McAllen. The church’s minister, Abel Alvarez, is a registered volunteer who brought Fielder here to see how his congregation could help. 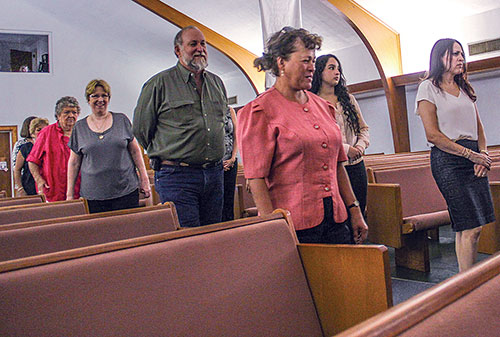 Members of the Harvey Drive Church of Christ in McAllen, Texas, line up to take the Lord’s Supper. Church members are serving immigrants at the city’s Respite Center. (PHOTO BY ERIK TRYGGESTAD)

They arrived just after America Ferrera, a U.S.-born actress of Honduran descent, known for her role on the TV series “Ugly Betty.”

Reporters huddled around the actress as she read a book to immigrant children. She said she hoped to shine a light on the human faces behind the border crisis.

Since October 2013, the U.S. Border Patrol has apprehended 63,000 unaccompanied children — and about the same number of adults with children — near the Mexican border. That’s a dramatic upswing from previous years, though the number declined significantly in recent months.

By law, the Respite Centers serve only families — mostly mothers and children — who make the perilous journey to “el norte,” the North. Unaccompanied children — who sometimes arrive with notes pinned to their clothes, listing the address of relatives in the U.S. — are sent to other facilities.

After U.S. officials clear them for travel, the families visit the Respite Center, where they can take showers, let their children play with volunteers, eat a warm meal and get new clothes and shoes. After a few hours, the volunteers put them on buses to destinations including New York, Los Angeles, Tennessee and Iowa, where they will await court dates for amnesty hearings.

Another 1,700 miles away — in Washington — lawmakers debate whether U.S. immigration policies contributed to the crisis.

Meanwhile, in McAllen, “it’s a real blessing to see that politics are left at the door,” Riojas said, “and the focus is helping our brothers and sisters in Christ.”

The problems of illegal immigration are nothing new for Christians in Texas’ Rio Grande Valley, “but now it’s the worst it’s ever been,” said Dewey Young, an elder of the Harvey Drive church.

He and his family moved to the southern tip of the state in 1978. Then, it was a predominantly Anglo, “you-better-get-in-and-get-a-seat” church of 350, he said. Soon, it added a separate, Spanish-language service. 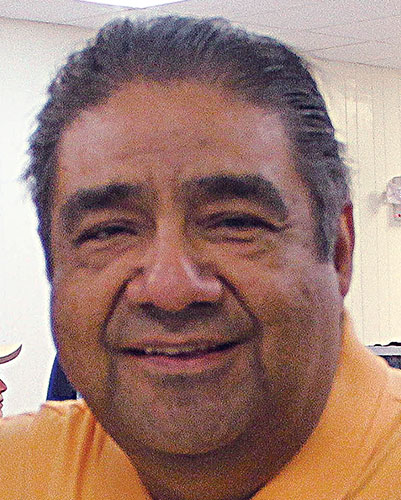 Now the valley, home to 1.3 million people, is more than 90 percent Hispanic. The church has struggled to adjust. On a Sunday morning in the midst of the border crisis, about 40 people — Anglos and Latinos — gathered to worship God.

Alvarez, the church’s preacher for seven years, led hymns in English and Spanish. In addition to serving the church, he serves students in the McAllen Independent School District, where he has helped launch technology initiatives in partnership with his alma mater, Abilene Christian University.

He has attended meetings of Faith Communities for Disaster Recovery, a coalition of churches — including Catholics, Baptists and the Salvation Army — about the border crisis.

Catholics and Protestants don’t often cooperate on projects, he said, but the focus of the meetings is “the logistics of helping people.”

“We’re a small church,” he told the congregation, “but recently, events have conspired to drop something big in our laps.

“I don’t get to dictate foreign policy for the U.S.,” he said. “I wear a Christian hat … and that one never comes off.” 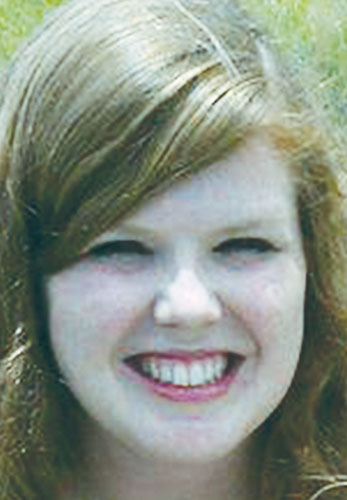 This summer, members of Harvey Drive’s youth group served the immigrants arriving in their community — without knowing it.

The teens traveled 480 miles north to Abilene, Texas, to participate in Kadesh Life Camp at ACU. During the camp, the youths cleaned emergency cots for Global Samaritan Resources, a church-supported relief ministry.

Weeks later, Danny Sims, the ministry’s executive director, drove a truck loaded with the cots and supplies to McAllen, to be used for immigrants.

Lauren Hudspeth, the church’s youth minister, said she was privileged to help — and glad that she could do something for a cause beyond “liking” it on Facebook.

“We can get angry about it and say that it needs to change,” she said of the crisis, “but we must make the change happen, alongside God.”

READY AND PRAYING TO DO MORE

Other churches throughout the Rio Grande Valley are doing what they can to help. In Harlingen, the 8th and Harrison Church of Christ partnered with Healing Hands International, another church-supported relief ministry, to collect Magi Boxes of clothes, toothpaste, soap and other essentials. Each year at Christmas, church members distribute the boxes among the “colonias,” impoverished Hispanic communities of South Texas.

In Pharr, the Church of Christ North has worked among the colonias for 30 years, said elder Craig Cooper. Randal Adcock, the church’s projects coordinator, coordinates a “24/7 mission” to the Latinos in these communities, Cooper said. 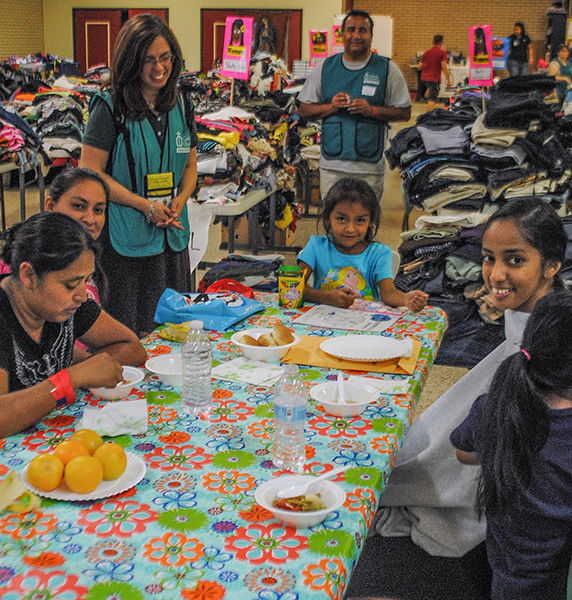 Women and children from Central America receive a meal at the Respite Center. (PHOTO BY LYNN McMILLON)

In the current crisis, Christians will have more opportunities to help when — and if — the government allows volunteers to serve unaccompanied children, Cooper said. Meanwhile, the Respite Center requests jackets, backpacks and phone cards for the people they can serve, he said.

And they still need shoes.

Also, “we have tried to be available as a conduit for funds for those who want to work through a Church of Christ,” Cooper said, “and have gotten several donations for the work.”

At Harvey Drive, Alvarez encouraged his fellow Christians to spend time in prayer, seeking God’s wisdom to navigate a sea of politics as they look for ways to help.

“We get our gas tank filled up on the mountain,” he said, “so that we can go down into the valley to serve.”