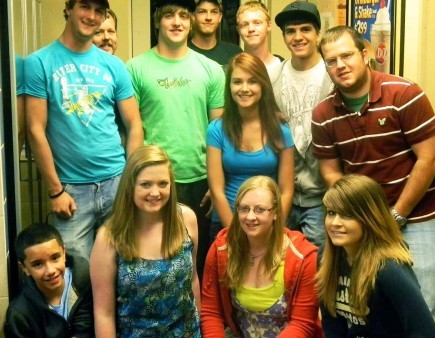 At some small churches, bivocational youth ministers fill a niche

CHEYENNE, Wyo. — Wes Baldwin intends to make a living as a lawyer.

His passion, though, is youth ministry.

A law school student at Faulkner University in Montgomery, Ala., Baldwin said he hopes to return to his childhood home of Wyoming and balance his career with his calling.

“I would hope to go half and half with the church,” he said over cheeseburgers at the 2 Doors Down restaurant in this state capital, best known for its annual Frontier Days rodeo.

For small Churches of Christ that can’t afford to support a full-time person to work with teens, bivocational youth ministers fill a niche.

But she devotes 20-plus hours a week to the teenagers of the 120-member Mountain Avenue Church of Christ.

Many of the teens — products of a free meal program that the Arizona church offered for neighborhood kids years ago — attend church without their parents and live in unimaginable circumstances, Knapp said.

“Sometimes, our members do not understand why one of my teens might think it is OK to serve communion in a white T-shirt,” said Knapp, a graduate of Pepperdine University in Malibu, Calif. “I have to remind them that this teen came with the nicest, cleanest shirt he owns to serve at the Lord’s Table.”

Way up in Maine, Shelly Kellis serves in an unpaid youth ministry role with the 50-member Greater Portland Church of Christ. Over the last 10 years, Kellis has helped coordinate areawide events for teens throughout New England.

This past February, she organized a 17-hour drive by 31 teens and 10 chaperones from three states to the Winterfest youth rally in Gatlinburg, Tenn.

“Our congregations are so small and so spread apart here that gathering teens to worship God and encouraging one another is really a lifeline,” Kellis said. “Often, teens will travel for a few hours just to see one another for a weekend.”

Focusing on relationships, not numbers

After graduating from Freed-Hardeman University in Henderson, Tenn., with a double major in Bible and communications in 2008, Baldwin worked as an intern with a law firm in Bozeman, Mont.

When the 150-member Cheyenne Church of Christ invited him to speak at a youth rally, preacher Mike Schneider asked about Baldwin’s potential interest in serving as youth minister.

In summer 2009, Baldwin moved to Cheyenne to work with the youth group — with the congregation paying him what they could and individual members housing him for a few months at a time.

Before leaving for law school in fall 2010, Baldwin spent 14 months working with the teens. He returned to help part-time youth minister Jordan Dean this summer.

At first, some older members failed to understand the importance of ministering to teens,
Baldwin said. But support grew as the congregation saw the results.

“A lot had never been in a church with a youth minister or even where there was a somewhat-active youth group,” Baldwin said. “They didn’t understand why we met all the time and why I made such a big deal out of pushing the older people of the congregation to encourage the younger ones and to try to have a relationship with them.”

Others put too big an emphasis on numbers, he said. The Cheyenne youth group started with four to six regulars and grew to 15 to 20 participants.

“The blessing is that when people finally started realizing it wasn’t about numbers, the small group that was coming to everything started to really connect and unite,” Baldwin said. “These kids became like family to me, and I got to see them grow so much, not just spiritually, but as overall human beings.”

At the Mountain Avenue church, Sunday morning class draws five to eight regulars, while 12 to 15 teens show up for activities and devotionals, Knapp said.

“One of the blessings of a small congregation is that I can spend time with just a few kids and really develop relationships with them,” she said. “I can go to their marching band performances, choir concerts, football games, school plays, etc.”

The Greater Portland church is down to one teen, Kellis said.

“With such small numbers … it’s a challenge to cultivate hope,” she acknowledged. “Yet, this is where I find such blessings as well, for it’s an authentic faith that is deep and grounded that causes (young people) to desire to connect with one another.”

On a recent Wednesday night, teens conducted the midweek assembly at the Cheyenne church — leading singing, praying and presenting the lesson.

Then they enjoyed ice cream and milkshakes at Dairy Queen.

Bright and early the next morning, the young people returned to the church building to wash cars and raise money for a mission trip to help tornado-ravaged Joplin, Mo.

At Wyoming Bible Camp in Lander, Baldwin announced that the Cheyenne group planned to be active in traveling to youth rallies, work camps and other events. He invited teens from churches without youth ministers to join them.

Michelle Mitchell, a member of the Gillette Church of Christ, began driving her children and other church teens five hours each way to catch up with the Cheyenne group.

“I wanted them to be able to go to any and all church things they possibly could,” said Mitchell, a mother of six children ages 12 to 20. “It’s so neat because now they have friends from all over.”

Teens are drawn to Baldwin, she said.

“You can just tell the Lord lives in him,” she added. “I think we all think he belongs in ministry. We would like for him to come back to Wyoming.”

“We just had some people from the congregation helping out every once in a while, trying to put on little devos at someone’s house,” Williams said. “But we never really bonded until we got Wes two years ago. It just completely changed, and we actually had a group.”

The high school football player added: “It’s just great to have someone there to actually talk to you about things one-on-one. Before we had a youth minister at all, you couldn’t talk to anyone about anything, any questions you have. It’s just been a lot of help.”

Damon Huston, 18, joined the group reluctantly. As Baldwin remembers, Huston traveled with the Cheyenne teens to the Wichita Work Camp in Kansas because his mother made him.

But the experience of working with other teens to paint houses, pick up trash and remove graffiti changed Huston.

“He came back, and he was on fire,” Baldwin said.

Said Huston: “It was just amazing to see everyone working together. It’s like you’ve known them forever.”

Soon after returning home, Huston asked to be baptized.