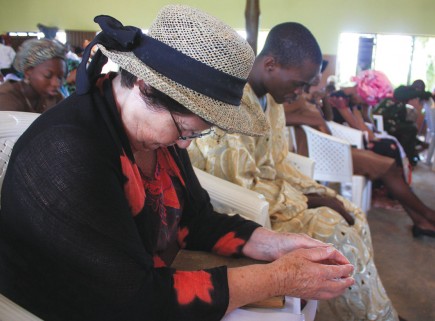 Erik Tryggestad
ABEOKUTA, Nigeria — The crowded market in this West African city can overwhelm the senses of American visitors.
Diesel fumes mix with the smell of smoked fish. Trays of red peppers and giant yams line the streets. The sound of bartering — sometimes intense bartering — fills the air.
Everything here is for sale. Every price is negotiable. And Joyce Anderson negotiates with the best of them. Whether it’s cabbages or cell phone cards, she knows a fair price and rarely pays a naira (Nigeria’s currency) more than she has to.
Anderson, who turns 79 this month, has traveled to Nigeria since 1974, for periods ranging from two months to two years.
The grandmother of seven and great-grandmother of 10 is overseas consultant for Nashville, Tenn.-based African Christian Schools. She’s helped countless American church members obtain entry visas and book tickets for trips to the schools the ministry supports in Nigeria — Nigerian Christian Bible College in Ukpom and West Nigeria Christian College in Abeokuta.
Recently, a group of missionaries arrived in Nigeria to find Anderson waiting for them, with lunch on the table. Long after the men — some less than half her age — had gone to bed, she used the precious few hours of government-supplied electricity to sort through forms on a laptop computer. The forms will allow a container of supplies to reach Christians at the two schools.
In Nigeria and Nashville, Anderson uses “every ounce of her energy to enable good works in Africa,” said Henry Huffard Jr., a former missionary to Nigeria and a member of African Christian Schools’ board of directors.
“She is not free from the physical discomforts of age,” Huffard said. “But she refuses to quit.”
‘WHEREVER THERE’S A NEED’
Endurance has defined Anderson’s life, longtime friends told The Christian Chronicle.
A few years after her husband left her, she was baptized at the Northside church in Spokane, Wash. A single mom of two daughters, she worked at Magic Valley Christian College in Albion, Idaho, and Baker, Ore., before the school closed in 1970.
Lucien Palmer, a former missionary to Nigeria, traveled to Oregon to recruit workers for Michigan Christian College, now Rochester College, where he had served as president.
Anderson and her daughters moved to Rochester Hills, Mich., where she worked as a secretary for Palmer, who became the college’s chancellor.
In 1974 Palmer decided to focus all of his efforts on African Christian Schools, which he helped found in 1959. He asked Anderson to follow him to Nashville and then to Nigeria as he and his wife, Ida, made regular visits.
For the next three decades Anderson became a part of the Ukpom school, cataloguing books in the library, filing records in the business office and serving as hostess for visiting missionaries. Navigating eastern Nigeria’s dirt roads on a scooter, she traveled to remote villages to train women in children’s ministry. She continued to make annual trips to Nigeria after Lucien Palmer’s death in 2004.
In Abeokuta, she helps in the library and registrar’s office at the western school, launched by Nigerian Christians in 1999.
Her defining characteristic is her desire to help “wherever there’s a need,” Ida Palmer said. “Whoever it is — young or old, black or white, rich or poor — she always seems to find them.”
‘BECOMING MORE AFRICAN’
Stacks of forms, traffic snarls, power outages and market bartering can be frustrating, but the faith and perseverance of Nigerian believers inspire Anderson to work without complaining, she said.
For many Nigerians, Anderson is a source of inspiration.
“Here in Nigeria we call her ‘akamba mma,’ which means ‘big grandmother,’” said John Ekpo, director of the ministerial program at the Ukpom school.
She’s also known as “the iron lady of African Christian Schools,” Ekpo said. “She has been our best librarian, accountant, computer operator, auditor — and a teacher.”
Just hearing Anderson’s voice gives students a sense of acceptance and encouragement, said Godwin Ekpodikpo, a graduate of the Ukpom school who moved to Abeokuta to teach in the western school.
“She wears locally made dresses. She even picks up on our dialects,” Ekpodikpo said. “Though she is an American in the body, I think inside she is becoming more African.”
Her children — and grandchildren — worry about her safety, but know how important she is to Christians in Nigeria.
“It’s like she says, she’s in the Lord’s hands,” said her daughter, Holly Shinsky, a member of the Northside church in Farmington, N.M.
Nonetheless, Anderson said, “Every trip the last few years I’ve thought, ‘This is probably my last trip.’”
While scheduling this visit, she debated whether to apply for a single-entry visa or one that would allow her to enter multiple times in a year. She decided on a multiple-entry visa, since the price was the same.
“Of all things, they gave me multiple entry for two years — which they’ve never done,” she said. The Nigerian government — or perhaps an even higher power — thinks she’ll be coming back.