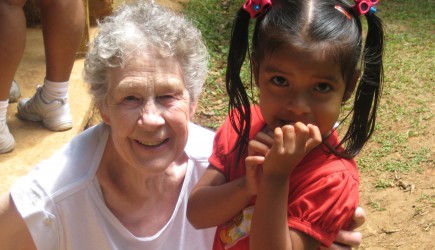 staff reports
SEARCY, Ark. — Like many Harding University students on a recent spring break mission trip to Panama, Betty Fulop of Athol, Idaho, was compelled to work with the elderly, poor and abused. Unlike other students, Fulop already had experience in all three areas.
Fulop, 76, known as “Miss Betty” to her classmates and professors, is the only full-time Harding student who can claim five children, 15 grandchildren, and “five and a half great-grandchildren.” The sixth is due this summer.
She has become well-known to many Harding students since arriving at the university last fall.
Her journey to Harding was a long one. Her life has not been easy. She was abused at age 5 and married the first of three abusive husbands at age 17, she said. Fulop has experienced life on welfare and seen two of her children spend time living on the streets.
She has been widowed since 2000.
“I’ve been very poor, not knowing where my next meal would come from,” she said. “I’ve always had these dreams, though, and I’ve had to go through a lot of preparation to reach those dreams. Some of that preparation has been suffering.”
Fulop began attending a Church of Christ in Wisconsin in 1960 after her father, son and sister got involved with the church. She was baptized in 1976 and heard about Harding through her involvement in the church.
“I thought it sounded like a great Christian school,” she said. “I decided if I ever went back to school, I’d want to go to Harding.”
Her goal is to work with abused women, which is part of the reason she decided to go to Panama this spring.
She believes her life story demonstrates God’s grace, and she saw the trip as an opportunity to show that grace to others.
“God has given me all this energy and desire,” Fulop said. “It’s him, not me.”