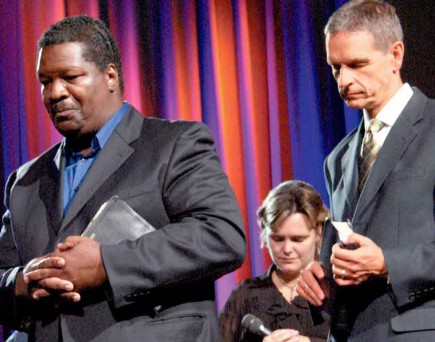 At 100-year anniversary of split, ministers exchange Bibles at convention

Bobby Ross Jr.
Editor-in-Chief
LOUISVILLE, Ky. – Jeff Walling blinked back tears as he held out his worn personal Bible — the one his 89-year-old mother, Mildred, gave him in memory of his late “earthly father,” T.J.
Walling, minister of the a cappella Providence Road Church of Christ in Charlotte, N.C., had studied and preached out of this same Bible for more than a decade, evidenced by a tattered handful of pages that he pulled from Ephesians.
But on this night, after preaching to thousands at the North American Christian Convention, Walling presented the Bible to Dave Stone, minister of the Southeast Christian Church in Louisville.
“I want to tell you tonight, you are my brother,” Walling said to Stone.
Stone handed Walling his own Bible and told him: “The great thing about these Bibles is that they are exactly the same. They are the same translation. They are God’s word.”
In an emotional display of love and acceptance, several prominent leaders of a cappella Churches of Christ and instrumental Christian Churches joined Walling and Stone in exchanging personal Bibles. Walling challenged the 6,000 people who packed the Kentucky International Convention Center that night to go home and do the same.
“Are you willing to go home and shape the future of our brotherhood for our children by reaching out because of grace to say, ‘I love you in the name of Jesus Christ, brother?’” Walling asked the crowd. “And if somebody says, ‘Well, he’s a brother in error,’ you tell him, ‘Do we have any other kind?’
“We are all in error,” Walling added. “That’s why we come every Sunday to say, ‘God, forgive us.’”
Almost everyone in the audience — which convention organizers said included as many as 1,000 members of a cappella congregations — stood and accepted the challenge.
The dramatic exchange of Bibles capped the third, and final, night of the annual non-voting, lectureship-style meeting of Christian Churches. Besides Walling, a cappella leaders who participated in the Bible exchange included ministers Marvin Phillips and Jerry Taylor as well as Abilene Christian University President Royce Money and Rochester College President Mike Westerfield.

INSTRUMENTAL MUSIC REMAINS DIVISIVE
With the theme “Together in Christ,” the recent convention focused on fostering better relations between the instrumental and a cappella fellowships after a century of division. This year marks the 100th anniversary of a 1906 federal census that first reported the two Restoration Movement groups as separate bodies.
Today, the a cappella churches report about 1.3 million baptized members in the U.S., slightly more than the instrumental churches’ 1.2 million. Both groups believe that Jesus is Lord, baptize for remission of sins and offer the Lord’s Supper each Sunday. But disagreement remains over the issue of instrumental music, as many Church of Christ members consider it a doctrinal issue, not a matter of preference.
Cecil May, dean of the College of Biblical Studies at Faulkner University in Montgomery, Ala., said some of his preacher friends in “progressive congregations” tell him they consider a cappella services a nice tradition that they do not intend to abandon. But they do not believe instrumental music is wrong, May said.
“Obviously, their approach to unity and fellowship with our instrumental brothers will be different from those of us who believe instrumental music is an unauthorized addition to what God has indicated he wants … in worship,” May said.
A MIX OF INSTRUMENTAL, A CAPPELLA HYMNS
The session at which Walling spoke mixed instrumental and a cappella hymns as praise teams from the Richland Hills Church of Christ in Texas and the Southside Christian Church in Orlando, Fla, performed together.
Keith Lancaster from the group Acappella led a non-instrumental rendition of Awesome God, followed by both praise teams singing a modern-day Rock of Ages, accompanied by a piano, drums, electric guitars, a trombone and a trumpet.
In a message titled “Together in God’s Grace,” Walling said he once believed that a cappella singing was the only way to worship. But he said God helped him grow to understand that grace, not perfect doctrine, saves Christians. Walling recalled that his mother taught him to be nice to strangers. “So, for years, that’s what I’ve done with folks in the independent Christian Churches,” he joked.
But he declared, “The time for being nice is over. It’s time to be family. … Nice is easy. Family is a mess. Family is loving and sacrificing. Family is trying to compromise without being compromised.”
David Faust, president of the North American Christian Convention, said he hoped members of both fellowships across the nation would repeat the exchange of Bibles. “This is a gesture of friendship and kinship, a way of saying, ‘I’m trying the best I can to teach God’s word with all my heart and I know that’s what you’re trying to do, too,’” Faust told The Christian Chronicle.
‘I’VE GOT TO TRY’
Tony Boyd, minister of the instrumental First Christian Church of Jasper, Ga., said the convention inspired him to want to go home and contact a local Church of Christ minister.
“I’ll knock on his door, and we’ll either sit down and talk or we won’t,” said Boyd, whose wife, Marcia, plays the piano at their church. “He may not want to have anything to do with me. But I hope he does. I’ve got to try.”
Daniel Daugherty, youth minister at a Christian Church in Roy, Utah, and his wife, Christina, said they would like to work with Church of Christ counterparts to share the true gospel with the predominantly Mormon state.
“It’s my dream to bring everyone together,” said Daniel Daugherty, 25. “When someone looks at Utah and says there’s only four New Testament churches in the state, I can say, ‘No, there’s 10 or 15.’ That’s what I want to see more than anything.”
Wyane Atkinson, minister of Northwest Church of Christ in Glendale, Ariz., said Christian Church members at the convention treated a cappella participants as their “long-lost brothers and sisters” and impressed him with sound, in-depth Bible study.
“If our brethren want to argue about baptism, elders, weekly communion, the ‘priesthood of all believers,’ the ‘inerrancy of the Scriptures’ or the plea to separate from denominational attitudes and practices, then they’ll have to go somewhere else than among the godly people I met in Louisville,” Atkinson said.