Victor Glover will rely on his Bible and prayer to help with isolation at the International Space Station.

Online worship during the COVID-19 pandemic has helped prepare Victor Glover for a long-awaited work trip.

Where Glover is going — 250 miles above Earth to the International Space Station — there is no physical church building.

“I actually sent up communion cups and a Bible, and we have really good internet connectivity,” said the NASA astronaut, one of four crew members for the SpaceX Crew Dragon’s first operational flight, set to launch this weekend.

“So honestly, I will probably continue in what we’ve been doing: virtual service, virtual giving, reading my Bible and praying,” added Glover, the pilot for a team that also includes NASA’s Michael Hopkins and Shannon Walker and Japanese astronaut Soichi Noguchi.

Glover, a Church of Christ member in the Houston area, discussed his faith with The Christian Chronicle while making preparations for a six-month mission to the space station.

Glover’s first trip into space will give him a view of the heavens and the earth — which Genesis 1:1 says God created in the beginning — that few in history have experienced.

What might be going through his mind as the spacecraft soars high above the clouds?

“I have a job to do. Sometimes that gets lost in the emotion of it,” Glover replied. “I’m looking forward to looking out the window and taking the pictures and taking in the moment.”

Related: Launch was successful. Might the moon be Glover’s next destination?

But most importantly, he said, he must focus on his job and Crew-1’s safety.

Once at the space station — a world-class lab orbiting Earth — the astronauts’ activities will include scientific experiments, robotic operations and space walks.

“I want to use the abilities that God has given me to do my job well and support my crewmates and mission and NASA,” he said. “That’s really the thing I think the most about.”

"It's really special today because we flew an airplane in here, but the plan is for us leave on top of a rocket." – @VicGlover of @NASA_Astronauts anticipates the Nov. 14 liftoff from @NASAKennedy of the NASA @SpaceX Crew-1 mission. pic.twitter.com/H2bUXWY68f

‘Do not be anxious’

Before joining NASA in 2013, the 44-year-old Navy commander flew combat missions in Iraq and served as a legislative fellow to the late U.S. Sen. John McCain, himself an acclaimed naval aviator.

“Just in general, before I go and even get in an airplane to go on a flight, I say a prayer, and I always think about my family,” Glover said. “If I don’t see them directly for some reason, I’ll send them a note, a text message, because I do a very high-risk thing.

“I’m not in combat anymore being shot at, but there’s still a risk,” he explained. “So I always want to make sure that, ‘Hey, if today is my day, I’ve told my family, I’ve told my girls that I love them, and I had a chance to commune with God directly.’ And then I go and do what I need to do and feel good about it.”

That said, he allowed for a bit of awe: “It’s going to be interesting to walk up to a rocket that’s really active and ready to go and has all those noises and sounds and know that I’m going to ride that to 400 kilometers up and then live there for half a year.”

For Dionna Glover, the approaching launch date brings a mix of emotions. 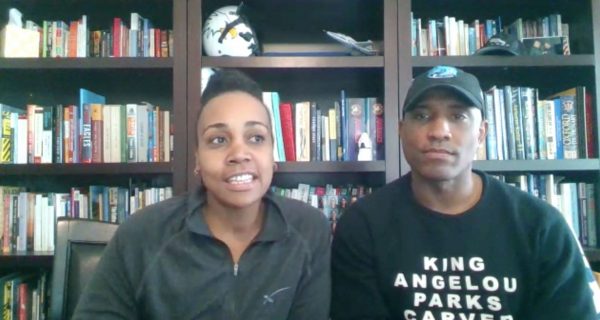 Dionna Glover and her husband, Victor, talk about their faith during an interview with The Christian Chronicle.

“Of course I’m excited, but it’s also a little scary,” she said, seated beside her husband in a Zoom interview. “I’m nervous. I’m excited for him. I have Scriptures that I’m reading regularly to try to remind myself not to worry and not to stress.”

One of those Scriptures is Philippians 4:6: “Do not be anxious about anything, but in every situation, by prayer and petition, with thanksgiving, present your requests to God.”

Still, she acknowledged with a laugh, “I may be a basket case here once he leaves the planet. I’m praying that I won’t be.”

Both California natives, Victor and Dionna Glover met in the 1990s as students at California Polytechnic State University, where the future fighter pilot and astronaut studied engineering.

Dionna grew up in the Pinole Church of Christ, about 20 miles east of San Francisco. Her parents, Michael and Jocelyn Odom, still attend that congregation, where her father serves as an elder.

“I’ve always been a student of theology, I would say,” Victor said. “But I wasn’t as focused on studying and growing until I met Dionna, and then through college and into our married life, I got back to attending on a regular basis.

“So I would say that as we’ve grown our family, that’s really when I’ve started to develop a real, true appreciation of my own faith and not just the academic.”

“They have an incredible drive to produce faith in their children. They are very invested in family and making sure church and God are at the center of that.”

“We’re just trying to make sure that with these interesting times, our family is doing what would make God happy and not necessarily what we want,” Victor said. “Attending in person (during COVID-19) is not the right thing for us, but we still want to make sure we’re doing what we need to do.

“It is very important to our family and bringing up our kids,” he added, “so we still attend as a family even though we’re doing it virtually. And like I said, we’re kind of supporting three different congregations in doing so.”

“They have an incredible drive to produce faith in their children,” Shoulders said. “They are very invested in family and making sure church and God are at the center of that.”

Check out pictures of the @SpaceX Falcon 9 rocket and Crew Dragon spacecraft being rolled out at Launch Complex 39A ahead of the launch of Crew-1 to @Space_Station. 🚀📷 – https://t.co/6OY3kX0Dni pic.twitter.com/ocqwj4H6qK

Since the start of the space program in the 1960s, fewer than 600 people have gone into space — about two-thirds of them Americans.

Glover is the first Black astronaut assigned to a long-duration mission.

“It is bittersweet because I’ve had some amazing colleagues before me that really could have done it, and there are some amazing folks that will go behind me,” he said. “I wish it would have already been done, but I try not to draw too much attention to it.” 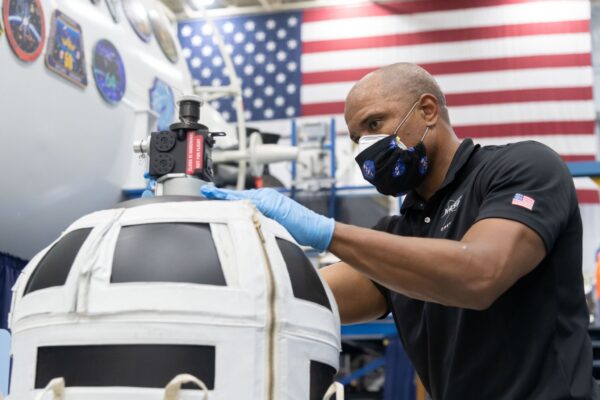 NASA astronaut Victor Glover trains in preparation for a six-month mission to the International Space Station.

Social isolation is part of what Glover will experience in space.

The pandemic has provided some unexpected lessons in dealing with that.

“We (at NASA) do a lot of different types of team training, and some of it is just to build resilience so you can handle being up there in isolation,” Glover said. “It’s important to have different ways of finding encouragement, and for me, my family and my church and my Bible and praying are going to be a big source of that.”

Dionna said she and her daughters will remain careful and try to avoid the virus even as Victor begins his mission.

“The risk won’t go away just because he leaves the planet,” she said. “Fortunately, NASA has provided lots of opportunities for us to keep in touch, and I’m hoping we can still study together, worship together, and figure out ways to still do that as a family while he’s gone. 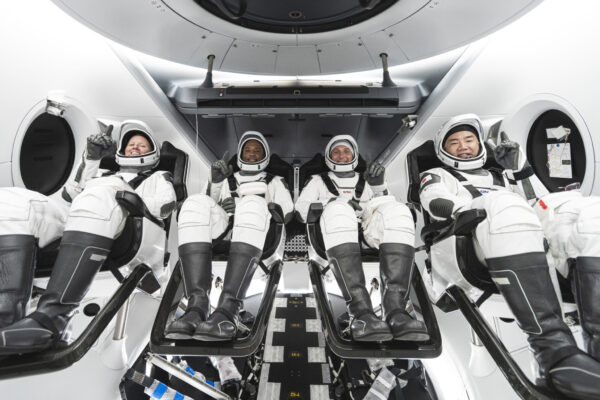 “Once it’s safe, we’ll return to in-person activities and in-person worship and Bible studies,” she added. “But I’m in no hurry to make any huge changes.”

Dionna will get a special iPad that she can use to communicate with Victor and videoconference with him.

“One of the things I was hoping, before this pandemic, was that she would take it with her to church and just log in, and I could just sit there and watch and kind of just sit next to her in worship services,” Victor said. “We’ll see if they’re back in regular, physical services soon or not.”

Either way, cyberspace will make family worship possible for an astronaut in outer space.

Might the moon be Christian astronaut Victor Glover’s next destination?

Before blasting off Nov. 15 on a six-month mission to…