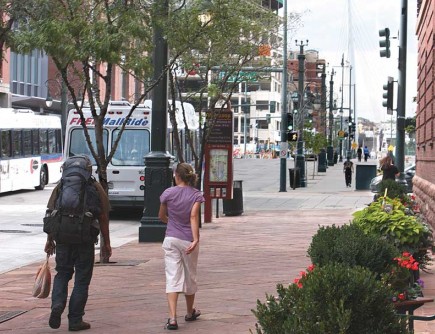 ‘Ask me why you deserve to go to hell.’

Erik Tryggestad
DENVER — I thought that headline would get your attention.
I’m not taking credit for it. I stole it from a column by Zach Smith, a worker with the Dry Bones urban ministry in Denver. You can see Zach’s column online here.
Zach doesn’t claim rights to the headline either. He saw it on a handwritten sign (alongside other slogans, including “Homo sex is a threat to national security” and “Baby killing women … God will judge you”) held by a protester during the Democratic National Convention in Denver earlier this year.
The protesters, who called themselves Christians, came to Denver to decry the political stances of the Democrats on hot-button issues including abortion and same-sex marriage. During their street vigils, the protesters yelled some pretty nasty things at the city’s residents, including some of the homeless youths served by the Dry Bones ministry.
“I felt a heavy sadness because Jesus, for many of these people, was now associated with threatening language and hatred,” Zach said. “I even felt shame — shame because, since I am a Christian, I was involuntarily associated with this hate rally.”
The Dry Bones ministry has broken the associations a lot of youths have with Christianity. It’s really hard to define exactly what Dry Bones does. It’s a relationship-based ministry.
Evidently Denver is full of services for the homeless — that’s part of the reason that so many young runaways and addicts come to the Mile-High City. The Christians with Dry Bones didn’t want to reinvent the wheel, so they focus on befriending the youths they serve.
“We aren’t a soup kitchen, counseling center or drop-in shelter.” That’s what one of Dry Bones’ board members, Shanta Murray, told me in an interview after I returned to Oklahoma. “We are in the reconciliation business with street kids — to their families where appropriate, to Jesus and the church, and to the community around them that tries not to see them.”
On a fall afternoon shortly after the Democrats left Denver, I followed Zach and Rebekah Duke as they walked through the city’s crowded downtown. I kept waiting for us to enter the slums — where I thought we’d find homeless people.
But that never happened. The youths served by Dry Bones were mixed in among the crowds of businesspeople and tourists. Some of them worked at kiosks on busy corners. Others were sprawled across blankets in city parks. In the shadow of the Colorado state capitol, one of the youths lit a marijuana joint. All the while, people in business suits walked by, oblivious to the subculture under their noses.
These kids were smart — not just street smart. They talked about people who had stolen from them and how they intended to pay them back. But they also talked about politics and sports. One of them, Nick, informed me that autumn had officially begun at 9:44 that morning. I had to look that up on the Internet when I got back to the office. He was right.
My favorite moment from the experience happened while Rebekah and I were talking to Nick on a downtown bench. A guy with long, tangled dreadlocks, a scraggly beard and an old Army surplus coat sat down near Rebekah. He hunched over the bench and started picking at invisible microbes. I’m not sure what he hoped to find.
I was already a bit rattled from my brief time with the Dry Bones folks — a walk well outside my comfort zone — and this guy unsettled me all the more. Rebekah, meanwhile, waited patiently for him to finish his search and look up. She caught his eye and said, “Hey Steve.”
Actually, I can’t remember if his name was Steve. But what fascinated me was how a hint of humanity seemed to return to his face because of that simple greeting.
“It is one of the hardest parts to communicate about the homeless — they want to be acknowledged, just like the rest of us,” Shanta Murray said. “Their tattoos and piercings may be intimidating, but so is your suit and tie.”
Dry Bones’ workers and board members told me that the ministry has made them keenly aware of how God sees all of us. It’s so easy to rush to judgment when we encounter the homeless. We can’t imagine ourselves in their position, but the truth of the matter is that we’re all far from home, regardless of where we lay our heads at night.
That hateful sign is right. None of us deserve heaven. None of us deserve God’s love — whether we live on the streets of Denver or in warm houses in Oklahoma.
As the holidays approach, I’m thankful that we serve a God of second, third and thirty-third chances. I’m also glad that we have ministries like Dry Bones, practicing street-level evangelism.