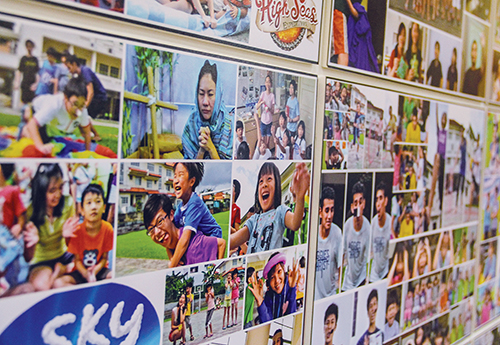 In Singapore, the Moulmein Church of Christ prepares to demolish and rebuild its 55-year-old home

Erik Tryggestad
President and CEO
SINGAPORE — Go ahead, write on the walls.
And fill them with lots of pictures — of friends, smiles, games, baptisms. Don’t worry about the tape peeling the paint.
It’s all coming down anyway. 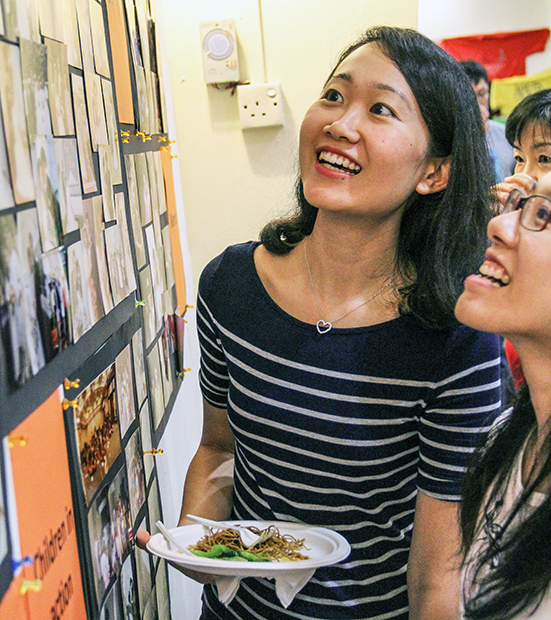 • The faith of ‘Tattoo Tan’

• Road Notes: A Lord’s army — but no snowmen — in Southeast Asia

There was a sense of relaxed liberation — rare in this Southeast Asian city state known for its Swiss watch precision — at the Moulmein Church of Christ. Believers from across Singapore, neighboring Malaysia — even Australia — leisurely perused the walls of memories and laughed as they said goodbye to the congregation’s 55-year-old home.
The building, sandwiched between a massive Buddhist temple and a Hindu center, is well-loved among Churches of Christ in Southeast Asia. It’s also well-used, as its creaky, uneven floors testify. Bringing it up to code would cost 2 million Singapore dollars ($1.6 million U.S.), said Dave Hogan, one of the church’s ministers.
Instead, the Christians decided to demolish and rebuild it.
The price tag for the new, four-story facility, which will double the church’s space, is 6 million ($4.8 million U.S.). Members and supporters already have raised or pledged half that amount, said Chan Kim Kai, another of the church’s ministers. The project will take two years, during which the church will meet in a nearby hotel. 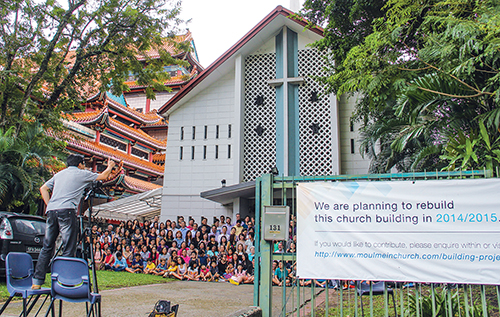 As worshippers beat drums and chant at the massive Buddhist temple next door, members of the Moulmein Church of Christ take a final group photo in front of their building. (PHOTO BY ERIK TRYGGESTAD)
The rebuild seems appropriate in a city on the forefront of Asia’s economic boom — where skyscrapers seem to materialize overnight, said Hogan’s father, Gordon. A former missionary to Pakistan, Gordon Hogan moved here with his family in 1968 and served the church for 25 years.
Singapore “is always in a state of renewal,” Gordon Hogan said as he preached during the farewell service.
The church should be, too, he said. He encouraged Moulmein’s members to appoint elders to lead the congregation, to “develop the very best Bible school from cradle roll to seniors” and to set the ambitious goal of planting one new congregation in Singapore per year for the next five years.
He remembered the first worship services he attended in Singapore — when attendance totaled eight. 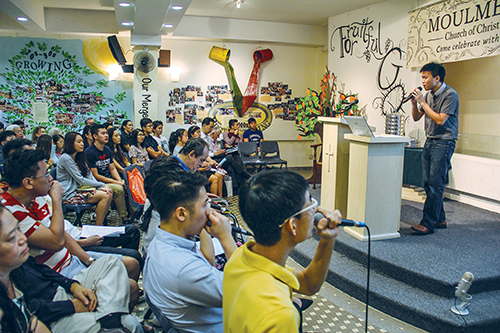 During a farewell worship service, members of the Moulmein Church of Christ and guests from across Southeast Asia sing hymns, including “Shout Hallelujah.” (PHOTO BY ERIK TRYGGESTAD)
“There were days I felt like cursing the fact that we had a building that would seat 200,” he said. A quarter-century later, preaching in an auditorium packed to the walls with souls was a dream come true.
Now, he urged his fellow believers “dream again.”

thy neighbor’s pews
“Moulmein is a mother church, always unselfish, always giving, giving, giving,” said Lau Kin Fatt, one of three Malaysian preachers who spoke during an evening of worship and stories before the farewell service. 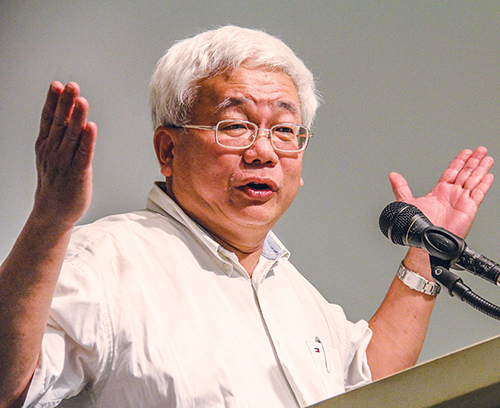 The church once housed the Four Seas Bible College, still active today, and gave from its own coffers to help plant new congregations across the island and in Malaysia. In recent years, Moulmein has launched nonprofits that benefit its community, including the Friends of the Disabled Society and Centre for Fathering.
Ong Chong Fatt, minister for a Church of Christ in Petaling Jaya, Malaysia, remembered attending gospel meetings at the building when he was a student at Four Seas in 1974. 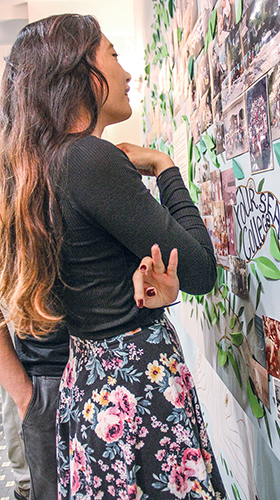 Church members and visitors peruse the walls of photos at Moulmein. (PHOTO BY ERIK TRYGGESTAD)

“Moulmein has always been the iconic building — the building where we always come together as one,” he said.
Time and time again, the church has emptied its treasury to help other congregations buy land, Ong said. Moulmein even donated 22 of its pews to the congregation where he preaches.
“We love them, and we’re still using them,” Ong said. The Moulmein church now uses interlocking, stackable chairs — but still has a couple of its old pews in the back of the auditorium. With a grin, Ong pointed to the pews and claimed them for his church as the audience laughed.
Ong Kok Bin, a minister for the Seremban Church of Christ in Malaysia, also has fond memories of Moulmein’s building.
He told the church’s members that he prays their new facility “will allow you to serve better.”
He acknowledged, however, that he was fighting the urge to “put my arms around this building and say, ‘Please don’t tear me down.’” 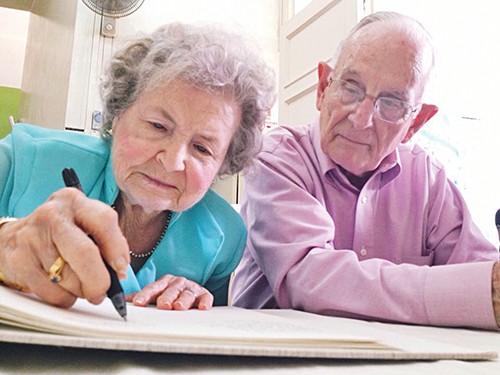 Jane and Gordon Hogan sign a memory book after Moulmein’s farewell service. (PHOTO BY FAITH MURRELL)
pass it on, pay it forward
Younger Christians don’t quite feel the same way. 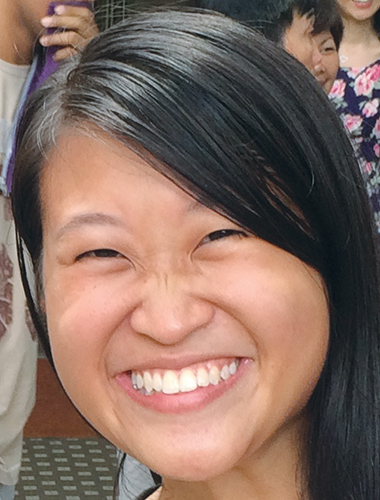 Xiang Wong
Sure, there are plenty of memories of camp-ins, Vacation Bible Schools and devotionals here, said Xiang Wong, an active member of the church’s youth ministry. But they’ve run out of space, she added, and are excited about the new opportunities a new building will provide.
The church is much more than its meeting place, said Mit Vikraman, who moved from Malaysia to Singapore four years ago for education.
The congregation — especially in recent years — has developed a heart to reach souls across Asia. Young Christians help coordinate Angkor of Faith, a yearly gathering of youths from Churches of Christ across the region who spend a week serving impoverished children in Cambodia.
When his mother, Mosharakini Arulandu, died about two years ago, Moulmein’s members were especially encouraging, Vikraman said.
Known as Mosha, she was a stalwart among the region’s Churches of Christ, and Vikraman said the outpouring of support helped him as he mourned.
Members of Moulmein “have blessed me tremendously,” he said. “And they always say, ‘Pass it on, pass it on.’
“What’s the word they use? Bless it forward? Carry it forward?
“Pay it forward! Yeah. I have a lot of paying it forward to do.”
WEBSITE: www.moulmeinchurch.com
Post by Moulmein Church of Christ.

Filed under: From The East Headlines - Secondary International News