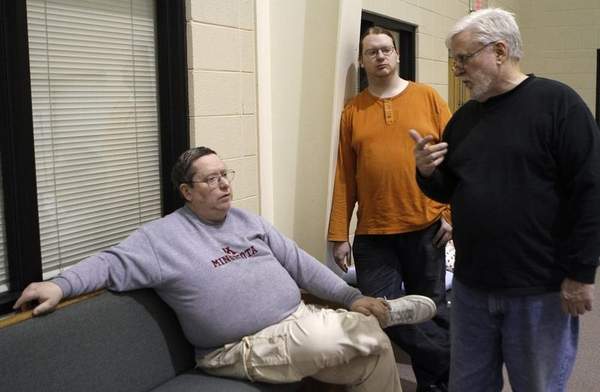 Steve Van Leur, left, and his son Marc, center, talk with Roger McCarthy, a volunteer at East Sunshine Church of Christ in Springfield, Mo. Van Leur and his son have been living in their car for the past month after being evicted from their apartment. (Photo by Nathan Papes, Springfield News-Leader, via www.news-leader.com)

The Springfield News-Leader in Missouri reports:

After checking the weather forecast, volunteers at East Sunshine Church of Christ jumped into action last week.
Tuesday, when temperatures were forecast to drop to 18, volunteers Ron Hamilton and brothers Roger and Bob McCarthy set up cots in the large gymnasium — first 26 then 35 as men arrived at the church or gathered outside Cook’s Kettle to sign up for beds.
The volunteers sent two vans to Cook’s Kettle to pick up the men, some carrying backpacks, others dragging dark green plastic trash bags filled with their belongings. When it became clear two vans wouldn’t carry all the men, a third was pressed into service so that no one had to wait outside in the cold.
At the church, the smell of fresh coffee filled the gym. The cots, provided by the American Red Cross, were set a discreet 10 feet or so apart. Each had a pillow and blanket, donated by church members.