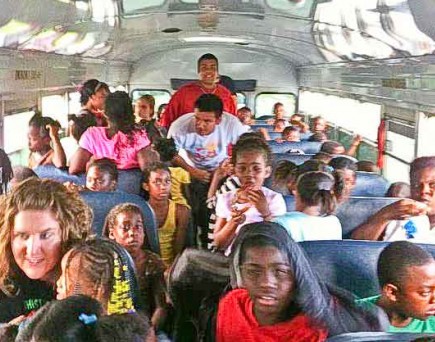 Paula Harrington
HOMESTEAD, Fla. — On a summer night, the church bus departed for the impoverished neighborhoods of this Miami suburb and nearby Florida City.
Children ran from houses and apartment complexes to find their seats — their giant smiles evidence of a life-changing ministry.
At the front of the bus, a volunteer led familiar Bible class songs such as “If You Love Jesus” and “God is a Good God.” As the wheels rolled, excited youngsters belted out the name of Jesus at deafening levels — the joyful noise echoing down the back streets of Miami-Dade County.
What a sight it must be to any passerby! I know I will never forget it.
I had the opportunity to work with the Homestead Church of Christ during their annual Vacation Bible School and was excited to see the unique work.
About two years ago, missionaries Mike and Karen Hoots and a team of students from Sunset International Bible Institute’s Adventures in Missions program (AIM) began going into the Homestead community each Saturday. They were joined by teens from the Homestead Christ of Christ youth group, which dubs itself “J4L,” meaning “Jesus for Life.”
In the community, the missionaries and students set up tents and tables and hosted weekly Vacation Bible Schools.
The neighborhood kids loved it and came in droves. Last year, the church’s VBS on Wheels ministry began inviting the area children to the congregation’s midweek service. However, the church didn’t have enough vehicles to transport all the children who wanted to attend.
Robert Porcha, a former AIM missionary from California who relocated to Homestead after his graduation, used his mission newsletter to inform Christians of the need for a bus.
When word got out that some children were unable to attend Bible classes due to lack of transportation, Christians got involved. Donations were sent, and a bus was purchased through the Taylor Bus Company in Murray, Ky. And soon, the Homestead church had its very own bus ministry.
Porcha wasn’t the only AIM graduate who decided to move to Homestead after his stint with Adventures in Missions. Three other missionaries who had worked with the Homestead church while in AIM — Casey Tamez from Stockdale, Texas, Jaz Jubenville from Charlotte, N.C., and Amberley Payne from Brady, Texas — returned to make the 35-member congregation their home as well. Maria Calderon came out of the church’s youth group. Also a graduate of AIM, she spent two years in Brazil but is back home and working as a full-time missionary.
The Homestead church had one VBS in the morning for the students of Redland Christian Academy, a private school operated by church members.
At night, a separate VBS was conducted for community kids.
It took less than an hour to fill the bus as Mike Hoots beckoned the children with a loudspeaker. He and his helpers talked with parents as the children loaded letting them know that they were also invited to attend.
Some took him up on the offer.
While I was with the Homestead church, three precious souls were added to the Kingdom. All were parents whom church members met through the bus ministry.
“We’re building the church from the children up,” Mike Hoots said. “These kids are going back into their community with hope, love and the joy that comes with knowing Christ.”
With upward of 80 children at the evening VBS services and the majority of them scarcely used to any kind of church setting, the nights were exciting, to put it mildly.
I taught the 10- and 11-year-olds and learned quickly that they were eager to know all about Jesus. Our memory verse for the week was Proverbs 3:5-6: “Trust in the Lord with all your heart and lean not on your own understanding. In all your ways, acknowledge him and he will make your paths straight.”
To witness the extreme enthusiasm that came from memorizing Scripture from children who told me stories so heartbreaking it was hard to hold it together was more beautiful than anything I had seen earlier on my drive through Palm Beach. It wasn’t surprising when a child asked if we could delay game and craft time to focus on memorizing our verses. These children are starving for the truth.
As I rode the bus that last evening and witnessed the street parties going on around us, I realized that to these children their bus was a safe haven from the crime and heartache that plagues them on a daily basis.
As we said our goodbyes and before they exited the bus, I hugged them a little tighter, knowing that our paths may never cross again this side of heaven.
I thank God for missionaries all over this world, but especially for the ones in southern Florida. I’m grateful to be part of a fellowship of believers who aren’t afraid to get involved in the lives of others or scared to take Jesus to hurting families and broken communities.
Because of these faithful missionaries’ deep devotion to others and to Christ, I’m thankful that those precious children and their families will always have hope in Homestead.
PAULA HARRINGTON worships with the Calvert City Church of Christ in Kentucky. She is a columnist with Forthright.net and the compiler of the books “A Sunday Afternoon With the Preachers’ Wives” and “A Common Bond.” She can be reached at [email protected]