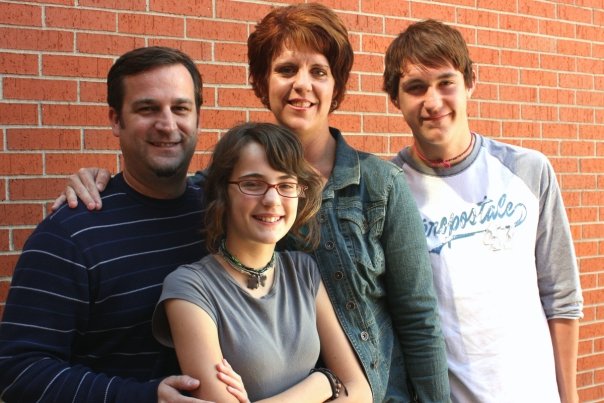 The Miller family during a 2009 visit to Oklahoma City. (Photo by Erik Tryggestad)

After another wave of violence shook Bangkok, missionaries in Thailand asked for prayers — for the Thai people, for themselves and for a mission team visiting from Texas.
“The last time I sent an e-mail update, I talked about the good path that the situation was starting to take,” Andy Miller said in an e-mail sent today. “It looked like both sides were talking again and heading down a peaceful path. Well, that path quickly deteriorated …”
The latest round of violence began right in front of New York Times reporter Thomas Fuller. The reporter was interviewing Khattiya Sawatdiphol, a renegade Thai general opposed to the current government. About 7 p.m. Thursday (7 a.m. Oklahoma time), the general was shot in the head.
“This was a shock to the situation,” Miller said, “and was followed by a few skirmishes between troops and protesters. The government has tightened security in that area, declared a state of emergency in other areas of Thailand and is preparing to crack down on the protesters. So please pray today for the situation.”
Miller, his wife, Kathryn, and their two children live in Bangkok and work with a team of Americans and Thai Christians. The group works with Churches of Christ the Bangkok area and ministers to the city’s massive population of college students. The Millers visited me here in Oklahoma last year. I mentioned their work in recent coverage of the protests.
Eight church members from Lubbock, Texas, arrived in Bangkok recently. The group is working with the Millers on a project for Let’s Start Talking, or LST, a Texas-based ministry. Volunteers with LST use the Bible to help non-native speakers improve their English skills. The LST team arrived in Bangkok two days before the shooting.
Tensions in the Asian capital have been high since early March, when protesters poured into the streets, blocking traffic and demanding that the Thai government schedule new elections. The protesters, known as the Red Shirts, oppose the government of Prime Minister Abhisit Vejjajiva, who came to power after a 2006 military coup that removed Thaksin Shinawatra from power. The New York Times offers a good explanation of the situation.
Please comment if you have more details. We’ll continue to post updates as we get them.