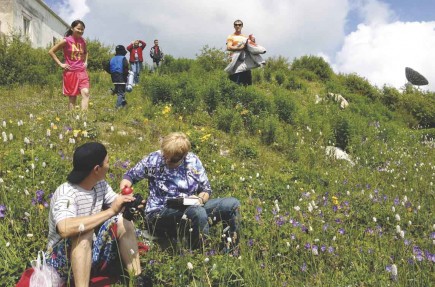 Around the World, September 2012

STAFF REPORTS
Christians camp in Kazakhstan
Minister Alexander Metso, top center, prepares for a devotional during a recent summer camp for teens in the former Soviet republic of Kazakhstan. The country of 15.7 million people is predominantly Muslim. Its largest city, Almaty, is home to a Church of Christ, established by native Christians and missionaries from the North Atlanta Church of Christ.
Metso works with the church and the Light House, a facility for teen orphans. Metso conducted devotionals during a recent summer camp for teens. Misha Shakoorov and Saken Alseitov also serve as ministers for the church.
BRAZIL

FORTALEZA — After a quarter-century of ministry with Christians in this northeastern Brazilian city, David and Babi Ingram plan to return to the U.S. in November, according to Great Cities Missions, a church-planting organization focused on the Latin world.
The congregation has its own elders and has planted additional congregations. David Ingram will serve as a minister at the couple’s sponsoring congregation, the Northside Church of Christ in San Antonio.


TEMA — A recent visit to the Vertical Center Church of Christ in this West African port city “revealed a thriving congregation of more than 1,200 members and the most well-built edifice among Churches of Christ in Ghana,” said Augustine Tawiah, president of Ghana Bible College in Kumasi.
“They are a well-organized congregation,” Tawiah said. “It was gratifying to see that the leadership used the Sunday morning class time to share their various targets they have planned for the year and beyond.” The church has an outreach plan for the country’s Eastern, Greater Accra and Volta regions.
MEXICO

MEXICO CITY — The Alborada Church of Christ, a new congregation planted in the northern suburbs of this Central American capital, has experienced 50 baptisms in its first six months, members report. Attendance was 128 at a recent Sunday service.
RWANDA

NYAMATA — Matt and Andrea Miller, along with their four children, have spent the past five months adapting to life in this East African nation.
During what the couple calls a “season of learning and serving,” Andrea Miller has volunteered as a tutor and substitute teacher at the Rafiki Orphanage School. Matt Miller teaches the Ntarama Secondary School English club. The couple is part of a Disciple Making Movement team, consisting of Rwandan and U.S. Christians.
SOUTH SUDAN

KONGOR — Churches of Christ are growing in the world’s newest nation, which celebrated its first year of independence on July 9.
The Starfish Foundation, a humanitarian nonprofit supported by Churches of Christ, is building a Christian vocational boarding school in the East African nation’s Jonglei state. The state’s governor requested the school, said Dennis Cady, who oversees the foundation.
The six tribes that comprise Jonglei state have a history of conflict, Cady said.
“The governor is right when he says, if young people from all six tribes are brought to a boarding school where they will live, eat, study and play together, they will form friendships and influence others towards unity and harmony.”
For more information, see www.thestarfishfoundation.net.
THAILAND

KHON KAEN — For the Chumpae Church of Christ, the third time was the charm.
More than 180 Christians, representing 17 congregations, attended a celebration and open house for the church, which meets in Thailand’s Chumpae District.
“We began the church there about six years ago — after trying three times,” said missionary Kim Voraritskul.
Finally, “the Lord blessed the church,” he said. “The brethren there decided to build their own building. Besides contributing financial help, brethren from different churches labored to build the church house themselves.”
A 55-year-old minister named Samran moved to Chumpae to help the church. The minister runs a home-based business selling desserts and is self-supporting, Voraritskul said.