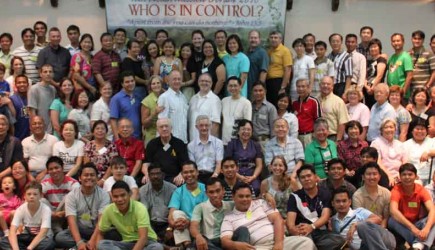 Around the World, October 2010

Erik Tryggestad
Nine nations represented at 49th Asia Mission Forum
For the first time in its history, the Asia Mission Forum was organized by non-Americans, said Gigie Carranza, a Filipino Christian and one of the coordinators.
Churches of Christ in the Philippines hosted the 49th forum on Panglao Island in the province of Bohol. More than 150 people attended, representing congregations in Singapore, Malaysia, Japan, India, New Zealand, Myanmar, Vietnam, the U.S. and the Philippines.
Guest speakers included Jay Jarboe, director for church equipping for Texas-based Missions Resource Network; Ed Poblete, a Filipino minister in Ada, Okla., who makes mission trips to his homeland; and Barrett Coffman, minister for the Southside Church of Christ in Lexington, Ky.
The 50th Asia Mission Forum is scheduled for summer 2011 in Chiang Mai, Thailand.
{{MAP}}
CANADA TSAY KEH — Norm and Jen Weir, members of the Central Valley Church of Christ in Abbotsford, British Columbia, traveled to the Rocky Mountain Trench in the northern part of the province to work in villages of the First Nations — Canada’s indigenous people. Sixteen people worshiped with the couple in the community of Tsay Keh, and nine met for a Sunday evening service in Fort Ware.
In Tsay Keh, the couple made repairs to a facility that will serve as a residence for a Bible day camp sponsored by church members.
{{MAP}}
HONDURAS TEGUCIGALPA — A mission team of 20 people built two houses, installed 12 water filters and distributed 800 packages of food, clothing, toys and Bibles in this Central American capital. In addition, 256 patients received health care services, 60 pairs of eyeglasses were distributed, and 270 meals were provided to families at a hospital.
It was the 11th annual mission trip coordinated by members of the Spring Road Church of Christ in Westerville, Ohio. Church members from as many as six congregations in five states have participated in the work.
{{MAP}}
POLAND RADOM — Twenty-five church members and friends attended the fifth annual Polish Retreat in Radom, about 65 miles south of Warsaw. “Soul training: Using spiritual disciplines to become like Jesus from the inside out” was the theme. Daniel Napier from Zagreb, Croatia, was the guest speaker. Attendees represented Churches of Christ in the Polish cities of Warsaw, Wroclaw, Gdansk and Radom.
{{MAP}}
ROMANIA VALEA STANCIULUI — An average of 86 children attended summer Bible classes at the Church of Christ in this southern Romanian city, missionary Harvey Starling reported.
Starling, of the Midway Church of Christ in Madison, Ala., works with seven churches in southern Romania. Last year 192 children attended summertime Bible classes at the seven congregations. This year the number rose to 290. The Eastland, Texas, Church of Christ provided funds for the special classes.
{{MAP}} RUSSIA MOSCOW — Church members from Moscow, St. Petersburg and Kharkov, Ukraine, attended a three-day workshop on church planting movements at a retreat center about one hour from Russia’s capital. Phil Jackson, facilitator for European church planting for Texas-based Missions Resource Network, conducted the seminar.
“The church in Moscow seems to be doing really well,” said Gary Jackson, a former worker in Russia, who attended the seminar. “There is a strong core of leaders, and they do a very good job of guiding and feeding the church.”
{{MAP}}
SLOVENIA MARIBOR — Andrej and Nina Lovse, graduates of the Zagreb Bible Institute in Croatia, work as evangelists to their native Slovenia. The couple hosted their first youth camp recently for 16 children from the Maribor area.
“Even those that openly said they don’t believe in God confessed that there is something greater here, something that they have never seen or experienced before,” Andrej Lovse said. “It just takes my breath away how strong God was working in these kids’ lives. … I am amazed — but at the same time I am honored — to be a part of a movement of God among the young people of Slovenia.”
{{MAP}}
TRINIDAD AND TOBAGO CHAGUANAS — More than 2,000 people from across the Caribbean, the U.S., Bermuda and South America gathered for Sunday worship as the 40th annual Caribbean Lectureship began.
“This was the largest gathering of Christians ever at the Caribbean Lectureship in all its 40 years,” said Francis Yorke, a minister from Jamaica.
“The Churches of Christ in Trinidad and Tobago have grown numerically and spiritually,” Yorke said, “and have really impacted the Caribbean and indeed the world.”
The next lectureship is scheduled for July 2011 on the island of St. Lucia.