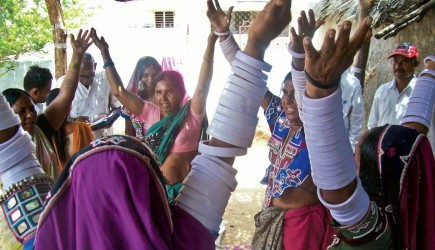 Around the World, November 2012

The jungle-like forest, in India’s Andhra Pradesh state, is famous for its caves and wildlife — including tigers. Subhan, a minister in Nandavaram, and four other preachers traveled through rugged terrain to reach the village of Lakshmanpur.
“The people of this region are very different in how they speak, dress, and eat,” Subhan said, “but many understand the Telugu language, so I was able to preach the Gospel of Christ to them. Thankfully, 17 souls came forward and were baptized into Christ. Some of our preachers will continue followup with these people to see them grow and mature as disciples of Christ.” The region is home to 11 Churches of Christ, the minister added.
BURUNDI
CHAGURA — Though many Americans are familiar with the 1994 genocide in Rwanda, fewer know that the tiny African nation of Burundi, to Rwanda’s south, also endured years of conflict between the Tutsi and Hutu ethnic groups, said missionary Fielden Allison. At least a half-million people died during the 12-year conflict.
The missionary and his wife, Janet, spent 16 days in the villages of Burundi, teaching marriage enrichment through their Africa Institute of Marriage and Family. There are few Churches of Christ in Burundi, Fielden Allison said. A pastor of a group called Friends Church invited him to preach.
“Because these people have been through so much turmoil and have seen some terrible things,” he said, “I told them that, regardless of what they were guilty of — even killing — that Christ would remove all their loads of sin when they repented and were baptized in his name.”
GUATEMALA
MIXCO — About 200 people attended the one-year anniversary of a Church of Christ in the neighborhood of San Cristobal in the municipality of Mixco, near Guatemala City.
Four graduates of the Latin American Theological Institute in Guatemala planted the congregation. The work has been slow, with four baptisms reported in the first year. The church planters have encountered Guatemalans who were baptized by missionaries before the country’s civil war. Eight attend the San Cristobal church.
“Because of this, the San Crisobal team saw a great need to begin a new work in the village called Las Pacayas,” reported Hawatthia Jones and Byron Benitez, missionaries and overseers of the institute.
NIGERIA
OBONG NTAK — On a recent Sunday, 20 students in grades seven to 10 at Obong Christian High School asked to be baptized during worship at the Campus Church of Christ.
“This is the largest conversion on a single day recorded at the campus church,” said Esang Akpanudo, the school’s principal.
PAKISTAN
LAHORE — An aging minister in this South Asian nation — where 95 percent of its 176 million inhabitants claim Islam as their faith — asks for funds so that future generations can continue the work.
The minister, Asghar Ali, “obeyed the Gospel, even though it brought long-term alienation from his physical family,” said Betty Choate, who moved to Pakistan in 1962 with her husband, J.C., to serve as missionaries.
The church Ali serves must leave its current location and seeks a permanent home.
“Simply standing firm in the faith — and being courageous enough to teach it to others — demands commitment and bravery on the part of every Christian there,” Betty Choate said. For more information, contact the West Corinth Church of Christ, P.O. Box 935, Corinth, MS 38835-0935 or call (662) 286-5739.
VANUATU
PORT VILA — Tobey and Kathy Huff returned to this island nation recently to begin their 37th year of mission work in the South Pacific.
The couple was in the U.S. raising awareness and funds for the Christian Institute of Biblical Studies, which they plan to launch in Vanuatu next year. The missionaries have secured 30 acres of land for the school, the Joplin Globe in Missouri reported.
The Mount Hope Church of Christ in Webb City, Mo., sponsors the Huffs.