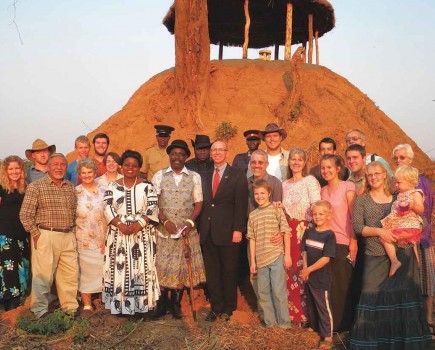 Around the World, November 2011

Erik Tryggestad
U.S. ambassador views mission team’s work in Zambia
U.S. ambassador to Zambia Mark C. Storella, toured the Mumena Christian Outreach Center, tried out a bicycle-powered water well pump and saw other sustainable development projects undertaken by a team of missionaries near the town of Solwezi in the southern African country. The team includes Brian and Sondra Davis, Rick and Karen Love, Sam and Ellie Rodriquez, Jeremy and Whitney Davis and Jason and Erin Davis. Chief Mumena said of the church members’ work, “Look what great things can happen when a people of God follow his call to serve others.”
ALBANIA SARANDA — This year’s Albanian Christian Camp was an international affair.
More than 300 campers attended, representing churches in nine Albanian cities and the nations of Montenegro, Croatia, the U.S., Greece, Germany and Luxemburg, said coordinator Sokol Haxhiu.
Alfred and Diana Zike of the Adriatic Church of Christ conducted the first week, designed for children. Bledi Valca of the Tirana Church of Christ conducted the second week for teenagers. Cimi Kafexhiu of the Durres Church of Christ directed a camp for adults during the third week.
GHANA ASOTWE — Joel and Pat Coppinger led a team of six church members on a World Bible School campaign in this West African nation. The campaigners worked with Ghanaian Christians to baptize 141 and establish a new congregation in the village of Asotwe.
“In one day, 31 were baptized in that village,” Joel Coppinger said.
GUATEMALA GUATEMALA CITY — Twenty church members from the U.S. participated in a mission trip to this Central American nation recently. The team conducted a seminar — with classes for children, teens, men and women — at the Linda Vista Church of Christ. The team also made improvements to the homes of three families in need.
THAILAND CHIANG MAI — A record-breaking 252 church members attended the 50th Asia Mission Forum. Speakers included Gordon Hogan, longtime missionary to Pakistan and Singapore; Tim Woodroof, minister for the Otter Creek Church of Christ in Brentwood, Tenn.; and Atsushi Tsuneki, minister for the Mito Church of Christ in Japan. Find audio from their talks and video interviews from the forum at asianmissionforum.com.
UKRAINE DZERZHINSK — About 150 children from a public school in this Eastern European city learned about the “superheroes” of the Bible during a weeklong camp.
Twenty-nine Christians from the U.S. sang with the children, performed puppet shows and taught Bible stories.
“Our days were full,” coordinator Bill Wharton said. “The team was also involved in service projects within the church and community,” including painting and repairing homes and visiting a nearby orphanage.
Alina, a 12-year-old who attended the camp, said, “I have learned a lot about justice, kindness, about our growth and about the superhero Jesus who is unconquerable. This was an unforgettable week. I also found a lot of new friends.”