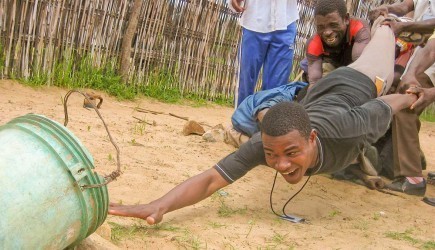 Around the world, November 2009

Reaching for unity through teamwork in southern Africa
Floristo Germindo tries to grab a rock and place it in a bucket — without touching the ground — with help from Fransisco Menhuene and other church members at a leadership training event in Montepuez, Mozambique.
“These seminars came out of an idea that my teammate Jeremy Smith had to focus specifically on a select group of leaders and integrate Bible study and ropes course-type activities,” missionary Alan Howell said.
The Makua mission team has hosted six seminars this year. “It has been exciting for us to see them work together as a group to solve problems in a safe environment — and then see them take some of those ideas and processes and implement them within the church as a whole.” For more information, see makuateam.org.
Spotlight: Italy at last!
Vicenza, Italy
{{MAP}} For nearly eight years, as they struggled to secure funding for mission work in Italy, Randall Adams and his family adopted the saying, “When we get to Italy, it will only be because God made it happen.”
“Well, we’re here now!” Adams wrote in a recent e-mail from Vicenza.
The former church planter and bug exterminator hoped to launch a pest control business in Italy as a means of making contacts and funding the work. Adams is learning Italian as he works to obtain the necessary permits.
“God answered every prayer for our safety and entry thus far,” he said. “Like Joshua after entering the Promised Land, we plan to set up stones of remembrance as soon as we locate an apartment.”
ARUBA Oranjestad — Tim Henderson, the son of longtime missionaries Parker and Donna Henderson, is working with the church on this Caribbean island, part of the Netherlands Antilles. Tim Henderson plans to transition out of the work after Ricky Copper, a minister from Trinidad, secures permits to move to Aruba.
Meanwhile, the Aruba church is sending members to Bonaire, another island in the Netherlands Antilles, to help members there construct a meeting place. Missionaries Martin and DeAnna Klamm work with the Bonaire church.
BURUNDI Bujumbura

{{MAP}}The ethnic conflict that devastated this African nation received less news coverage than the one that took place in its neighbor to the north — Rwanda.
Nonetheless, “Burundi experienced genocide similar to Rwanda’s — except that it was spread over a 14-year war,” said Sam Shewmaker, facilitator for African church planting for Missions Resource Network.
Shewmaker, who lives in Kigali, Rwanda, and Rwandan pastor Timothy Subika traveled to Burundi recently, recruiting for an evangelism workshop.
“As peace has returned, the church leaders we met were rejoicing that there is now opportunity and freedom for Christian ministries,” Shewmaker said. “Now would be a good time for a mission team to move to Burundi.” Those interested may contact [email protected]
CZECH REPUBLIC PRAGUE — About 80 Christians from five Central European nations attended an annual retreat hosted by the Prague church. Speakers included Jaro Marcin from Kosice, Slovakia; Ati Levai from Miskolc, Hungary; Honza Dadak from Brno, Czech Republic; and Joshua Beall, a missionary in Olomouc, Czech Republic.
GUATEMALA GUATEMALA CITY — More than 2,000 church members representing 300 congregations across this Central American nation gathered recently to celebrate 50 years since the first Church of Christ was planted there.
Today Guatemala is home to about 40,000 church members, according to church leader Conrado Urrutia. Dan Coker and Jerry Hill, former missionaries in Guatemala, took part in the service.
JAPAN HARUNA — Paul Herrington preached a sermon in Japanese recently — with some translation help from minister Shiro Obata.
Herrington and his wife, Stacey, moved to Haruna to begin an internship with Obata through Helpers in Missions, a ministry of the Memorial Road church in Oklahoma City. The Herringtons also receive support from their home congregation — the Northside church in Wichita, Kan. For more information, see herringtonjapan.com.
NEW ZEALAND Rotorua — About 50 women representing Churches of Christ across New Zealand gathered recently for the 30th annual Ladies’ Challenge, a time of “fellowship, Bible classes and renewal,” said Mary Nelson, a member of the Tauranga, New Zealand, church.
PARAGUAY Asuncion — Josh Blackmer, an evangelist for the Palm Beach Lakes Church of Christ in West Palm Beach, Fla., and his wife, Cara, moved to this South American nation recently to begin a five-year commitment to Paraguay Mission. Troy and Andrea Spradlin, also from West Palm Beach, will join the team in January.
The couples will continue the work of a six-member mission team in Asuncion as it reaches the end of its five-year commitment. Team members Chris and Vickie Fry plan to stay in Paraguay during the transition.
In 2004 the team helped launch the Sacramento Street Church of Christ, which now has about 80 members.
SOLOMON ISLANDS Honiara — More than 66 years after the bloody Guadalcanal campaign, which claimed more than 30,000 lives during World War II, church members are waging a campaign for souls on this South Pacific island.
“Three more precious souls have put on Christ in baptism and others are seriously considering their life in view of the Gospel,” missionary Randy English wrote in a message from Honiara, the largest city on the island. The growing church in Honiara is looking for land for a new meeting place, the missionary added.
UKRAINE KIEV — Earl Williams, an evangelist in Conroe, Texas, traveled to this Eastern European nation recently to host a weekend Bible seminar for the Vinograder Church of Christ. Thirty-one people participated, and one man was baptized, missionary Jim Noyes said.
The church hosted its annual Children’s Day Camp recently, with 55 children participating.
“Twenty-three were first-time participants,” Noyes said. “Almost every member of the congregation helped with the camp.”