Staff Reports
David and Samson Okotch stand in front of the sign language alphabet at the Kuja school for the deaf in Kenya. The boys were among 80 people with hearing impairment who attended the National Christian Deaf Workshop in the town of Sotik, Kenya, recently, coordinator Simeon Ongiri Atanga said. The meeting was the result of long-term outreach to Sotik’s deaf community, Atanga said. Hearing-impaired people from other nearby villages had been meeting at the church-supported Siriat Bible School for some time, but only a few from Sotik had attended the meetings. But 14 people from Sotik came to the conference, Atanga said. Three were baptized. The church members joy was followed by sadness. David and Samson’s faither, Stephen Okotch, 38, died recently, leaving behind a wife and three other children. The family attendes the Mogesa church. Atanga asked for prayers for the family.
BARBADOS
BRIDGETOWN
Missionary Jimmy Bracken recently hosted a group of young church members from St. Vincent for a three-week camp and seminar. “These young men were taught fundamental principles (of) serving in the Lord’s church, including stewardship, serving and leadership,” said church member Mark Selman.
Bracken and Selman host radio programs through World Radio Gospel Broadcasts.
BRAZIL
FORTALEZA
About 750 adults and 150 children from across the northeastern Brazilian state of Cerea met at the downtown church facility for the fourth annual Family Worship service, said missionary David Ingram Jr. Randy Short, missionary in Recife, Brazil, “challenged Christians to give up their lives to join Jesus on the road to Jerusalem,” Ingram said.
The event marked the 25th anniversary of the arrival of the church-planting team sent by Texas-based Continent of Great Cities in 1981, Ingram said.
ECUADOR
QUITO
Eighty people attended the inaugural service of the Los Chillos church recently, said Pat Graves, a member of the Southwest church in Pueblo, Colo.
The new congregation, in a suburb southwest of Quito, is an outreach of the Quito School of Biblical Studies and the church in Portoviejo. The Southwest church oversees the work of Kent Marcum, director of the school, which has 35 students from six nations in Latin America, Graves said.
LATVIA
VENTSPILS
Church members from two congregations in Latvia played “Christian basketball” — where each member of the team must handle the ball before the team can shoot a basket — as part of a recent retreat at a camp on the Baltic Sea, said missionary Victor Barviks. Church members recently translated the devotional songs “Soon And Very Soon,” “Lord I Lift Your Name On High” and “Father, I Adore You” into Latvian, Barviks said.
MADAGASCAR
ANTANANARIVO
More rice, fruit and vegetables, soap and blankets. Those were topics of discussion among the staff of Betikara (“House of Lambs”) recently after the children’s home added eight new tenants, from ages 5 to 12. Missionaries John and Esther Ratovohery and Barry and Stacy Rosie assist in the work and are seeking sponsors for the children. The church in Indiana, Pa., collects funds for Betikara.
POLAND
LWOWEK SLASKI
Church members from five countries attended the fourth annual Central European Retreat, organized by the church in Prague, Czech Republic, said minister Matus Dedina.
Lecturers included Lynn Camp of Eastern European Mission in Vienna, Austria; Brano Kuvik of the church in Bratislava, Slovakia; and Dedina and Tomas Mach from the Prague church.
The retreat has grown “from 20 people to 50-plus in four years and is a blessing to brethren in Central Europe,” Dedina said. The Cabot, Ark., church supports the minister and his wife, Melissa.

ROMANIA
SIBIU
Lee Skelton made a suvey trip to Romania in preparation for a 10-year commitment to work in the city of Sibiu.
Skelton set up Bible studies and preached for the small congregation in Sibiu. He also cooked for a Sunday fellowship meal, preparing a dish unfamiliar to many Romanians — broccoli.
Skelton and his family plan to move to Romania in May 2007. The Ovilla, Texas, church oversees the work.
SWAZILAND
MANZINI
Jim Marnach visited the Manzini Bible School recently to sow seeds — literally.
The retired hazelnut farmer and his wife, Jenene, traveled from Oregon to help church members get the most from their macadamia farm. The school operates the Tree of Life ministry to help support its students as they study. Jim Marnach showed the workers how to put down lime and prune the macadamia trees. Jenene Marnach did landscaping for the campus.The school appointed Sydney Mhango director of physical operations for the school and the Tree of Life.

TRINIDAD AND TOBAGO
PORT OF SPAIN
Church members stayed busy in recent months preparing for a Vacation Bible School, two workshops, a gospel meeting and an island-wide ladies fellowship, said minister Mahase Bissoondath.
“There has been a total of 60 visitors attending our services and Bible study on Sunday mornings who have not yet obeyed the gospel,” Bissoondath said, adding that the church was focusing its evangelistic efforts on these visitors and their friends and families.
VIETNAM
DANANG
At least 15 people in central Vietnam died recently as Typhoon Xangsane struck the country’s coastline, missionary Tom Tune said. Tune has worked for several years in Ho Chi Minh City, overseeing construction of a medical mission boat for neighboring Cambodia.
“Whole villages were wiped clean, nothing left standing,” Tune said, adding that he’s collecting funds to help those affected by the storm.
“Needless to say, I love these people,” he said.
Nov. 1, 2006 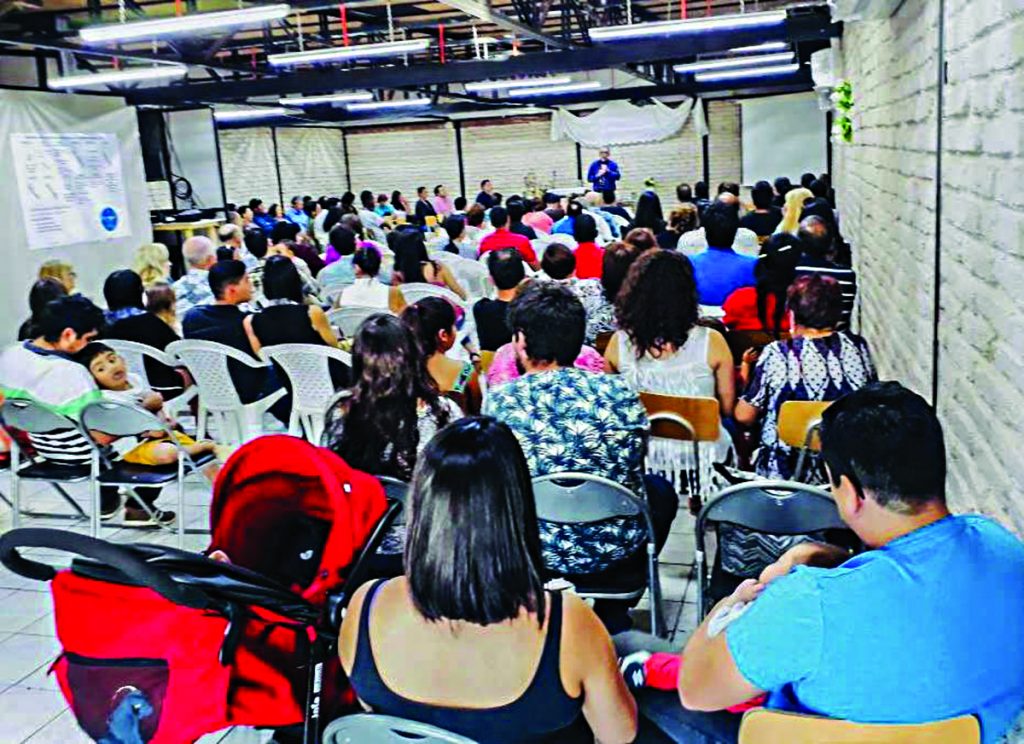 SANTIAGO, Chile — Churches of Christ can easily fall into…