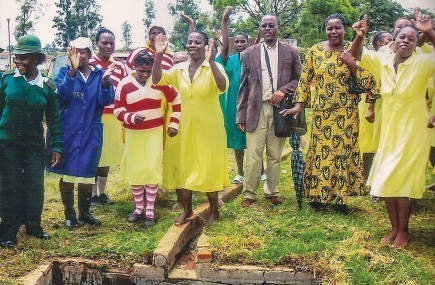 STAFF REPORTS
Inmates in Zimbabwe celebrate new life in Christ
More than 100 inmates were immersed at a women’s prison in Zimbabwe recently after studying Scripture through the World Bible School correspondence program. Stanley Shereni, a minister for the Avondale Church of Christ in Harare, center, watched the women surrender their lives to Christ. One “was regarded as a hardcore criminal … doing 15 years for robbery,” Shereni said. Church members teach Bible and provide toiletries, clothing and food for about 450 inmates at six Zimbabwean prisons. In Zimbabwe’s struggling economy, “many are now committing crimes and will end up incarcerated,” Shereni said. “Pregnant ladies, mothers with little babies, old and young are in our prisons. What is painful about this situation is the issue of small children who have to endure the prison’s pain while their mothers are serving jail terms.”
CUBA
MATANZAS — More than 250 ministers from across the island of Cuba gathered for the 13th annual Church of Christ National Preachers Conference recently. The Mayfair Church of Christ in Huntsville, Ala., underwrites the cost of the event each year. Juan Antonio Monroy from Madrid, Spain, led a five-man team from Abilene, Texas-based Herald of Truth at the conference.
MADAGASCAR
ANTANANARIVO — A team of 52 Christian healthcare workers and evangelists traveled to this island, off the east coast of Africa. The workers treated more than 1,000 patients and filled more than 4,000 prescriptions. The team included church members from France, Mauritius, Switzerland, Italy, the U.S., Congo, Canada and Cambodia, said Bill McDonough, international director of Partners In Progress, a church-supported ministry.
In addition, two doctors came from a congregation in Bremen, Germany, that McDonough and his co-workers helped plant 45 years ago, he said.
PAKISTAN
LAHORE — Church members scattered across this predominantly Muslim country asked for prayers after a wave of anti-Christian violence.
Muslims who accused the Christians of blasphemy torched dozens of houses in Lahore, the BBC reported. Police arrested more than 150 people in connection with the attacks.
Members of a Church of Christ in Lahore visited the site of one of the attacks and gave food to people in need.
“Most of them were weeping,” the church members wrote in a blog post. “We prayed with some of them and strengthened their faith. They have to survive in muddy streets … because they all are daily wage workers and very poor. … The condition is so miserable that we are unable to describe it completely.”
Read the post at www.cocmpk.org.
SIERRA LEONE
KENEMA — Esang Akpanudo traveled across five countries in West Africa, including war-torn Mali, to speak at the first youth forum among Churches of Christ in Sierra Leone.

Akpanudo, principal of Obong Christian High School in Nigeria, arrived in the capital, Freetown, “battered, exhausted but thankful to be alive,” he said. He spoke to about 75 youths at the forum, hosted by a Church of Christ in the eastern city of Kenema.
“There was door-to-door evangelism, with young people preaching the Gospel to the local community,” Akpanudo said. “Though the majority of the population is Muslim, they are quite receptive.”
TANZANIA
NGARESH JUU — “It’s kind of like malaria. It get in your blood, and it’s hard to get it out.”
That’s how Nancy Smelser describes medical mission work in a short film about the Tanzania Christian Clinic, in a village near Mount Kilimanjaro, where she and her husband, Dr. Danny Smelser, serve as medical missionaries.
See the video at www.tanzaniacc.org.