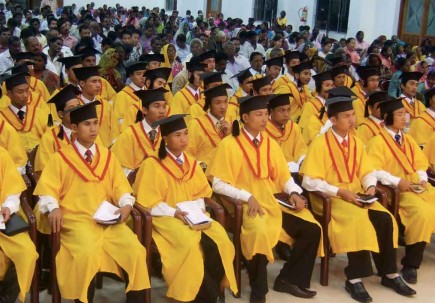 Staff reports
Graduates from across India prepare for ministry
In Chennai, India, graduates of the World Bible College listened to prayers and speeches during a ceremony honoring their accomplishments. The graduation was part of an annual preachers’ meeting that drew more than 1,000 church members from across India, said minister Paul Renganathan.
Forty-three men graduated from the college’s ministry training program.
AUSTRALIA BRISBANE — Church members did some “bush dancing” as part of their annual Camp Gidawarra in Australia’s Queensland province.
Alan Parr, a member of the Wynnum Church of Christ, described bush dancing as something akin to line dancing in the U.S. It’s a common camp activity, he added.
About 100 to 120 people attended the camp, which featured speaker Josh Patrick, minister for the Fourth Avenue Church of Christ in Franklin, Tenn.
CHINA BEIJING — Twenty-six Christian women attended a recent “all-church sisters’ retreat,” hosted by members of the Jinsong congregation.
The weekend of fellowship and encouragement included a special send-off for Danita Jackson, a church member who plans to return to the U.S. with her husband, Gary, this year.
GUATEMALA GUATEMALA CITY — Missionaries Hawatthia Jones and Byron E. Benitez request prayers for Christians in this Central American nation.
In recent weeks, the members of congregations they serve have experienced deaths due to cancer, a traffic accident and suicide.
“As you can imagine, we are weary emotionally and physically,” the missionaries said in a recent newsletter. “We are perplexed by many things that happen in this life. However, it is during these times — when we do not have all the answers — that we continue to trust in the God who does.”
SLOVENIA MARIBOR — After training in Croatia, two native Christians returned to this Central European nation to launch a ministry aimed at young people. Now their work with youths — through Bible camps and outreach efforts — has resulted in a new church.
Andrej and Nina Lovse traveled to Zagreb, Croatia, recently to give an update on their work at the Biblijski Institut, the church-supported school where they trained. Other leaders of the church-planting effort also visited the institute.
“We were blessed to see how they do their work with persistence, discipline, passion and faithfulness,” the institute’s administrators said in a recent newsletter.
ZAMBIA CHIPATA — An effort to reach lost souls in the eastern swath of this African nation has resulted in more than 1,600 baptisms and 100 church plants in the past five years, said Larry Taylor, an elder of the Baker Heights Church of Christ in Abilene, Texas.
The mission program, called East Reach, includes the Chipata Bible College, which now has 24 ministry students in a two-year program.
Zambian minister Wellington Mwanza oversees the work, which is funded by the Baker Heights church.