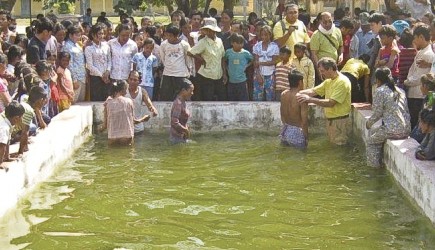 Erik Tryggestad
Cambodia medical mission treats thousands, baptizes 93
A mission team to the Southeast Asian nation of Cambodia baptized 93 people after a worship service. The team, which traveled to Cambodia on a medical mission trip, included 72 workers from Cambodia, the U.S., the Philippines, New Zealand and Vietnam.
The surgeons, doctors, nurses, optometrists, dentists and assistants treated 14,714 patients.
The Walnut Hill Church of Christ in Dallas sponsors the work, coordinated by Sokom Hun, a church member who grew up in Svay Rieng. For more information, see www.whchurchofchrist.org.
AUSTRALIA BRISBANE — Members of The Point Church in Brisbane helped neighbors in their state, Queensland, recover from devastating floods. The members removed mud and foul-smelling water from flooded homes. The grateful owners served them tea.
“It was during this casual time that we were asked about our church,” Peter Searson, a church elder, told InterSections, an Australian church publication. “It was a great opportunity to show our concern for people in the community by getting in and offering a helping hand.”
CANADA BURNABY — The South Burnaby Church of Christ, near Vancouver, British Columbia, reaches out to its international community. Members Richard Park and Bong Soo Rim conduct Bible studies with Korean immigrants and report four recent baptisms. The church offers worship services in English, Korean and Swahili, an African language.
MONGOLIA ULAN BATOR — William Crossman, who recently retired from prison ministry in Leavenworth, Kan., will travel to Mongolia’s capital in June for a five-month trip.
Crossman plans to teach contacts reached through the World Bible School and World English Institute ministries in this Asian nation, where no known Churches of Christ exist.
The Leavenworth Church of Christ sponsors the work and seeks additional supporters. For more information, see lcofc.org.
NEPAL SYBRU BENSI — Michael Brooks traveled to this Himalayan town to conduct a seminar for leaders of Churches of Christ in the area. Brooks, missions minister for the Highland Park Church of Christ in Muscle Shoals, Ala., has visited the town seven times since 1994.
During the trip, Brooks spoke with Linjing Tamang, the leader of a small church in the village of Dal Phedi. Brooks showed him a photo of a girl sifting grain he had taken in 1994. Tamang told Brooks the photo was of his oldest daughter, who is now married with three children of her own and is a faithful member of the church.
“Repeated visits to the same location continue a great biblical tradition,” Brooks said.
SERBIA BELGRADE — The small Church of Christ in this European capital, part of the former Yugoslavia, has endured NATO bombings and internal strife.
“It has been a long time coming, but the church seems to finally be settling down into a state of peace and stability,” said Gary Jackson, who visited Belgrade recently with his wife, Danita. The couple served as missionaries in Yugoslavia from 1983 to 1993.
In the past, the church struggled to find its identity among the small evangelical community in Serbia, which often is hostile to non-Orthodox believers, Gary Jackson said.
Now, Serbians are taking note of how the church differs from other evangelical groups, he said. They also realize “that the church is truly based on the Word and love for each other, and not ‘ruled’ by a powerful, central organization or person.”
SOUTH KOREA SEOUL — With mixed emotions, Christians in Seoul said goodbye to Paul Whitehead, a longtime worker among churches in this Asian nation.
Whitehead quit his job teaching English at a Korean university to work full time as an evangelist with rural congregations. To prepare for the ministry, he has returned to the U.S. to study at Freed-Hardeman University in Tennessee.
“Please be praying for him,” said Malcolm Parsley, a missionary in Seoul. “We will truly miss him, for he is a true servant of the Father.”
ZAMBIA KALOMO — Christian youths in this southern African nation spend Saturday afternoons washing dishes, fetching water, collecting firewood, sweeping and helping people in their community with gardening.
The Tumango Church of Christ Youths Alliance performs the acts of service “to motivate people to establish an eternal relationship with God,” said Jean Kadonga, a youth involved with the group.
Since the youth group launched in early 2010, “many people who had stopped worshiping have come back to the church,” Kondonga said. “This is because of what they have seen us doing.”