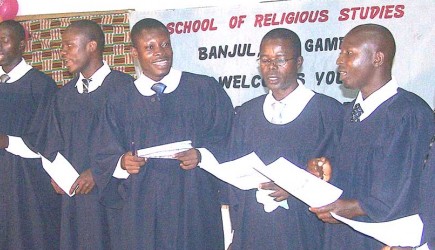 Erik Tryggestad
Graduation day in Gambia: Eight students earn degrees
The tiny West African country of Gambia has a population of 1.7 million people, and about 90 percent of them claim Islam as their faith. Missionary Isaac Daye has helped plant Churches of Christ in Gambia and also does mission work in Sierra Leone. The School of Religious Studies in the capital, Banjul, recently graduated eight students. Counting the latest graduates, the school has trained 90 Gambians to minister to their people, Daye said.
{{MAP}}
BAHAMAS NASSAU — David and Dinah Caskey, missionaries to the Bahamas, attended a leadership workshop at the Central Church of Christ in Nassau recently.
“We had a series of special services and meetings with groups as we look to the future and the appointment of elders and deacons,” David Caskey said.
The missionary praised the Central church’s minister, Andrew Major, who hosts a radio program and oversees an after-school program for children in Nassau.
Major also makes monthly trips to Cat Island in the Bahamas to work with a church in Smith’s Bay.
{{MAP}}
BRAZIL RECIFE — Missionary Aureni Pruitt asked for prayers for Rebecca, a 23-year-old who was baptized a few months ago at the Recife church. Rebecca began studying the Bible recently with Pruitt, who serves in Recife with her husband, Mike.
“We talk about the difficulties she has at home, being the only Christian there (and) friends that don’t accept the changes she is going through,” Pruitt said.
The missionary also asked for prayers for Ceica, 21, another Brazilian who recently became the only baptized believer in her family.
“Her family is from the traditional religion here and is opposed to her decision of being immersed and added to the church,” Pruitt said. “Even though she has been trying to be obedient to her parents … there is one decision she couldn’t give up.”
{{MAP}}
CROATIA ZAPRESIC — The Longmont, Colo., Church of Christ donated $500 recently for outreach at Laduc Children’s Home in this central European country.
“With this money, we were able to furnish the home with a new television, … house shoes, outdoor shoes and winter hats,” minister Ivan Tesic said.
Church member Connie Mauney sent Tesic boxes of sweaters donated by churches in the Brentwood, Tenn., area.
“We donated them to needy people in our community, and they were much appreciated due to our colder-than-usual winter,” Tesic said. For more information, see www.zapchurchofchrist.org.
{{MAP}}
GHANA ACCRA — Church members in this West African nation recently received a shipment of 638 boxes of gospel tracts, courtesy of Arlington, Texas-based Mission Printing.
“Several distribution exercises have already taken place in order to get the tracts into the hands of visitors to our services at Nsawam Road Church of Christ and those we come in contact with on the street, market places, on the bus, hospitals, schools, etc.,” missionary Willie Gley said.
{{MAP}}
ITALY PADOVA — “Competing in the Church” was the title of a lesson presented at a recent lectureship hosted by the Padova church.
Lewis Short, a missionary in Milan, Italy, was the guest speaker.
“The lecture was very positive despite how the title may sound,” Padova missionary Jeremy Korodaj said. “Using various ‘one another’ passages in the New Testament, Lewis encouraged every Christian who attended to compete with each other in the sense of trying to outdo each other in biblical ways (including) love, encouragement.”
{{MAP}}
SUDAN OPARI — Samuel Akeri, a Sudanese Christian living in Nashville, Tenn., returned to his home village of Opari in southern Sudan about a year ago to establish a church there.
When members of the Sudan Project, a mission outreach of the Mount Juliet, Tenn., Church of Christ, visited the village recently, they found it thriving.
The church had 99 people in attendance for Sunday worship — 54 adults and 45 children. For more information, see www.sudan-project.org.
{{MAP}}
UNITED KINGDOM CUMBERNAULD — Church members in Cumbernauld hosted their first Men’s Day recently, evangelist Graham McDonald said. The theme was “The Church: Mission, Vision and Passion — Most Valuable Peace.” Thirty-nine men from across Scotland attended.