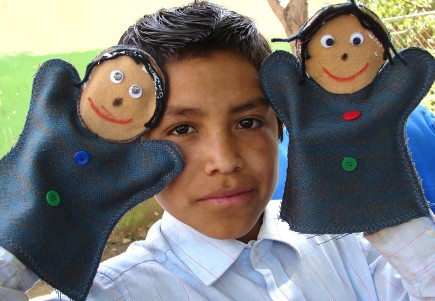 staff reports
Puppet pals in a Mexican village
A boy named Oscar holds up “Dorcas” puppets he made at a Vacation Bible School in the mountain village of La Union, Mexico. A group of more than 200 students and families sponsored by the Edmond, Okla., church conducts spring break mission trips to the Mexican state of Taumaulipas each year. The trip participants, many of them students from Oklahoma Christian University, sleep in tents for a week. They deliver care packages to hundreds of residents, work on painting and construction projects and conduct Vacation Bible Schools in Aquiles and surrounding villages.
Building rock-solid character
MONTELLANO, Guatemala — When Marie Agee saw 125 children headed toward Clinica Ezell with rocks in their hands, she was more than a bit apprehensive.
The rocks were part of a character class at the clinic, conducted by members of the Campus View church in Athens, Ga.
Twenty-seven members of the congregation traveled to the Central American nation on a recent mission trip with Searcy, Ark.-based Health Talents International. Some members assisted with eye surgeries while others conducted the class, attended by students from a school across the street from the clinic.
The students rotated through five stations and learned biblical lessons about truth, integrity and character, said Agee, Health Talents’ director of recruiting and logistics. The students decorated the rocks and made commitments to be people of character. Church members Lori Prince and Todd Goen engraved each child’s name onto his or her rock. The children used the stones to build a monument on Clinica Ezell’s grounds.
And not a single rock was thrown, Agee said, adding that the class was “a wonderful door-opener to the community around the clinic.”
CAMBODIA
PHNOM PENH — More than 300 women from churches in central Cambodia came by truck, bicycle and ox cart to attend a fellowship gathering in conjunction with International Women’s Day.
Missionaries Marie-Claire McDonough, Rhonda Doland and Rosemary Burcham organized the event and spoke on “Being Strong and Courageous in a Hostile World.”
CUBA
HAVANA — About 400 men from across Cuba met for three days of training, Bible study and fellowship at the ninth National Preachers Conference. The Mayfair church in Huntsville, Ala., sponsors the annual event. Participants included Juan Monroy, Steve Ridgell and Tim Archer, all staff for Abilene, Texas-based Herald of Truth Ministries. The three men also traveled to the province of Matanzas, north of Havana, to visit some of the 14 house churches planted there in the past two years, said Herald of Truth President Bill Brant.
INDIA
SATHUPALLI — “Why Scriptures Only?” was the theme of the annual lectureship at the Basic Bible School in Sathupalli, minister Chorlian K. Samson said. Ministers from across the region spoke, and two attendees were baptized during the lectureship, Samson said.
ISRAEL
TEL AVIV — Despite ongoing tension in the Middle East, thousands of African refugees are streaming into Israel to escape wars and violence in their homelands, said Hannah Kovner of the Jerusalem-based Netivyah ministry.
Members of Netivyah, a group of Messianic Jews that receives support from Churches of Christ, delivered rice, sugar, noodles, oil and clothing to the refugees. The group met hundreds of refugees from Eritrea in north Africa.
The Eritreans are “living in deplorable conditions in a Tel Aviv bomb shelter,” said Netivyah minister Joseph Shulam.
Netivyah members plan to continue helping to the group. “We have even found an Israeli brother who speaks Tigrinya (an Eritrean language) to tell them who we are and in whose wonderful name we are assisting them,” Shulam said.
KOSOVO
PRIZREN — Church members in Europe request prayers for the people of this territory in the former Yugoslavia.
The region has a population of about 2 million, most of whom are ethnic Albanians. Kosovo declared independence from Serbia recently, and the announcement sparked protests and riots.
A church of five families meets in Prizren, member Rifat Gashi told The Christian Chronicle. “We do have Sunday school, sermons and Bible studies on Wednesdays,” he said.
Alfred Zike, a minister in Durres, Albania, asked for prayers of safety for all people in the region. “Let’s all also pray that the Lord’s freedom (and) salvation from sin will be proclaimed in Kosovo, boldly and widely,” Zike said.
PALAU
KOROR — A small congregation on this Pacific island has a brand new building — but no land on which to place it.
The 15-member Koror church acquired a prefabricated building and had leased a piece of land for it, but the land proved to be unsuitable, said Robert Martin, a missionary who works with churches across the Pacific islands. Missionary Joey Treat and Palau church members are looking for another property, Martin said.
Meanwhile, the congregation meets on the porch of a member’s home while its building sits in a shipping container.
During a recent visit to Palau, Martin witnessed three baptisms. The missionary asked for prayers for the church, which he described as “a loving, caring, inviting and reaching-out group.”
SERBIA
BELGRADE — Gary and Danita Jackson visited the remains of a fortress dating back to medieval times during a recent trip to this Central European nation. The Jacksons worked in Belgrade, then part of Yugoslavia, in the early 1980s and helped plant churches there until 1993. Gary Jackson preached for a group of about 30 church members during the visit.
Because of its location, Belgrade residents have witnessed many wars, Gary Jackson said. “It is our hope that the presence of the body of believers here will bring peace to the people of Serbia and penetrate the most difficult of fortresses — the hearts of the sons of Adam,” he added.
SOUTH AFRICA
CAPE TOWN — Members of the Mitchell’s Plain church have practiced “open-air preaching,” door knocking and distribution of religious tracts in recent months, minister Mervyn Pasqualle said.
The congregation of 250 members has experienced 11 baptisms since the start of the year, Pasqualle said.
Church members also are reaching out to Rawsonville, a grape-farming community about 90 minutes from Cape Town. Three people were baptized there recently, the minister said.