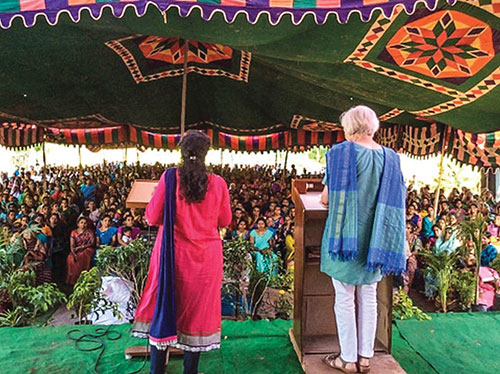 Staff Reports
FRANCE
LYON — Leaders of French-speaking Churches of Christ gathered for a retreat about an hour north of this city in eastern France. The Marseilles Church of Christ conducted the program, and the Lyon Church of Christ arranged housing.

“We focused on the upcoming generation of leaders and how we older ones need to cherish teamwork with the younger ones,” said Arlin Hendrix, minister in Lyon. Young church leaders “represented half the attendance, and they participated wholeheartedly in the discussions. It was reassuring to know that the church will be in good hands and remain viable in the years to come.”
KENYA
NAIROBI — The Institute of Practical Christian Ministry launched a new term with 20 rural preachers and leaders of Churches of Christ across Kenya, missionary Charlotte Hackett said. The Church of Christ at Eastleigh hosts the program.

“Every preaching student represents scores of Christians and several congregations,” Hackett said. “They have been sent to study Bible and Christian ministry … in the expectation that they will return to their home congregations to strengthen the church in their locality.” 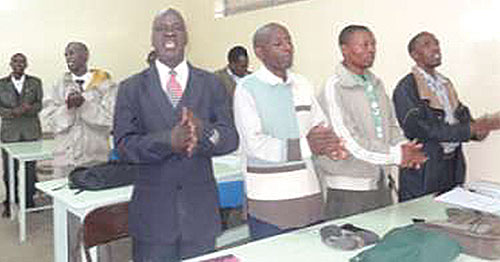 Students participate in a devotional at the Institute of Practical Christian Ministry. (PHOTO PROVIDED) LITHUANIA
VILNIUS — People in this small Baltic nation are proud that they were the first Soviet republic to break away in 1990 — and proud of the basketball players their nation produces, The Christian Science Monitor reports.

But Lithuania also has the unhappy distinction of the fourth-highest suicide rate in the world and the highest in Europe. Some researchers blame the rapid transition to the post-Soviet world or social taboos about suicide.

Rimas Rusakevicius, youth minister for the Vilnius Church of Christ in Lithuania’s capital, spends time talking with the church’s young people about God’s abounding love and the reality of suicide.

“We need to talk about this to save others’ lives,” he said. The youth minister also spent time recently answering his students’ questions about God and evil spirits.

“I enjoy it when I see kids raising questions,” he said. “It shows me that they’re really interested in the Bible. They really do care about Christianity.”
PHILIPPINES
SOGOD — About 80 young believers attended a recent Youth Encounter in this town in the Filipino province of Southern Leyte, missionary Michael Stock said.

“It was a time of renewal, growth and edification,” Stock said. During that activity, one young lady accepted Christ in baptism.

The Roanoke Church of Christ in Alabama sponsors the work of Stock and his wife, Deborah.
TOGO
KPALIME — About 250 Christians representing 20 churches gathered at a retreat site outside this West African town for the Kloto region’s third annual Bible Camp. Participants studied the theme “The Christian Family.”