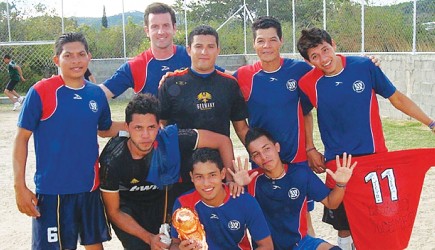 STAFF REPORTS
HONDURAS
TEGUCIGALPA —Teams from the Mateo Church of Christ celebrate their victories during a recent “futbol,” or soccer, tournament in the Central American nation of Honduras.
Youths from churches across the city participated in the tournament, which inaugurated a new “cancha,” or walled soccer field, built by Honduran church members and missionaries Bart and Melissa Dodson.
The men’s and women’s teams from the Mateo church, buoyed by their home court advantage, won their respective tournaments. Melissa Dodson’s brother and sister-in-law provided funds for the tournament.
ANGOLA KUITO — Refugees from this southern African nation, who fled to neighboring Zambia during Angola’s 27-year civil war, have returned to their homeland and are planting churches.
Danny and Katie Reese, part of a mission team in the city of Huambo, visited a new congregation near Kuito, in central Angola. Cornelius Ngolane, an Angolan converted by Zambian Christians, and other Angolan believers planted the church to serve Kunje, a community of former refugees.
“A simple message from Scripture about following the Bible only is exactly what they want to hear,” Danny Reese said. The new congregation “sent us off with a beautiful time of singing, a foot-stomping parade out to the car and bananas,” his wife added.
BOLIVIA LA PAZ — Three families — Luis and Damira Garcia, Julie and Ricky Arce and Brad and Katie Brooks — departed for this South American capital recently to serve as a church-planting team. The team is the first sent to Bolivia by Great Cities Missions, a church-supported ministry that serves missionary teams in cities of the Portuguese- and Spanish-speaking nations of Latin America.
Ron and Georgia Freitas, former missionaries to Brazil and trainers for Great Cities, accompanied the families and asked for prayers as they settle into their new home.
For more information, see bolivia.brooksmissions.com.

GHANA ATEIKU — In the past year, the Rural Evangelism Development Project has established seven new congregations and strengthened 24 churches in this West African nation, said Lawrence Oduro, who oversees the ministry, an outreach of the Ateiku Church of Christ.
Recently, workers with the project met with members of the missions committee of the Greenville Avenue Church of Christ in Richardson, Texas.
“Our brethren from Greenville … offered very helpful ideas that the project is determined to apply,” Oduro said.
GUYANA LETHEM — “The Lord’s church in every village and a Bible in every hut” is the motto of Amerindian Missions.
Jerry O. Davidson intends to fulfill that promise.
The missionary recently ordered 10,000 Bibles and 500 large-print Bibles for the indigenous people he serves in the interior of this South American nation. Davidson reports 82 baptisms and 55 people restored to their Christian faith in the past year in the villages he has visited, including Lethem. The Summerdale Church of Christ in Alabama supports the work.

MEXICO
QUERETARO
— Christians in Mexico and the U.S. are mourning the death of Miguel Arroyo, a minister and director of a school of preaching in this city in central Mexico. Arroyo, who helped establish about 10 Churches of Christ in 30 years of ministry, died in a car accident in the state of Zacatecas. He was 58.
Arroyo also did mission work in India with missionary Jim Waldron and was associated with the Crieve Hall Church of Christ in Nashville, Tenn.
TANZANIA MBEYA — More than 180 youths from across this East African nation attended a seminar hosted by the Chimala Mission Church of Christ. Missionary Chad Wagner spoke on marriage and participated in a question-and-answer panel. Six of the youths were baptized.
See Wagner’s blog at www.wagnertz.webs.com.