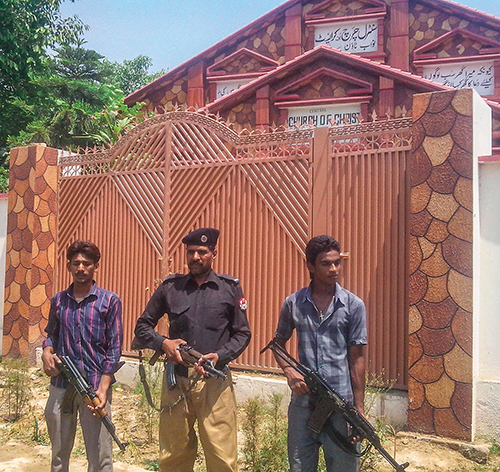 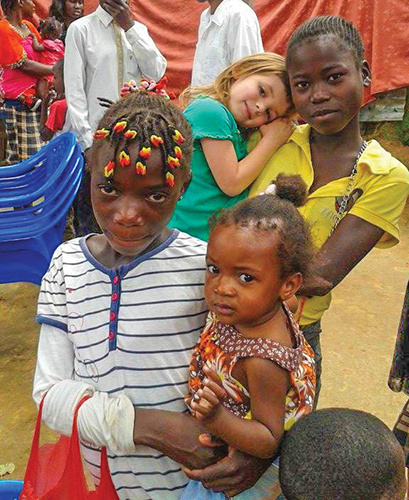 Members of the São Luís church celebrate with missionaries. (PHOTO BY KATIE REESE)But not goodbye.

“We will visit and encourage and mentor the leaders,” Danny Reese said of the São Luís church, “but our presence on a weekly basis is no longer needed.”

The mission team started working with the church in 2012.

“It had a difficult start, with some unhealthy leadership,” Reese said. “Our team tried for months to find mature Christians … but eventually began working with four youths, mentoring them into leaders.” See www.angolateam.org.
BRAZIL
RIO DE JANEIRO — The small auditorium of a Church of Christ in this bustling South American city overflowed with visitors on a recent “Friends Day” Sunday, missionary Larry Zinck said.

“As a result, we see even more vividly the need to complete our new worship center,” Zinck said, “so that we will have room for all the new people the Lord is sending our way.”

More than 150 Christian women also gathered recently for a citywide day of praise, prayer and fellowship, the missionary added.
CHAD
DONO MANGA — Evangelists in this central African nation rejoiced as they dedicated a new medical dispensary and opened a container from the U.S. bearing a water well drilling machine.

Hope Springs International, a nonprofit based in Tennessee, shipped the container and supports the work in Dona Manga, which includes a school for about 650 children, an orphanage, a health center that treats more than 600 patients per month and a church building. See www.hopespringsint.com.
PAPUA NEW GUINEA
PORT MORESBY — Steve Collins, a member of the Warwick Church of Christ in Australia’s Queensland state, will lead a small mission team to this South Pacific nation in late June. The team and local Christians will travel into the Waria Valley to minister to Christians there.

Australian missionaries Tom and Rens Bunt helped plant churches in the valley in the 1970s, Collins said.
SWITZERLAND
GENEVA — After a year of preparation, the Geneva Interactive Bible School is online. The elders of the Geneva Church of Christ see the school as a way to develop and train French-speaking Christians — where they live and work — for ministry.

Justin Smith, a 2012 graduate of Harding University in Searcy, Ark., who grew up in Lausanne, Switzerland, helped develop the online school.

The program launched with a six-hour seminar on Christian apologetics, attended by 52 students from five churches and taught by Max Dauner, a missionary in Marseille, France. See www.etude-biblique.com.