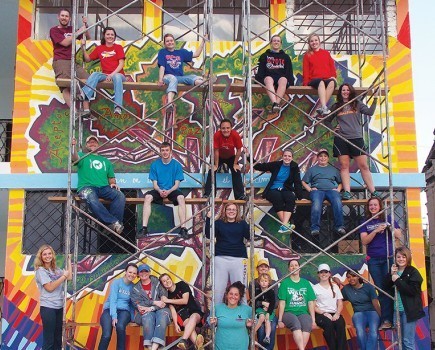 STAFF REPORTS
BURUNDI
BUJUMBURA — Christians in this tiny East African nation send the Gospel across the region over radio waves.
“Broadcasts are heard by many people in Bujumbura, the provinces of Burundi and into the neighboring countries of the Democratic Republic of Congo, Tanzania and Rwanda,” said evangelist Amou Akembe. The radio programs, broadcast in French, Swahili and Kirundi, have resulted in new contacts for Bible studies. World Radio Gospel Broadcasts, based in West Monroe, La., supports the work.
KENYA
NAIROBI — “Jipe moyo” is a Swahili phrase that means “Take heart.”
This year those words had special meaning for Charlotte Hackett, longtime missionary to Kenya, as she

attended the 13th annual Jipe Moyo Women’s Seminar, hosted by the Nairobi Church of Christ, Eastleigh.
Hackett’s husband, Berkeley, died of a heart attack in Nairobi May 21, 2012. He was 70. Charlotte Hackett continues the work.
The theme of the seminar was “A Woman After God’s Own Heart.” More than 100 women attended from rural communities in Kenya. Men from the host church prepared eight meals and two evening teas that included doughy fried bread called mandazi.
“I thought about Berkeley a lot during the seminar,” Charlotte Hackett said. “He was always behind the scenes, taking care of so many things, but for me, at least, he is always there. I see his soul prints everywhere.”
ST. KITTS AND NEVIS
CHARLESTOWN — Ministers and church leaders gathered to discuss soul-winning among the eastern islands of the Caribbean at the 15th annual Caribbean Leadership Workshop. The Government Road Church of Christ, one of two congregations on the island of Nevis, hosted the event.
Presenters were Ulric Allyne of Trinidad and Tobago, Cornelius George of Antigua, Albert Isaac of Anguilla, Gregory Mathurin of St. Croix, Jonathan Servanie of Aruba and Francis Yorke, deputy director of the Jamaica

School of Preaching.
Yorke, who was baptized on the island of St. Vincent, spoke on topics including “Getting Elders in God’s Kingdom.” Though Churches of Christ have spread throughout the Caribbean, few congregations have appointed elders, he said.
SOUTH SUDAN
BOR — Five United Nations peacekeepers from India and seven civilians were shot dead during an attack on a convoy in this East African nation, Fox News reported. A military spokesman blamed the attack on anti-government militants.
Five of the victims were members of a company hired to create a water well for a Christian vocational boarding school in the town of Bor. The school is a work of the Starfish Foundation, a nonprofit organized by Church of Christ members in Texas.
Dennis Cady and Chuck Dennis are supervising the work. The governor of South Sudan’s Jonglei State requested the school, Cady said.
Dennis asked Christians worldwide to pray for the families of those killed.
“Among those who strive for peace — and to help others with their physical needs — there is no way to comprehend the actions that take innocent lives,” he said.
SRI LANKA
COLOMBO — A minister on this teardrop-shaped island, south of India, recently baptized an 83-year-old

woman, her son-in-law and her granddaughter.
“This was my first time helping three generations at one time enter into Christ,” said Asee Darla. The grandmother told the minister that in recent years she had lost her husband and several of her brothers, sisters and friends.
“Several times I wondered, ‘Why am I not taken?’” she told the minister. “Today I got the answer.”

THAILAND
KHON KAEN — Nearly 450 Christians, from 36 Churches of Christ across Thailand and neighboring Laos braved temperatures in excess of 107 degrees Fahrenheit for a recent family camp.
“The lessons from the preachers were great, and all the Bible classes for every age were good,” said Khon Kaen missionary Kim Voraritskul. “I did not hear any complaints — even about the hot weather or the muddy river.
“We thank God for one baptism.”