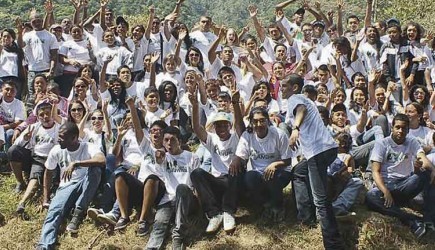 Staff reports
Youths rally in El Valle: Panama event yields record attendance, nine baptisms
A record-breaking 110 youths attended the 10th annual National Youth Rally in the resort community of El Valle, two hours west of Panama City, Panama.
“It was the best ever,” said Tito Miranda, a minister and member of the planning committee. “We had a tremendous guest speaker from Mexico, eight effective discussion groups and nine baptisms, which gave meaning to our entire effort. The young people who attended are now motivated to be better Christians and leaders in their home congregations.”
CROATIA CRIKVENICA — Church members gathered in this seaside city recently for the seventh annual leadership conference of Churches of Christ in Croatia.
“Connected and Held Together in Christ” was the theme. The Christians discussed their congregations’ triumphs and challenges and prayed for the future of their work.
JAPAN ISHINOMAKI — Marlin and Jean Ray, missionaries in the Japanese city of Tomobe, spent four days in the coastal city of Ishinomaki, which was devastated by the March 11, 2011, earthquake and tsunami.
The Rays worked with fellow missionaries Jonathan and Michiko Straker. The Strakers, who assisted in relief efforts after the disaster, moved to Ishinomaki to work full time with a young congregation there.
“They felt the great need for someone to be in that area and work,” Marlin Ray said. “Japan has so few Christians. The Strakers put aside their own plans to become the answer to the prayers of many.”
KENYA LODWAR — Kenyan minister David Marube traveled to this city in the country’s drought-stricken northwest, bearing boxes of sanitary towels for students at a girls’ school.
The school’s principal, Florence Namanang, told the minister that her students miss a significant amount of class time — and even drop out — due to a lack of sanitary products.
“This is why I started knocking doors for funding to help buy the girls sanitary towels,” Marube said. He found a partner in Ruth Orr, a longtime World Bible School teacher and promoter of mission efforts worldwide. Orr helped Marube raise funds for the initiative, though more funds are needed, the minister said.
Marube also has enrolled girls at the school in World Bible School correspondence courses.
MADAGASCAR ANTANANARIVO — Six Christians from Europe and the U.S. traveled to this island nation of 20.7 million souls, east of Africa.
The team worked with two congregations in the capital city and Betikara, a children’s home overseen by Malagasy Christians and missionaries Barry and Stacy Rosie. One team member, Rossemary Angulo from Lausanne, Switzerland, conducted vision clinics and distributed more than 200 pairs of eyeglasses.
PERU NUEVA JERUSALEN — “New Jerusalem” is far from the Middle East, but not far from the Amazon River.
The community, near the Peruvian city of Iquitos, is home to a new Church of Christ, said minister Helmut Garcia.
Church members from Peru’s capital, Lima, and workers from the U.S. hosted gospel meetings, Vacation Bible School and medical clinics for communities along the Amazon. Until a few years ago, there were no Churches of Christ in the communities visited by the team, Garcia said.
“Through this great effort,” he said, “now we have five established … congregations in this jungle area for God’s glory.”