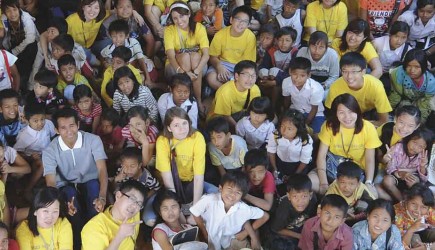 Erik Tryggestad
‘Best week of my life,’ as teens serve at Angkor of Faith
About 90 representatives of church youth groups in Singapore, Thailand, Malaysia, Japan and the Philippines participated in the week-long camp Angkor of Faith 5, ministering to street kids in the tourist city of Siem Reap, Cambodia, famous for the ancient Angkor Wat temples. Katherine Gould, a church member working in China, described it as the best week of her life. “I believe Cambodia and these kids will always be a part of my life,” she said.
AUSTRIA VIENNA — For nearly two years, missionaries in this European capital have invited children to the English Kids Club, a weekly, hour-long program of free English instruction.
“It has given us an opportunity to serve kids, meet parents and deepen relationships,” church planter Jake Haskew said. “This year we have had consistently 10 to 12 kids.”
GAMBIA BANJUL — Lucner Pierre, a minister in Cap Haitien, Haiti, and his wife traveled from the Caribbean Sea across the Atlantic Ocean as part of a mission team to this West African nation.
Lucner and U.S. church members hosted a Bible seminar and gospel revival, said Isaac Daye, a church planter in the tiny nation, where 90 percent of the 1.8 million inhabitants claim Islam as their faith. Other team members were Alan Robertson, a minister for the White’s Ferry Road Church of Christ in West Monroe, La., and his wife, Lisa, and Ben Adkins, director of World Radio Gospel Broadcasts.
The team met Gambia’s vice president, Isatou Njie-Saidy, and told her about the Churches of Christ and their mission in Gambia.
The vice president “was delighted and expressed thanks on behalf of the government to us for our services and religious contributions toward the growth of the nation,” Daye said.
GREECE ATHENS — The Omonia Church of Christ serves refugees who come to Athens from war-torn countries including Afghanistan and Somalia.
“There are thousands of refugees in Athens that live in deplorable conditions, without running water or electricity,” minister Dino Roussos said.
His wife, Debbie, works with the Hellenic Ministries outreach center, where refugee women can take showers and get a hot meal. Most speak neither Greek nor English.
“Through translators, we hope to share the love and compassion of Christ with them as we assist with their needs,” Dino Roussos said.
NEW ZEALAND TAURANGA — “The earthquake was not an act of God. Compassion shown afterward was the act of God.”
That quote appears in  a recent newsletter from missionaries David and Mary Nelson. It’s a paraphrase of something an Anglican priest said in the wake of a 6.3-magnitude earthquake that destroyed much of the city of Christchurch on New Zealand’s South Island.
Members of the Otumoetai Church of Christ in Tauranga, on the country’s North Island, helped families displaced by the quake, which claimed more than 180 lives.
The church has received donations for quake victims, and minister Andrew Gearhart is supervising the church’s response.
“Individuals and businesses in town dropped off items to our church building and then … the church hosted a lunch for 10 families and provided them with food, clothing and furniture,” Mary Nelson said. “Two households were furnished and many new friends were made.
RWANDA KIGALI — The Rwandan government honored church member Holly Hixson and other leaders of Peace Through Business, a program designed to empower women in this African nation.
Hixson is Rwanda coordinator of the program, an initiative of the Oklahoma City-based Institute for Economic Empowerment of Women.
The program selects 30 women and trains them in business practices. Fifteen of the graduates spend a month in the U.S. to acquire additional training, according to New Times, a Rwandan newspaper.