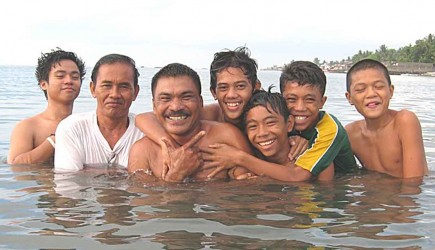 Staff Reports
Missionary Bill Westerberg asked Macalisang to take care of Sunday house church assemblies while Westerberg was on a two-month visit to the U.S. “I taught him and his wife how to make the communion bread,” Westerberg said. “I made some Bible lesson outlines for him. … Emelio did all of that and more. He taught and encouraged the visitors and World Bible School contacts to the point that some of them were ready to be baptized when I returned.”
ALBANIA
BERAT — Albanian evangelist Bledi Valca and U.S. church member Bill Morgan visited five congregations in the Berat region of south-central Albania.
“The churches in the area are losing their financial support at the end of July,” Valca said, “and we wanted to … meet with each preacher and talk about the needs of the church (financial, emotional, physical, training, resources, etc.) and encourage them to keep strong.”
Meanwhile, 240 youths from 12 Albanian churches attended an annual youth rally. Kody Speer, youth minister for the MacArthur Park Church of Christ in San Antonio, was the guest speaker.
AUSTRALIA
MANSFIELD — “It’s not the End of the World” was the theme for the annual Victorian Autumn Camp at Lake Nillahcootie in southeastern Australia.
Fifty-eight Christians from 10 Churches of Christ in five Australian states participated.
INDIA
NEW DELHI — Sunny David ministers for a Church of Christ in India’s predominantly Hindu capital city. He recently produced a CD with a gospel presentation, “All About the Bible,” to teach the people of his home country about Jesus. The minister plans to translate the lesson into Hindi, the dominant language of the region.
The church is constructing a new meeting place, scheduled for completion in October.
ISRAEL
JERUSALEM — Members of Netivyah, a Messianic Jewish ministry supported by Churches of Christ, celebrated Pentecost (“Shavuot” in Hebrew) with a cheesecake competition, minister Joseph Shulam said. The Christians also gave food to the needy.
“It is a very important biblical feast,” Shulam said, “connecting the giving of the Torah in Mount Sinai, the outpouring of the Holy Spirit in Jerusalem and the harvest time.”
TANZANIA
MOSHI — The Riverside Church of Christ, a 45-member congregation that meets at the foot of Mount Kilimanjaro, appointed its first pulpit minister recently.
Immanueli Laurenti Msangi will serve the 13-year-old congregation, planted by missionaries Ken and Ann Bolden in partnership with Charles and Florence Ngoje, Mark and Eunice Sure and Ryan and Lynda Hammitt.
“With this appointment, the church has made a significant step toward turning their hopes from the missionaries to themselves as Tanzanian nationals,” said Charles Ngoje, who now works at the Nairobi Great Commission School in Kenya.
His brother, Ken, is the sole missionary still working with the church. He plans to phase out of the work soon and return to his home in Winyo, Kenya.
UKRAINE
KIEV — The Obolon Church of Christ in this Eastern European capital reports numerous baptisms through its outreach to area prisons.
“We believe that, through this plan, we see the hand of God,” said Viktor Schuka, a prison minister for the church. “God will raise a pipeline of new ministers to save new souls.”
UNITED KINGDOM
COLERAINE — The government of this borough in Northern Ireland — once the site of deadly clashes between British troops and the Irish Republican Army — has recognized the efforts of minister Robert Ritchie to promote peace and reconciliation. Ritchie, who preaches for the Church of Christ in Coleraine, received an award from the city’s mayor councillor, Maurice Bradley.