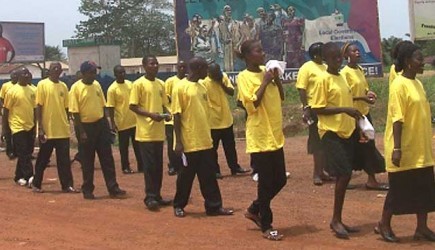 Erik Tryggestad
World Bible School graduates are ‘Marching to Zion’ in West African nation of Sierra Leone
The 24-member Church of Christ in the predominantly Muslim city of Pujehun, Sierra Leone, hosted a graduation for 97 students who completed the World Bible School curriculum. Church members in Louisiana provide support for the Pujehun church. This December workers with Cedar Park, Texas-based World Bible School plan to host a graduation for 200 more students in Sierra Leone. For more information, see www.wbschool.net.
{{MAP}}
AUSTRALIA MANSFIELD — In “the land down under,” seasons are reversed from those in the Northern Hemisphere, so Churches of Christ recently hosted their Autumn Camp.
About 75 people attended the camp at Lake Nilacootie in the state of Victoria. The theme was “Something New Under the Son,” and speakers included Bob Abney, Graeme Offer, Raymond Kirkpatrick, Geoff Thomas, Brett Christensen, Ray and Mark Davison and Philip Dow.
{{MAP}}
CROATIA CRIKVENICA — About 70 church members attended an annual, five-day Bible retreat in this Central European city on Adriatic Sea. Toney Coffey, a minister in Dublin, Ireland, was the guest speaker.
{{MAP}}
EL SALVADOR SAN MIGUEL — The High Pointe Church of Christ in McKinney, Texas, has set up a fund for the family of Antonio Lara. Lara, a longtime minister and church leader in the San Miguel area, died April 25 after he was gunned down in the doorway of the El Platanar Church of Christ.
Survivors include his wife, Milagro, daughter Cindi and son Leo. Mark contributions “Lara Family Fund” and send to deacon Brian Tinsley at the church, 3201 N Central Expressway, McKinney, TX 75071.
{{MAP}}
GUADELOUPE Basse-Terre — Arlin and Pamela Hendrix, missionaries in Lyon, France, ate curried goat on banana leaves and conducted Bible studies on this island in the Caribbean, a protectorate of France.
Arlin Hendrix conducted a three-week series on grace while his wife taught Bible studies for women. The church printed and distributed 9,500 invitations to its community during the visit.
“We make a mission trip to Guadeloupe almost every year,” Arlin Hendrix said. “This French-speaking island has never had a full-time preacher, which is why we go over to help out.”
{{MAP}}
GREECE ATHENS — Members of the Omonia Square Church of Christ reach out to Athens’ large refugee population through an organization called Hellenic Ministries. Members make weekly trips to a facility that offers free showers and laundry services for women and children.
“The women and children are mostly Afghani and Iranian, but recently some from Somalia have been coming,” said Omonia minister Dino Roussos.
{{MAP}}
KENYA MOMBASA — About 270 people sang songs of praise, ate meals together and witnessed baptisms at the National Youth Conference of the Kenya Church of Christ.
Churches in Mombasa hosted the event, which took place at the Changamwe church, said Michael Mutai, principal of the church-run Mombasa Educational Institute.
“It was a very successful conference,” Mutai said. “I keep receiving messages from e-mail and Facebook about it.”
{{MAP}}
NORWAY BERGEN — A small congregation meets in this Scandinavian city, the second-largest in Norway. The church hosted a gospel meeting recently with guest speaker David Hurst, a church member from the U.S.
The church offers private Bible studies and correspondence courses by mail. For more information, see churchofchrist.no.