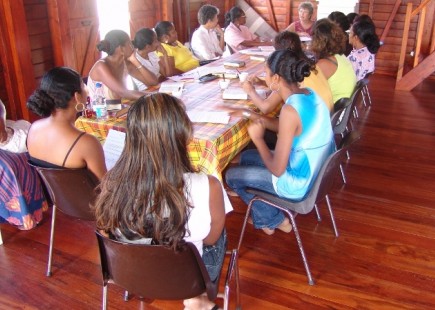 staff reports
RECIFE, Brazil — God gave Alciane Farias time she didn’t expect, so she’s using it to save young souls.
She and her husband, Ricardo, were among the first Brazilians baptized by church planters in Recife in the early 1980s. They raised their two children in the church and now are grandparents.
Then, three years ago, Alciane Farias was diagnosed with an aggressive form of leukemia.
“We watched her weaken as she continued to come to church wearing a white surgical mask,” missionary Michael Pruitt said.
Her hair fell out and she lost her energy, but “she never lost her faithful confidence that God was in control,” he added. “The whole church prayed and prayed for her, but in my heart I felt God planned to take her.”
But last year the congregation rejoiced as Alciane Farias’ cancer went into remission and regained her health.
She and her husband responded to the good news by launching “Project Future,” a ministry for youths in their neighborhood.
The couple takes the youths on trips to the beach and soccer games. They also conduct Bible studies. Many of the youths come from poor, one-parent homes.
Some of the youths — and their parents — accompany the Fariases to church.
“Last month four of these young people turned their lives over to Jesus,” Pruitt said. “All praise be to him!”
ARGENTINA BUENOS AIRES — Carlos Ardila, minister for the Villa Urquiza church, has endured several challenges recently, said Glen Henton, a former missionary in this South American nation.
“Carlos has had to deal with the recent resignation of one of the elders, which then dissolved the eldership for the Villa Urquiza congregation,” Henton said. “It was a very hard time for him, but God blessed him with wisdom and patience to be able to help steer the congregation through it all.”
Some church members who live on the south side of the city left the congregation to begin meeting closer to their homes, avoiding a one-and-a-half-hour commute to the church.
“The parting was peaceful and the Villa Urquiza attendance has held strong, especially since a good bit of outreach is still ongoing,” Henton said.
CANADA QUEBEC CITY — Yann Opsitch, a native of France and a mission coordinator for Abilene Christian University in Texas, spoke during a three-day seminar for the church in Quebec’s provincial capital, where Keith and Jennifer Percell serve as missionaries. Opsitch also preached in the Quebec cities of Saguenay and Baie Como.
“Quebec has a population of over 7 million people and is an important French-speaking mission field with a huge need for more evangelists and teachers — and also a great potential for growth,” Opsitch said.
CROATIA VARAZDIN — Bob and Carra Perkins of the Holland Park church in Simpsonville, S.C., visited congregations in this Central European nation recently.
The couple also visited churches in the Croatian capital, Zagreb, and Lugansk, Ukraine.
“We had several speaking engagements and held Bible classes for individuals as well as the congregations,” Bob Perkins said. “The primary purpose was to encourage our full-time national missionaries and their congregations.
ITALY MILAN — Seventy-five women from eight congregations attended the fifth annual Northern Italy Ladies’ Day,
hosted by the Via del Bollo church, missionary Tammy Short said. Guest speakers came to the event from Ghana and Peru.
ST. KITTS AND NEVIS BASSETERRE — An increased Web presence has helped a small congregation in this Caribbean nation attract visitors, minister Randolph Prentice said. In recent months the church has made it easier for potential visitors to find its phone number and e-mail address. The church has organized tours of the island for visitors after Sunday services.
Prentice reaches his community through a weekly radio program, sponsored by Louisiana-based World Radio Gospel Broadcasts.
TRINIDAD AND TOBAGO BARRACKPORE — Carlton and Joslyn Ramsubhag, former missionaries to the Caribbean island of Dominica, have returned to their home island of Trindad to launch a mission effort in Barrackpore. The small city is home to about 20,000 descendants of Indian indentured laborers, brought by the British to Trindad in the 1830s to work on sugar cane plantations.
James Andrews, an evangelist from Hunstsville, Ala., and a team of 13 from Ooltewah, Tenn., will assist the couple with a campaign this month.
UKRAINE DZERZHINSK — Evangelist William L. Wharton spent two recent Sundays preaching in this eastern Ukrainian city. Shauna Jarvis, whose husband ministers for the Central church in Valdosta, Ga., taught Bible classes for women.
Wharton’s Russian/Ukrainian Ministry provides funds to feed impoverished children at schools in Dzerzhinsk. The Meridian Woods church in Tallahassee, Fla., oversees the ministry.
“Thank you very much for helping me,” Olga Pavlukova wrote in a letter to Wharton. “I never have breakfast at home and I am very happy to have a good meal at school.”