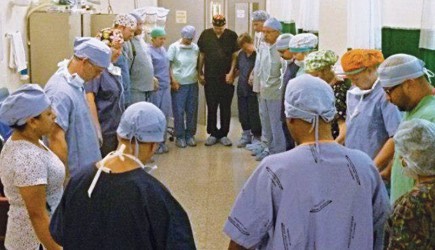 Around the World, January 2013

BRASILIA —  The three couples that comprise an evangelistic team in Brazil’s capital city met with representatives of their sponsoring churches in the U.S. and Brazilian church members for the third “Breakthrough Brasilia” workshop.

“It was especially encouraging to see the Brasilia church leaders and evangelists take the lead in describing and analyzing the current situation of the work and proposing plans for future growth and maturation,” said Bryan Gibbs, a church development specialist with Great Cities Missions.

SAN SALVADOR — Herald of Truth reports that nearly 30 “Iglesias de Cristo” (Churches of Christ) El Salvador have participated in a multimedia evangelistic campaign. Tim Archer, Steve Ridgell and Rigoberto Vargas, along with Salvadoran preachers, conducted a four-day gospel meeting in 12 different congregations in and around San Salvador. The result was 55 new contacts and at least three baptisms.

Members of 16 congregations gathered for a combined worship service.

PORT-AU-PRINCE — David and Charlene May, members of the Eagan Church of Christ in Minnesota, will move to Haiti in January to begin a three-year stint as overseers of a guest house for short-term workers and mission interns.

The house is a ministry of the Estes Church of Christ in Henderson, Tenn., and is in the Port-au-Prince neighborhood of Santo, near the Sonlight Children’s Home and Nutrition Center.

The Mays also will assist the director of the children’s home, Roberta Edwards, who provides a home school for the children living there.

The Mays will serve as Haiti childcare facilitators for Orphan’s Lifeline International, a nonprofit supported by Churches of Christ. The couple will help oversee two orphanages supported by the nonprofit in Port de Paix and Cap Haitien. David May will teach, preach and help mentor Haitian evangelists.

Each graduate works with three congregations. Before completing the program, students conducted a gospel campaign that resulted in 16 baptisms and 150 enrollments in a Bible correspondence course, Chandrapaul said.

PITESTI — Between 450 and 500 Christians, representing 20 Churches of Christ, attended the All Romania Workshop, hosted by the Pitesti congregation.

“According to many Romanian brethren, it was a great time of revival and much encouragement,” said Harvey Starling, a member of the Midway Church of Christ in Jasper, Ala., which works with seven Romanian congregations.