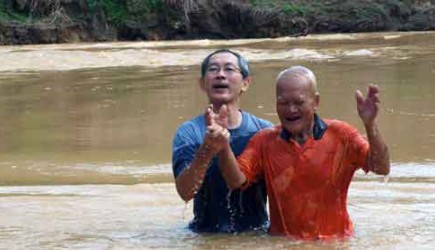 Around the World, January 2011

Erik Tryggestad
Born again in Borneo
Tuai Rumah Sunok, 82, is the headman of a rural village Kg Nanga Stamang in Sarawak, a state of Malaysia on the island of Borneo. He studied the Bible with Ong Chee Yong, a church member in the city of Johor Bahru, Malaysia, just north of Singapore. Ong leads regular mission trips to Sarawak.
“Brother Sunok’s baptism has paved the way for more from the village to follow,” Ong said. “Remarkably … on the very night we preached to him, he made a swift decision to be baptized.”
AUSTRALIA SYDNEY — Matt and Tish Harris met with seven church-planting teams from Australia and New Zealand at a recent Christian conference in Sydney.
“One of the most significant messages we heard during the conference was the struggle that Australian churches experience regarding training and maintaining leadership,” Matt Harris said. “Although we do not have all the answers, one of our main desires and challenges in Australia will be to train disciples who will lead churches long after we are gone.”
The Harrises plan to move to Ipswich, a suburb of Brisbane, Australia, to plant churches.
The Kings Crossing Church of Christ is collecting funds for the work. For more information, see www.teamipswichaustralia.com.
BRAZIL RECIFE — Missionary Randy Short conducted his 11th two-and-a-half-hour study of theology with students at the School of Bible in Boa Viagem, a neighborhood in Recife.
“What a sheer blessing it has been to be with these folks hungry to learn the Gospel,” Short said. The class presented Short and his wife, Kathy, with gifts.
The best gifts came later, when six of the students were baptized, Randy Short said.
GAMBIA BANJUL — “Finishing the unfinished task” was the theme of the annual joint worship service for Churches of Christ in this tiny West African nation.
Appropriately enough, the 223 attendees worshiped in the unfinished building of the Kanifing Church of Christ, said minister Isaac Daye. The minister challenged his fellow Christians to raise funds to complete the 300-seat facility, for which the church broke ground in 2008.
Daye seeks funds to complete the facility. For more information, contact the Center Street Church of Christ in Fayetteville, Ark., at (479) 442-8752.
GERMANY NECKARZIMMERN — About 80 church members attended a recent men’s retreat in this southern German town.
“The retreat helps me to stay in contact with preachers and leading members from the whole German speaking part of Europe,” said Ivan Voser, a missionary in Thun, Switzerland.
“Though the unity of German-speaking churches is growing, I am disturbed over the kind of issues that still start off quarrels and split churches,” Voser said.
JAPAN TOMOBE — Members of the Tomobe church said goodbye to Kimiko Usami, who died recently after a five-year battle with cancer. Usami was a leader among the women of the church and was active in Hitachi Christian Camp, said missionary Marlin Ray.
“She helped everyone she could, especially foreigners,” the missionary said. “She was a Christian as Paul described. Her husband, who is not a Christian, was surprised to see so many people at her funeral (about 200). About three-fourths of the people there were Christians.”
NIGERIA KURA — In this northern Nigerian town, a bus driven by church members struck a young Muslim boy who was carrying a heavy load of sugar cane and walked into the highway.
The church members were returning to Igarra from Kano, where minister Sylvester Imogoh spoke at a youth rally.
The boy’s left ankle was fractured, and the church members paid for his treatment, Imogoh said.
Christians from Kano helped the Igarra church members deal with local authorities.
“We were neither touched nor harassed,” Imogoh said. “Both our brethren and Muslims in that area attested to the fact that God was with us.”
UNITED KINGDOM BRISTOL — Members of the Bedminster Church of Christ gathered in a hall near their outskirts of this British city to plot their “20/20 Vision” — a plan for the next 10 years.
Church members addressed the congregation’s strengths, weaknesses, and vision for the church in 2020, member Geoff Daniell said.
“Everyone contributed their thoughts,” Daniell said. “No ambition was considered too wild.”