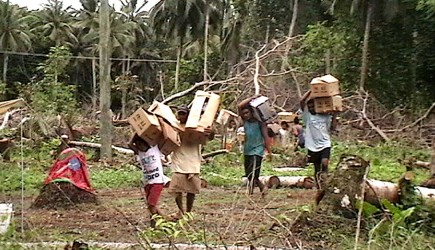 Around the world, January 2010

Church members make muddy trek to deliver relief supplies in Samoa
SAALEAUMUA, Samoa — A group of Samoans carried relief supplies, donated by church members, to this village in the South Pacific. Many people in the village lost their homes in a late-September tsunami and continue to live in tents, said Luaao Soli, who grew up in the village.
Soli now lives in the neighboring U.S. territory of American Samoa, where he serves as minister and elder of the Nu’uuli church. He and his son, Abraham, and Lynn Ashley, an elder of the Tafuna church in American Samoa, delivered fluorescent lights, pillows, mosquito nets, boxes of nails and New Testaments to the villagers.
“So we want to thank all the brethren from the United States and from other places that sent help through the Nu’uuli and Tafuna Churches of Christ,” Soli said.
{{MAP}}
BELARUS MINSK — Church members in Judsonia, Ark., loaded 20,000 pounds of humanitarian aid onto a container bound for this former Soviet nation. The supplies will be shared with hospitals, clinics, disabled groups and orphanages in Belarus, said John Kachelman, minister for the Judsonia church.
“This shipment is a part of the United States Department of State humanitarian aid efforts targeting urgent needs in Eastern Europe,” Kachelman said. A Belarus public charity, “Parusa Detstva” (“Sails of Childhood”) partnered in the effort.
{{MAP}}
CZECH REPUBLIC OLOMOUC — Sarah Beall and Sarah Keen, members of a mission team in this Central European city, host group activities for mothers who want to expose their children to English. The missionaries teach the children English nursery rhymes, songs and fairy tales.
The mothers with toddlers group is “a great success and a wonderful way to serve the community while at the same time building relationships,” team member Mitch Anderson said.
“If you’re thinking about missions in Europe, it has to be outside of the box,” he added. “We greatly need to find new inroads to these post-Christian cultures.”
{{MAP}}

FRANCE LA ROCHELLE — This port city on the Atlantic Ocean once was home to the Knights Templar and later the Huguenots.
Hubert and Raymonde Noblet hope it soon will be home to a Church of Christ.
The retired couple from Reims, France, surveyed the city recently with Bren and Cheryl White, who oversee Operation French World. The Whites plan to return to La Rochelle with members of the Castle Rock, Colo., church later this year to canvass the city with invitations to Bible studies. For more information, contact the Whites at [email protected].
{{MAP}}
GHANA KUMASI — Fifteen American church members taught Bible classes on streets, at bus stops, in markets and on the beach during a two-week campaign in the Central, Eastern and Ashanti regions of this West African nation.
Nearly 500 baptisms resulted, said Joel Coppinger of World Bible School of Tulare County in Visalia, Calif. The ministry worked with the Mesa, Ariz., church in the campaign.
“In a small fishing village shaded by the coconut palms we taught several hundred and baptized 187 in one day,” Coppinger said. “It was a beautiful sight to see two or three being baptized at a time in the Atlantic Ocean.”
{{MAP}}
GUATEMALA SANTA CRUZ DEL QUICHE — About 2,400 young people from Churches of Christ across Guatemala attended a National Youth Conference in Santa Cruz del Quiché recently.
The lectures and classes focused on the themes of friendship, love and marriage. Speakers included Leonardo Rojas from Barquisimeto, Venezuela; Luis Fernando Rosas from Fort Worth, Texas; and Juan Monroy from Madrid, Spain. Monroy attended the conference representing Herald of Truth Ministries in Abilene, Texas.
{{MAP}}
SWITZERLAND THUN — As unemployment rises in this European nation, the Thun church is looking for ways to cut costs, missionary Ivan Voser said. The church was paying a full day’s rent for its Sunday meeting place, despite using the facility for two hours. The church recently began hosting Sunday worship in a room at a restaurant that is closed on Sundays.
“It will be another transitional place where we will probably stay for a few months,” Voser said. “The church is glad about the new meeting place, which fits better our budget.”
{{MAP}}
UGANDA KAMPALA — The Kampala church has launched a “Lean on Me Ministry,” a support group to allow Ugandans to share their struggles and hold each other accountable, said minister Isaac Sanyu.
“Together as a group, the participants (have) the ability to be encouraged and to rest knowing that no one individual is all alone in whatever they are going through,” Sanyu said.