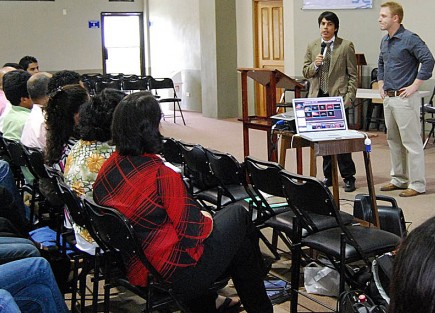 Around the world, January 2009

staff reports
BELIZE BELIZE CITY — Many people in this Central American nation are living in community centers after recent floods drove them from their homes, said Lincoln Jones, an evangelist in Belize City. Church members have assisted people affected by the floods in communities including Flowers Bank, Jones said.
Floodwaters remain in communities including Orange Walk Town. Some residents may not be able to return to their homes for weeks, Jones said.
BRAZIL PORTO ALEGRE — Churches of Christ have existed in Rio Grande do Sul, Brazil’s southernmost state since 1967, but have suffered divisions for reasons including lack of leadership and personality conflicts, said Matthew Rehbein, a missionary in Porto Alegre.
“Thankfully, this situation is beginning to change,” he said.
The church in Viamao, the first in the state to appoint elders, organized a day of fellowship and worship for four area congregations recently. Rui and Nadia Diogo, missionaries with the Viamao church, hope to make the gathering an annual event involving all 11 congregations in the state, Rehbein said.
EL SALVADOR SAN MARCOS — The 16th Confraternity of Christian Women brought 190 church members, representing 16 congregations, to the church in San Marcos, five miles south of San Salvador. Silvia Castellanos was the guest speaker.
GERMANY ROTHENBERG — More than 70 Christians from 11 countries participated in the recent Euro-American Family Retreat in this medieval city. Phil Jackson, facilitator for European church planting for Bedford, Texas-based Missions Resource Network, coordinated the program.
Keynote speakers were Jay Jarboe, minister for the Sunset church in Lubbock, Texas; Craig Young, a missionary in Marseille, France; and Bart Rybinski, vice president for European operations for Eastern European Mission in Vienna, Austria.
Hawatthia Jones and Byron E. Benitez, missionaries in Guatemala, conducted a program for teenagers. A team of church members from Dallas, led by Linda McCrary, presented a program for children.
GREECE KECHRIES — Christian women from Bulgaria, Romania, Russia, Ukraine, Nigeria, the Philippines, the U.S. and Greece gathered in ancient Corinth for the seventh annual Philadelphia conference recently. In Bible times the port city where the group met was known as Cenchrea, the home of a first-century church and Phoebe, a Christian who likely delivered Paul’s letter to the church in Rome.
Lee Burgess of Nashville, Tenn., taught classes on the theme “God’s will in our life,” said coordinator Eleni Melirrytos.
NIGERIA WARRI — Members of the Normandie church in Los Angeles and the Fifth Ward church in Houston traveled to this port city, a hub of Nigeria’s oil industry and the site of attacks on foreign oil workers, to host a daylong lectureship recently. More than 1,300 people attended. The church members also conducted open-air preaching events and spoke about faith on a local television program during the visit.
PAPUA NEW GUINEA EMAGAVE — More than 700 people attended the national “Kibung” (“Gathering” in Pidgin) of Churches of Christ, hosted by the church in Emagave, a village in the highlands of this South Pacific nation. Workers from Lae and Alotau, both in Papua New Guinea, and Perth, Australia, were among the attendees.
“It was great to meet lots of Christians from around Papua New Guinea,” said Jeri Ford, who serves with her husband, Craig, in Alotau. Churches in Alotau will host the Kibung in 2010, she said.
SOUTH AFRICA JOHANNESBURG — Leaders of churches here agreed to put “long-standing wrangling” behind them during a joint worship service, church member Appiah Wilson said.
The Downtown church hosted the service, which included members of the Central Johannesburg church, churches in Chief Luthuli Springs and Etwatwa and several visitors, Wilson said. The churches’ leaders agreed to share ideas and continue meeting.
The Central Johannesburg church hosted another joint worship recently.