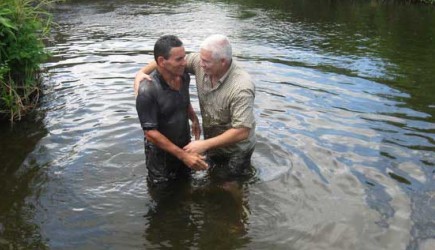 Around the World, February-March 2010

Erik Tryggestad
Winning souls, planting churches in the heart of Cuba
Santa Clara, Cuba, founded in the late 1600s, sits near the geographic center of the island and was the site of the final battle of the Cuban Revolution in 1958. Minister Edelto Villa has helped plant seven churches in Santa Clara and the surrounding region. He also works with about 25 Cuban evangelists — some in the extreme eastern city of Guantanamo.
“God has allowed through his grace that many folks in the center (of Cuba) are worshipping Jesus — and in the right way, the way he intended for us in his covenant,” Villa told The Christian Chronicle.
Villa is one of 34 Cuban evangelists supported by the Gulf Shores, Ala., Church of Christ with assistance from the White Rock Fund in Texas. To help support the work or for more information, see www.gulfshoreschurchofchrist.org.
{{MAP}}
ALBANIA DURRES — Anila Kafexhiu and other members of the Durres church in this southeastern European country hosted a community worship service for women recently. About 70 attended.
“God was glorified in this event and … God has provided new opportunities for people to hear the whole story of Jesus,” said Kafexhiu’s husband, Cimi, the church’s minister.
{{MAP}}
BRAZIL CURITIBA — Podcasts from ministers in this South American city now can be viewed on YouTube.
In celebration of their 50th podcast, church members have switched from an audio to video format. The latest podcasts feature inspirational talks by Joao and Edson Cruz, interviews, answers to questions submitted by viewers and a performance by an a cappella group — all in Portuguese.
Watch the podcast.
{{MAP}}
CAMBODIA PHNOM PENH — After serving a Cambodian Church of Christ in Texas, Sokhom Hun and his wife, Phaline, have returned to their home country to spread the Gospel and train church leaders.
Sokhom Hun spent the first 23 years of his life in Cambodia and suffered near-death experiences at the hands of the Khmer Rouge, the totalitarian regime of Pol Pot. He and other members of the Cambodian church in Balch Springs, Texas, have made mission trips to Cambodia.
The Walnut Hill Church of Christ in Dallas sponsors the work. The church “feels this is a unique opportunity to develop an effective mission work because of Sohhom’s and Phaline’s understanding of the language, culture and history of Cambodia,” the congregation’s elders said in a news release.
{{MAP}}
CANADA MONTREAL — After more than six years of ministry in his native Quebec, Michael Mazzalongo and his wife, Lise, are moving to Choctaw, Okla., to work with their supporting congregation.
“Our original goal was to help reorganize and grow this congregation,” Michael Mazzalongo said of the Verdun Church of Christ in Montreal. “These twin objectives have been reached, and I have recruited a young minister to replace me.”
{{MAP}}
CROATIA ZAGREB — Church members here hosted a farewell worship service for Vlado and Renata Psenko recently. The couple has served churches in Zagreb and surrounding areas for about 18 years. They will move to Vukovar, a city in eastern Croatia that suffered heavy damage during the Eastern European conflicts of the early 1990s.
“We were thankful that this dedicated Christian couple chose one of the hardest spots in Croatia — the war-torn Vukovar — but at the same time it was not easy to see them leave,” said Mladen Jovanovic, minister for the Kuslanova church in Zagreb.
{{MAP}}
LIBERIA HARBEL — Youths from 22 congregations in this West African nation gathered for an annual lectureship at the Firestone rubber plantation in Harbel, about 35 miles from the capital, Monrovia. Liberian minister Arthur David was a guest speaker. One youth was baptized during the lectureship.
{{MAP}}
TOGO KARA — Missionaries hosted their second monthly training session for church leaders among the Kabiye people of northern Togo recently.
Missionary Matt Miller led a study of Bible passages that describe the actions of good leaders — including verses in Philippians and Ephesians.
“The Kabiye leaders also developed their statements of vision, mission and core values, which will shape all of our work in the future,” said Miller’s wife, Andrea. “We are so encouraged to see the way the spirit of God is filling these leaders with dreams and visions for what they want to accomplish in Togo.”
For more information, see www.togoadventures.net.
{{MAP}}
UGANDA MBALE — In 2009, the Church Planting and Discipleship Ministry helped establish 27 new congregations in this East African nation. Minister James Luchivya, who oversees the ministry, announced the number at a recent prayer and planning meeting attended by church leaders from Kenya, Uganda and Sudan. The ministry plans to plant additional churches this year, Luchivya said.