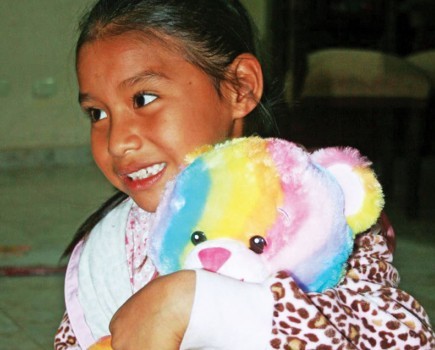 Around the World, February 2013

STAFF REPORTS
DOMINICAN REPUBLIC
SANTO DOMINGO — Christians from across North and South America gathered in this Caribbean nation, which shares the island of Hispaniola with Haiti, for the 49th Pan American Lectureship.
Nearly 2,000 Christians from the Santo Domingo area gathered with lectureship participants for Sunday worship.
“What a wonderful way to have your spiritual battery recharged,” said Allen Dutton Jr., a missionary in Campinas, Brazil.

FRANCE LYON — The Church of Christ in Lyon hosted a screening of “Courageux” (“Courageous”). The popular Christian film tackles the importance of fathering.
The church hosted a time of discussion and refreshments after the film.
“The next day I did a follow-up sermon on the resolutions made in the movie about their responsibilities as fathers,” missionary Arlin Hendrix said.
INDIA
BONGAIGAON — This city and several others in the northeastern state of Assam endured severe flooding in mid-2012. Churches of Christ across southern India responded, collecting money and relief supplies for the victims.
Four ministers distributed the aid, which included rice, flour, dhal (lentils), sugar, cooking oil, soap, toothpaste and tea through Churches of Christ in Assam.
The supplies aided 217 families, said David Martin, a minister in Chennai, India.
ISRAEL JERUSALEM — Fear and uncertainty are part of daily life for Arabs and Jews in this Middle Eastern nation, said Joseph Shulam, a Christian minister.
Fighting between the Israeli military and Islamist groups in the Gaza Strip has claimed lives. Recently, the United Nations General Assembly voted to formally recognize Palestine as a nonmember observer state. Some applauded the vote while others, including U.S. officials, called it detrimental to the peace process.
Shulam asked Christians worldwide to pray for peace in the troubled region. His ministry, Netivyah, is supported by Churches of Christ.

LIBERIA GANTA — Peace has prevailed in this West African nation, nearly 10 years since the end of a decades-long civil war, minister David Kolleh said.
Churches of Christ in the country’s rural communities are taking advantage of the nation’s stability, gathering in one village twice per year for fellowship, door-knocking and evangelism.
About 150 church members representing a dozen congregations gathered in the village of Ganta to help the small church there reach its community with the Gospel. The campaign resulted in three baptisms and many new contacts, said Kolleh, who preaches for the Iron Gate Church of Christ in Gbarnga, Liberia.
NETHERLANDS ANTILLES
SABA and STATIA
— Church members are working to win souls and plant churches on these islands in the Caribbean, according to Bren White, director of Operation French World, a ministry of the Laurel Church of Christ in Maryland.
Marlon Lawrie, minister for the Phillipsburg, St. Marten, Church of Christ, and his wife, Subrena, are partnering with the ministry in the work, White said, as are students from Lipscomb University in Nashville, Tenn.