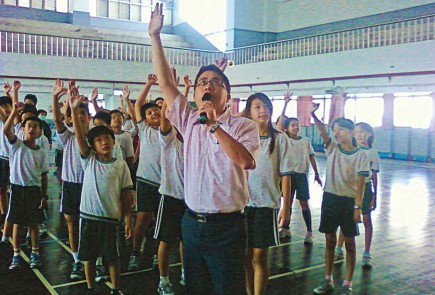 Around the World, February 2012

Erik Tryggestad
In Taiwan, minister teaches that true love waits
John Yo, who preaches for the Taichung Church of Christ in Taiwan, teaches sex education courses in public schools, using Bible verses including 1 Timothy 4:12, “Don’t let anyone look down on you because you are young, but set an example for the believers in speech, in conduct, in love, in faith and in purity.” For more information, see taichungchurchofchrist.blogspot.com.
AUSTRALIA MELBOURNE — “More than Conquerors: Lessons from Joshua” was the theme of Camp Revive, a three-day retreat for teens and young adults of the Belmore Road Church of Christ.
Missionary intern Daniel Lauer spoke at the retreat and his wife, Chelsey, led a devotional for women.
BELARUS MINSK — Evangelism is difficult in this Eastern European nation. The country’s politics and economy resemble that of the Soviet Union, which included Belarus until it dissolved in the 1990s.
Nonetheless, about eight to 10 Churches of Christ meet in this nation of 9.6 million people, said mission worker said J.C. Enlow. The Walnut Church of Christ in Texarkana, Texas, helped to win souls in Minsk.
Enlow and Matt Mitchell traveled to Minsk to teach a two-day seminar to church members there. Enlow is executive director of 21st Century Global Missions, a Fulton, Miss.-based ministry that supports ministry training efforts in Latin America, West Africa and Eastern Europe.
KIRIBATI TABWAKEA — A small mission team traveled to this village on Christmas Island in the Pacific Ocean to work with two Churches of Christ. The team conducted Bible studies and gospel meetings. After 10 days of studying the Scriptures, a 57-year-old man named Teangirao and his 24-year-old son, Mikaere, were baptized in the ocean, said missionary Randy English.
LATVIA RIGA — Wayne Brewer and Robyn Miller, Christians from the U.S., and Loyda Avilaone, a church member in Mexico, traveled to this Baltic republic recently to conduct a lectureship.
Brewer presented lessons on the Sermon on the Mount, and Miller and Avilaone conducted classes for women.
PHILIPPINES ILIGANl — More than 1,000 people died in the wake of Typhoon Washi (also known as Tropical Storm Sendong), which devastated Iligan and other cities in the Mindanao region of the Philippines.
Church member Salvador Cariaga and a team of 40 workers are on the scene doing relief work, said Glen Dods, president of church-supported Shepherds Hill International.
“The greatest immediate need is for money donations,” Dods said. For more information, see www.shepherdshill.org or contact Shepherds Hill International, P.O. Box 3131, Abilene TX 79604.