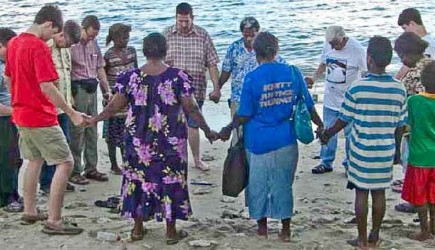 Around the World, February 2011

Erik Tryggestad
Praying for the Pacific: Guadalcanal campaign yields soul
The South Pacific island of Guadalcanal, the site of a bloody campaign during World War II, recently was the site of a gospel campaign. Karina Morgan, who lives on Guadalcanal, studied the Scriptures with members of an eight-man mission team. When asked to read a passage from Acts 19, “Karina could no longer keep back the tears,” missionary Randy English said. “She wept as she expressed her joy in having learned what to do to become a New Testament Christian.”
CAMBODIA PHNOM PENH — Cambodians mourned the loss of more than 350 people killed in a stampede during the country’s annual water festival. Students at the Bible English Study and Training center lost aunts, uncles and close friends, said Julie Broyles, who oversees the church-supported center.
“One man interviewed said people just kept saying, ‘Help me. Please help me,’ until their voices grew silent,” Broyles wrote in a blog post. She said the incident was a stark reminder of the souls in Cambodia that need rescue.
“People are running out of time all around us,” she wrote. “People … are wanting to learn, waiting to be rescued, but (there are) not enough rescuers.”
Read the post at juliebroyles1.blogspot.com.
GERMANY RAMSTEIN AIR BASE — Gen. Roger A. Brady, the Air Force’s top commander in Europe, retired recently as the longest-serving Air Force officer currently on active duty.
Brady, commander of U.S. Air Forces in Europe (USAFE) since 2008, and his wife, Litha, attended the Kaiserslautern Church of Christ.
“General Brady is leaving an enduring legacy,” said Air Force Chief of Staff Gen. Norton Schwartz. “During his tenure, he made transformational improvements in USAFE’s readiness and mission effectiveness, as well as in the quality of life for USAFE’s airmen and their families.”
INDIA TIRUPPATI — A team of preachers and medical workers traveled to this town, north of Chennai, to heal the sick and preach the Gospel, said Paul Renganathan, a church leader in Chennai. A mobile clinic treated 288 patients.
“Having seen the Christian compassion through the medical care, many wanted to follow the Lord Jesus Christ,” Renganathan said. Thirty people were baptized.
JAMAICA KINGSTON — When students at a local high school stopped attending an after-school program at the Mona Church of Christ, the congregation took the program to them instead.
Church members make regular visits to the school to help children with their homework, the Jamaica Observer reported. The congregation sponsors several other benevolence programs for at-risk teens in Kingston. Minister Michael Dunbar told the Observer that assisting children in their education is good for the church.
“You want them to get familiar with the church, so that if there is any problem in their life … they can come and share their issues instead of going elsewhere,” Dunbar said.
SWITZERLAND GENEVA — Church members stuffed 36,319 envelopes recently, offering their services to residents near their church building, said Doyle Kee, deacon for local evangelism.
“An organization is in place to respond to the numerous calls and letters that are expected from this mass communication to the people of this area of Geneva,” Kee said.
TRINIDAD AND TABAGO BARRACKPORE  — Sheila Butt, a newly elected state representative in Tennessee and member of the Anderson Bend Church of Christ in Duck River, Tenn., was a guest speaker at the Annual Overnight Ladies Retreat. Butt is the author of inspirational books for women, including “Seeking Spiritual Beauty.”
About 200 church members attended, said event coordinator Joslyn Ramsubhag.
Peggy Coulter, of Christian book company Publishing Designs, also spoke at the event.
UKRAINE FEODOSIYA — About 600 Christ-ians and visitors gathered near the banks of the Black Sea to hear the message of salvation, said minister Dino Roussos.
Minister Sasha Prokopchuk directed the seminar in Crimea, an autonomous republic under the jurisdiction of Ukraine that occupies a peninsula on the northern Black Sea. Roussos, a minister for the Omonia Church of Christ in Athens, Greece, also spoke at the seminar, which yielded 15 baptisms.
After a sermon, Roussos asked all preachers present to join him for a prayer.
“Twenty-three preachers, representing many Churches of Christ in Ukraine, came forward, and I prayed that God will bless their work and ministry,” he said. “It was an unforgettable day.”